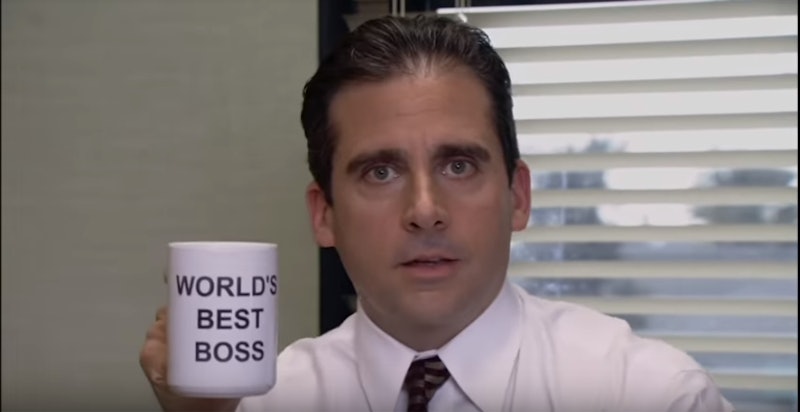 If the backdrop of your life is just the continual binge-stream of all nine seasons of the hit TV series "The Office," firstly, you're not alone. Office stan-dom is real. But secondly, might I suggest you commemorate your love for the comedy series with an easy "The Office" Halloween costume so you can show off your "Office" obsession to the world? Do the lovable, hate-able, and downright bizarre employees of Dunder Mifflin Paper Company proud this Halloween season.

"The Office" characters are super easy to emulate in Halloween costume form, since honestly, most of them just don usual business casual office wear. But with a few specific touches and props, you can ensure your "The Office"-inspired look is both recognizable and memorable. Heck, you can even gather up your BFFs for hilarious "The Office" group Halloween costumes, too.

In any case, we've put together six easy peasy costumes to help you dress as a few of our favorite "The Office" characters, plus some inspirational looks from the most iconic episodes that every fan of the show will immediately recognize. Check out these "The Office" Halloween costumes that are easy to put together.

Ah, Pam. Gotta love her. Sweet, polite, and relatively normal (for Dunder Mifflin standards, anyway), Pam is the office receptionist who usually holds things together. Her look is super easy to recreate in Halloween form: A practical uniform of button down tops, simple cardigans, and pencil skirts are the go-to. Put your hair back with a lil' clip as a finishing touch.

Socially awkward, full of odd interests and talents, and overall freaking bizarre, Dwight is definitely the office weirdo - but also might be one of the most hilarious, fan-favorite characters. His look is iconic and easy to recreate for Halloween with a few simple pieces. Just don't forget to use an entire bottle of hair gel to achieve that infamously immovable center part.

Dwight During The "Fun Run"

What better version of Jim than Jim on Halloween? While there are lots of Halloween episodes of "The Office," who could forget the season 5 classic during which Jim rocks a decidedly low-effort costume that consists of his usual business look with a simple, red-trimmed "Hello My Name Is" name tag that says "Dave." Classic, hilarious, recognizable, and as a costume, really easy to throw together at the last second.

Michael Scott, AKA the "World's Best Boss," is the comically idiotic leader of Dunder Mifflin's office. Pay tribute to Steve Carrell's most memorable character by donning a simple black business suit, white button down shirt, and of course, the most iconic "World's Best Boss" mug as a prop for easy identification. Extra points if you use it as your bring-your-own-cup at bars or Halloween parties.

OK, remember that episode where dunce boss Michael promises to pay the tuition of a bunch of high school students? Well, the moment rolls around where he's finally expected to keep his promise and, well... he doesn't, of course. Commemorate this iconic episode by dressing as one of "Scott's Tots" students and donning one of the show's classic tees and a simple pair of jeans. Very uncomplicated, yes, but any fan of "The Office" will immediately get it.