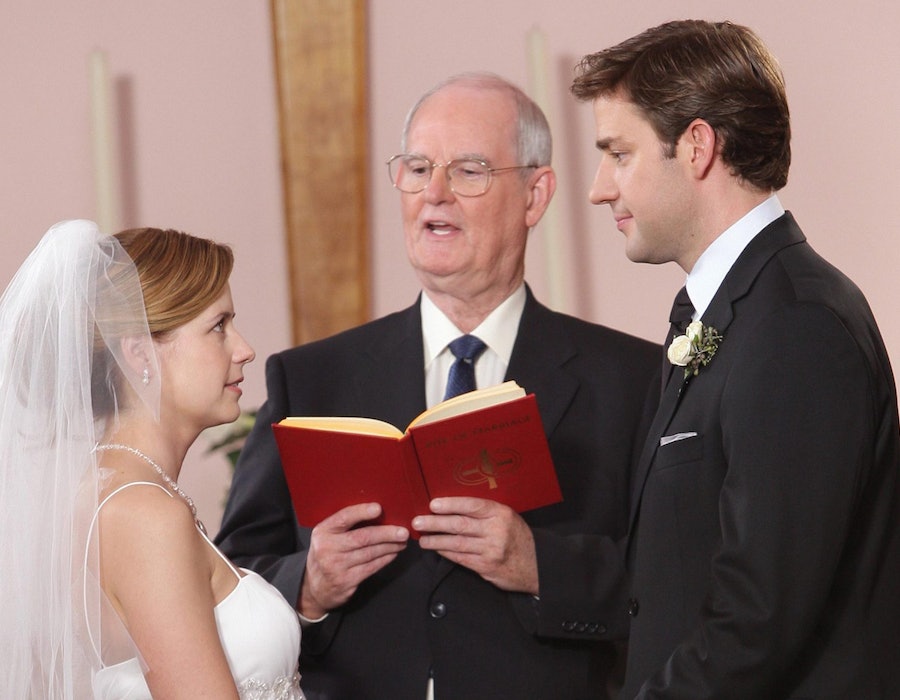 In this excerpt from their new book, Welcome to Dunder Mifflin: The Ultimate Oral History of The Office, Brian Baumgartner and Ben Silverman — the actor behind fan-favorite character Kevin Malone and a longtime The Office producer, respectively — talk to the cast and crew about shooting Jim and Pam’s onscreen wedding.

Brian Baumgartner: Were you worried that when Pam and Jim finally got married, it would screw things up?

Jenna Fischer: I wasn’t, because we had been together now for a couple seasons. So I think the question was: Can they get together and be a stable couple, and will we still care? I remember having a conversation with Greg, and he was like, “what’s going to lose people is if we just keep manufacturing these weird ways to keep them apart. That’s exhausting and it’s not realistic. And so what we’re going to need to do is bring them together and then give them obstacles to overcome as a couple.” So rather than obstacles that keep them from being a couple, give them obstacles to break through as a couple.

Like Pam wanting to go to art school or Jim wanting to start his own business or having their first kid or whatever. Things where they’d have to weather the storm together, which is more interesting and realistic. What’s not gonna be satisfying is if they get together at the end of season nine after multiple affairs. Everyone’s going to be like, “Yay ... I guess. Congrats? I hope you enjoy your marriage with all your horrible baggage.” Not a happy ending.

In season six, it was time for Jim and Pam to finally tie the knot, and the entire office went to Niagara Falls for the wedding. Much like Jim and Pam’s relationship, the shoot for this episode had many obstacles. It was a real “everything that makes it harder makes it better” situation.

Paul Feig: We were going to shoot on this boat, the Lady of the Mist or whatever.

Brian Baumgartner: Maid of the Mist.

The Maid of the Mist has been taking tourists on a boat tour of Niagara Falls (well, the river below the falls) since 1846, and it’s carried passengers like Marilyn Monroe, Stephen Hawking, Princess Diana, and Mick Jagger.

Jim and Pam plan a church wedding, but when they realize that it is becoming more about the guests than each other, they sneak off to get married in secret on the Maid of the Mist. So the first obstacle? Shooting on location on an actual boat on the river below Niagara Falls.

Paul Feig: It brought so many logistical things that it was hard to invest in the emotion of it at first. I was so worried, like, are we going to get soaked? Is the camera going to screw up?

The camera didn’t screw up. But they did get soaked, which was not ideal for our hair department head, Kim Ferry.

Kim Ferry: Both [Jenna and John] got soaked the first take, it was awful. There was no electric on the boat and it was for the wedding scene. We were told by the producers, “Look, we did three runs [on the boat] to test everything, and it’s going to be fine because no water ever came up on the boat.” And then we get out there and we’re near the falls, and all of a sudden it’s like whooooosh. It just soaks both of them.

Debbie Pierce: What did you do?

Kim Ferry: I started laughing. And then we just went with it. That’s why [Jenna’s] hair changed, because it was so drenched on the boat, we couldn’t go back again. We had to keep filming. They’re like, “Can you fix it?” I’m like, “Are you kidding me right now? With what?”

And if everything wasn’t complicated enough, John Krasinski had the flu.

John Krasinski: I remember showing up and I can’t walk, I’m so sick. One of the most romantic moments in the show, I’m not actually kissing Jenna. I’m kissing her cheek because I didn’t want to get her sick. I was like dire sick.

Brian Baumgartner: I think for that moment, you should have just gotten her sick.

John Krasinski: That’s an awful thing. But that’s why I did a big Humphrey Bogart–like twist kiss away from the camera.

Brian Baumgartner: When you walked on the boat, the two people behind you were my parents in real life. Do you remember that?

John Krasinski: Oh my God, now I remember, yes. Paul [Feig] was in his suit in the blue tarp and, as nicely as he does, he was like, “These are Brian’s parents.”

Jim and Pam return to the church to have a second ceremony in front of all their friends and family. What viewers don’t know is that another scene was supposed to happen in that moment.

John Krasinski: The horse was going to go off the cliff.

That’s right. Greg’s idea was that Roy would interrupt the ceremony with a grand gesture, riding in on a horse. Somehow Dwight gets a hold of the horse and rides it away from the church.

Paul Feig: Originally, Greg had this insane idea that Dwight was going to ride a horse over Niagara Falls.

Greg Daniels: Dwight is at the hotel, and he’s looking at all these photos of animals going over the falls, and Roy shows up on a horse to try and win Pam back. He abandons the horse, and Dwight puts it together and he gets on the horse and he starts going over the falls, riding a horse, and then he realizes it’s a terrible idea. He jumps out at the last minute. And while Pam and Jim are getting married, a horse goes over in the background. Everyone’s just screaming at me. They were like, “You can’t have a horse die at the moment of maximum romance!”

Paul Feig: We were just like, “I don’t know if we want to kill a horse at Jim and Pam’s wedding.” He fought for it and fought for it.

Greg Daniels: I was really committed to this story line of Dwight riding a horse over the falls, to the extent that I scouted the pool of water that the horse was going to fall into.

John Krasinski: Up until shooting, that was in there. I think it was Rainn, he was like, “even I think this is nuts.”

Greg Daniels: We routinely made changes of that size after a table reading, just not with such big stakes. Basically, the script that Mindy and I wrote, and we read at the table, had a horse going over the falls in the background after all the romantic stuff with Pam and Jim having their own private ceremony on the Maid of the Mist after their wedding. But it was beset by problems. It was part of a Dwight story and I meant for it to balance the unabashed romance of the A plot, but after the table reading, the cast sat me down and told me I was wrong and I listened to them. It was like an intervention of normal people in the life of a comedy addict.

Greg changed his mind, which meant Paul Lieberstein and the writers had to come up with a totally new concept for the wedding ceremony.

Paul Feig: It was a very last-minute thing. We had like a day or two. And that wedding video was all over the internet.

“That wedding video” captured the nuptials of Jill Peterson and Kevin Heinz, who picked Chris Brown’s “Forever” for their walk down the aisle—with a choreographed twist. The bridal party danced and strutted, and the groom even somersaulted. The video was uploaded to YouTube in July 2009 and, as of this writing, has been viewed more than one hundred million times.

Paul Feig: It was kind of the perfect setup. And then when we were shooting in that church all day, I mean, it was so much to shoot that we were running out of time. Literally, I had like a half hour left. I was like, “I don’t even have time to get this dance number!” So we’re going to have maybe two takes at it. And the first time they did it, it was gold. It’s just like, that’s it. Drop the mic.

Now they had footage of us dancing down the aisle at the “official” wedding and separate footage of Jim and Pam’s secret wedding on the Maid of the Mist. The next challenge came in the editing room, where Paul and Claire had to figure out how to fit both ceremonies together.

Paul Feig: We decided to intermix the dance number with the wedding, and we just burst into tears. I mean, I still get so emotional watching that because it’s so beautiful. The way that it goes back and forth between the two.

Claire Scanlon: There’s the last scene of Niagara where Jim and Pam are on the bow of the boat, and he puts his arm around her and looks right into the camera. It’s not even cocky, it’s just a sweet smile, like, “I got her.” John and Jenna came into my bay to see it. They were like, “We need to see this show. We need to sign off on this.” And after they watched it, I turned around and they’re both bawling. For the poignant moments, all you want is to make people cry. It was really a sweet moment to be a part of their journey and be a witness to it.

One of the satisfying things about getting to make a TV show for so many seasons is that you have the room to show real change. By the end of season six, the wedding of Jim and Pam, and their discovery that they’re pregnant, didn’t feel like a check in a box. It felt real. Hundreds of people flocked to the Pam and Jim wedding website (halpertbeesly.com) to write messages in the guest book, congratulating the fictional happy couple.

But falling in love with these characters just made it even more difficult when one of them decided to walk away, as we were about to find out.

From the book, Welcome to Dunder Mifflin: The Ultimate Oral History of The Office. Copyright ©2021 by Brian Baumgartner and Ben Silverman. Reprinted by permission of Custom House, an imprint of HarperCollins Publishers.

'Welcome to Dunder Mifflin: The Ultimate Oral History of The Office'
Bookshop
More like this
Ashton Kutcher Wants Danny Masterson “To Be Found Innocent” In Rape Retrial
By Jake Viswanath
This 'Gossip Girl' Wardrobe Error Has Gone Viral On TikTok
By Alyssa Lapid
All The ’70s Easter Eggs You Missed In 'That ’90s Show'
By Grace Wehniainen
'Abbott Elementary' Fans Probably Missed This 'Parent Trap' Easter Egg
By Sam Ramsden
Get Even More From Bustle — Sign Up For The Newsletter
From hair trends to relationship advice, our daily newsletter has everything you need to sound like a person who’s on TikTok, even if you aren’t.