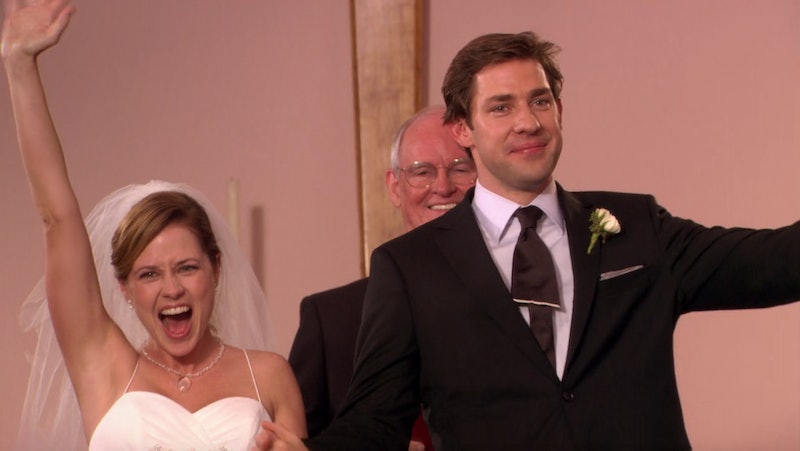 Ten years ago, Jim Halpert and Pam Beesley became husband and wife — but their now-famous ceremony was almost crashed by a four-legged friend. While reminiscing about the episode with Entertainment Weekly, director Paul Feig revealed that Jim and Pam's wedding on The Office had an original ending which would have involved Pam (Jenna Fisher)'s ex-fiancé literally riding off into the sunset on his own.

To celebrate the episode's tenth anniversary, Feig — who directed "Niagara" — executive producer Greg Daniels, and writer Mindy Kaling took part in an oral history for EW, where they reflected on the original idea for the pair's big day. "All throughout the episode, Roy’s (David Denman) been kind of haunting around and unhappy that they’re getting married, so when they ask if anybody has reason why this couple can’t get married, he rides into the church on a horse to sweep Pam off her feet like a knight in shining armor," Feig recalled.

Thankfully for "Jam"-shippers everywhere, Dunder-Mifflin's receptionist never hesitated in her love for Jim (John Krasinski), and, in this original ending, Pam turned her ex down. "She sends him away, so he has to ride his horse back out of the church," Feig continued. "But then, in an absolute insane thing, they had this crazy ending where Dwight (Rainn Wilson) gets the horse and rides it into the falls."

Though Feig added that most of the creative team recognized that Dwight riding a horse over the falls was a "really dark and weird" idea, Daniels told EW that he fought for the horse to stay in the episode. "Dwight got fascinated with this historical display at the hotel that talked about various animals [surviving going over the falls]," Daniels explained. "And he came up with this theory that you could survive going over the falls if you were riding a horse, because a horse would have the instinct of how to swim properly."

Despite his dedication to the idea, once the table read rolled around, Daniels realized he was the only person who still thought it was funny: "The entire staff and actors were yelling at me: 'Don’t ruin Jim and Pam’s wedding with a horse!'" he said. However, losing the horse storyline left an opening for another "big moment" in Jim and Pam's wedding, which is how the writers decided to add in a scene where Michael (Steve Carell) and the Dunder-Mifflin crew decide to recreate the viral video where the wedding party dances down the aisle to Chris Brown's "Forever."

"That video was so joyous and fun," Kaling told EW. "That was obviously that couples’ friends and family, and we thought it would be pretty funny and misguided for Michael to equate the co-workers of the office as Jim and Pam’s beloved close family and friends and do the same thing." However, she explained, after seeing how much fun everyone was having rehearsing, they figured out a way to have Jim and Pam enjoy the moment as much as their co-workers. "If they hadn’t done the secret wedding [on the boat], them coming down and dancing would have been horrible and ruined the moment," Kaling said.

Ultimately, "Niagara" became one of The Office's most famous and beloved episodes, which Fisher credits to Jim and Pam's enduring relationship. "I’m really proud that we created this healthy version of a relationship and didn’t wait until the last episode to see them get together," she said. "There’s no cheating, there’s no crazy weird breakups and makeups. They just gently weather the storm." And as newer generations of fans discover the show on streaming services, Fisher told EW that she's "honored" the show is still touching people and making them laugh.

Jim and Pam's wedding may not have had the dramatic ending that the writers originally thought up, but some last-minute ingenuity and an sentimental secret wedding made it one of the most enduring Office episodes of all time.

More like this
'Friends' Star Maggie Wheeler Offers Support To Matthew Perry After Reading His Memoir
By Alyssa Lapid
Anne Hathaway Shared A "Thrilling" 'Princess Diaries 3' Update
By Darshita Goyal
This 'Gossip Girl' Wardrobe Error Has Gone Viral On TikTok
By Alyssa Lapid
All The ’70s Easter Eggs You Missed In 'That ’90s Show'
By Grace Wehniainen
Get Even More From Bustle — Sign Up For The Newsletter
From hair trends to relationship advice, our daily newsletter has everything you need to sound like a person who’s on TikTok, even if you aren’t.