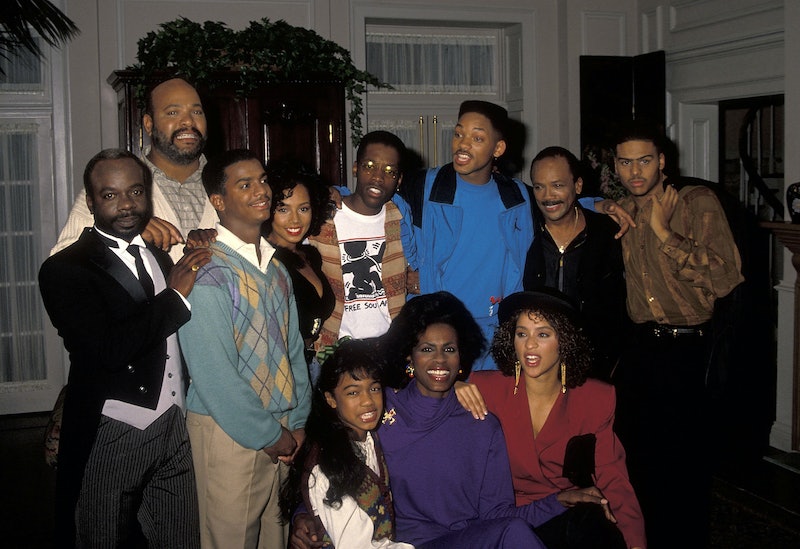 The Banks family is having a "for real family reunion," including estranged family members and a hashing out of differences. Will Smith shared a series of photos teasing the upcoming Fresh Prince of Bel-Air HBO Max special on Thursday, Sept. 10, to celebrate the anniversary of the show's original debut in 1990. And he revealed that Janet Hubert, the original Aunt Viv, will appear on the Fresh Prince reunion, despite years of public conflict between her and Smith.

"Today is exactly 30 YEARS since The Fresh Prince of Bel-Air debuted!" Smith wrote on Instagram, along with a photo of himself and several of his costars — including Alfonso Ribeiro, Tatyana Ali and DJ Jazzy Jeff — in the Banks family's living room. "We’re doin’ something for y’all… a for real Banks Family Reunion is comin’ soon to HBO Max!" Smith added, before paying tribute to the late James Avery, who played Uncle Phil.

In addition to the cast photo, Smith also shared a snapshot of himself speaking with Hubert, who played Aunt Viv on the sitcom for the show's first three seasons. In 1993, the role was mysteriously recast with Daphne Maxwell Reid, who played Aunt Viv until Fresh Prince ended in 1996. (Reid can be seen with the rest of the Banks family in Smith's first photo.) At the time, the decision was chalked up to creative differences, but over the years, both Smith and Hubert have shared their own sides of the story with the press — along with plenty of negative comments about one another.

Shortly after her departure from the show in 1993, Hubert told Jet magazine that Smith — who was an executive producer on the series — was the one responsible for replacing her. In response, Smith called her out for "dog[ging] me in the press" during an interview with an Atlanta radio station, and claimed that the conflict began because Hubert wanted to be the main star of the show. "I can say straight up that Janet Hubert wanted the show to be The Aunt Viv of Bel Air Show," Smith said at the time. "She said once, 'I’ve been in the business for 10 years and this snotty-nosed punk comes along and gets a show.' No matter what, to her, I’m just the Anti-Christ."

In 2009, Perez Hilton reported that Alfonso Ribeiro had broken his silence on the whole situation during a stand-up comedy set. "Long story short, there were days when we were all on the set and she would literally go off on people and they got to a point by the time the second season came around where we're like, 'This is unacceptable,'" Ribiero reportedly said. "We felt like, when we were doing The Fresh Prince of Bel-Air, that we were a family … She, at that point, ruined that, and she made it very difficult for us to work, and unfortunately she was then fired."

However, not long afterwards, Hubert started publicly firing back at the cast — and Smith in particular. "There will never be a reunion … as I will never do anything with an assh*le like Will Smith," she told TMZ in 2011. Two years later, she told The Insider that Smith and Ribiero were "bad kids” who did “some heinous, horrible things to me," and that she felt "demonized" in the years after leaving the show.

In 2016, Hubert made a Facebook video in which she called out Smith for not doing more to support the rest of the Fresh Prince cast, implying that she was fired for asking for a raise. And just one year later, she wrote on her Facebook page that she had "no interest in seeing any of these people on that kind of level," and that there would "never be a true reunion" without her. It's unclear what has happened in the years since Hubert made those comments to make her even consider attending a reunion, let alone actually committing to it, but it looks like she and Smith may be ready to settle their differences, once and for all.

The Fresh Prince of Bel-Air reunion special is expected to premiere on HBO Max around Thanksgiving.