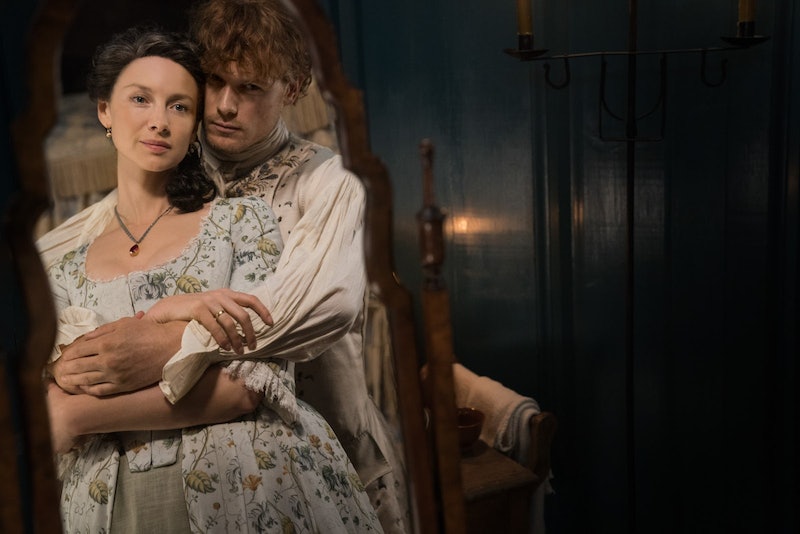 After almost a year-long wait, Outlander is finally back. And if Outlander Season 4 follows the book ending for Drums Of Autumn, we're in for an explosive ride.

Never a show that shies away from a cliffhanger, the end of Season 3 saw heroine Claire Fraser and her partner Jamie stranded on the Georgia coastline following a shipwreck in 1766. It's a less than ideal situation, though they're probably just happy to be out of Scotland and able to put their dangerous years in Paris and Jamaica behind them. Drums of Autumn picks up with Claire, Jamie, Ian, and Fergus attempting to start a new life in the American colonies. We first see them traveling to Charleston and Wilmington, before they eventually settle in North Carolina. Unlike previous installments of Diana Gabaldon's book series, most of Drums of Autumn is set in the couple’s home area, and it's actually quite cute to see Jamie and Claire settle into domestic bliss.

In the book, Fergus has left his wife, Marsali, behind in Jamaica as she is expecting their first child; we already know from Episode 1 that the TV show deviates from this, with Marsali accompanying them along for the ride and revealing her pregnancy. As if that isn’t complicated enough, there are new players to contend with. As the group moves to North Carolina to be near Jamie’s family, it becomes clear very quickly that his manipulative Aunt Jocasta has her own agenda. Like most of the characters in Outlander, Aunt Jocasta has a pretty tragic past that's made her a tough, formidable woman. Jamie is pretty accustomed to manipulation and temptation, so it doesn’t phase him. But Claire struggles under her watchful eye.

To add a little bit more drama, the antagonist Stephen Bonnet is also introduced. We meet him in Episode 1 of Season 4, as he's waiting to be hung. Though the Frasers help him to escape, he later turns on them, robbing them with a crew of bandits and stealing the jewelry Claire took from Geillis along with her gold wedding band. And that's only the beginning of his reign of terror.

The story also picks up with Claire and Jamie’s daughter, Brianna, in the 20th century, where she's joined by her love interest Roger Wakefield. Brianna’s curiosity about her mysterious past leads her to look into her family history. In doing so, she discovers reports of Jamie and Claire's death in a fire and decides to travel back through the stones to try and rescue them. Being the doting suitor that he is, Roger goes after her. When he arrives in Scotland, he assumes his former name, MacKenzie. Brianna then journeys to Lallybroch where she meets her aunt Jenny, uncle Ian, and cousin Jamie. She also encounters Laoghaire, who comes to confront her when she discovers she is claiming to be Jamie's daughter. Eventually, Brianna and Roger both make the journey to America separately, with Brianna accompanied by her maidservant, Lizzie.

Back over the pond, Jamie and Claire are settling into life in America, though they have their fair share of skirmishes along the way, including being attacked by a bear. Settled in near to Jamie's aunt Jocasta, Claire is walking by the river when she spots Jamie's son William. His father Lord John is already waiting for them back home, as the pair had taken a detour on their trip to Virginia. John subsequently falls ill and is nursed by Jamie, before John and William continue their journey. But this isn't the only child Jamie is reunited with during the course of the book.

In one of the most anticipated moments of the story, Brianna meets her father Jamie for the first time. However, her journey to him is far from straightforward. Reunited with Roger in America, the pair make a promise together and consummate their relationship. But shortly afterwards, she discovers he knew about her parents' death and didn't tell her, so they go their separate ways. It's during that time that Brianna is raped by Bonnet, becoming pregnant and taking back possession of her mother's ring.

Brianna's handmaid mistakenly thinks Roger, or as she calls him "MacKenzie," is the one who forced himself on Brianna, which leads to him being almost beaten to death by Jamie and sold to Native Americans. Brianna continues to hunt for Roger, eventually sketching a portrait of him for her father. It is only then that they realize who "MacKenzie" actually is. Brianna subsequently reveals to her father that it was Bonnet who assaulted her. Claire and Jamie attempt to correct their error and retrieve Roger, leaving Brianna in the care of Aunt Jocasta at River Run, who seeks to find her other suitors. Claire and Jamie's pursuit of Roger gets very complicated: he makes an unsuccessful attempt to escape and gets accused of murder. His freedom is eventually traded in return for Ian.

On the return to River Run, Claire and Jamie reveal to Roger that Brianna is pregnant, but it might not be his child. He eventually decides to stay in the 18th century, returning to Brianna to take her hand in marriage and raise the child as his own. Bonnet, meanwhile, is sentenced to hang for separate crimes, and Brianna seeks to meet him one last time. Things get predictably complicated when she does: Bonnet has a plan to escape from jail that involves setting the building on fire. He succeeds and makes away to a waiting ship, handing Brianna a black diamond for the baby's care.

More like this
'Heartstopper' S2 Just Welcomed Four Brand New Cast Members
By Nola Ojomu and Sam Ramsden
Here's When 'The Crown' Season 5 Will Premiere — And What To Expect
By Bustle Editors
The BBC Is Adapting A Best-Selling Novel About A Mistaken Killer
By Darshita Goyal
How A Location Blunder Changed The Outcome Of 'The Capture' S2.
By Darshita Goyal
Get The Very Best Of Bustle/UK