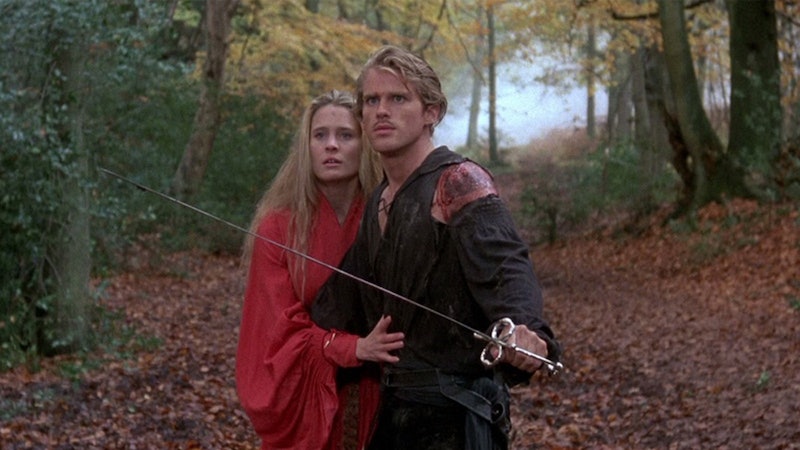 A Princess Bride reunion with almost all of the iconic film's stars in attendance? As you wish. On Sunday, September 13 at 7 p.m. EST/4 p.m. PST, the cast of The Princess Bride will reunite for a virtual table read of the 1987 romantic comedy, as part of a fundraiser benefiting the Democratic Party of Wisconsin. According to Deadline, fans who sign up and donate any amount to support the state's Democratic party will receive a link to watch the table read, as well as a Q&A session with the film's director Rob Reiner, and comedian Patton Oswalt.

Cary Elwes — who starred as Westley a.k.a. the Man in Black — shared the news on Twitter, where he also threw in plenty of references to some of the film's most iconic moments. "#Inconceivable! I’m excited to announce a virtual #PrincessBrideReunion!" he wrote, adding that he will be joined by his fellow stars, Robin Wright, Chris Sarandon, Mandy Patinkin & many more!" Elwes concluded his post by comparing President Donald Trump to the film's villainous monarch, Prince Humperdinck, using the hashtag, "#DumpTrumperdinck."

Elwes and the cast of The Princess Bride are hoping to use the reunion as a way to raise money and support for the Democratic candidates in Wisconsin, which will be a key state in the upcoming 2020 presidential election. “I think most people are aware by now that Donald Trump has completely abdicated his duties as President to represent and stand up for all Americans," the actor said in a statement to Deadline. "If America is going to have a real chance at healing we must get rid of Trump. And that is only possible if we win Wisconsin. I am thrilled to be part of this very rare reunion of my colleagues from The Princess Bride as a way to increase awareness and garner resources for the state that will determine the fate of America."

Based on the novel by William Goldman, The Princess Bride centers on Princess Buttercup (Wright), who is being forced into a marriage with the unsavory Prince Humperdinck (Sarandon) after her true love, Westley is believed to have died at sea. As she tries to find a way to escape his clutches, she is assisted by the Man in Black, and his new friends, the down-on-his-luck Inigo Montoya (Patinkin) and bodyguard Fezzik (the late Andre the Giant). Along the way, the group battles Rodents of Unusual Size, a six-fingered murderer and of course, death — or mostly death — itself.

Though it was first released back in 1987, The Princess Bride has remained a beloved classic in the minds and hearts of fans everywhere. In April, Elwes and Wright held a mini-reunion to announce that the film would be made available to stream on Disney+, with plenty of references to the classic in their brief video. A few months later, Reiner and the cast announced that plenty of celebrity Princess Bride fans — like Joe Jonas and Sophie Turner, Jennifer Garner, Jack Black and Hugh Jackman — would come together to release a fan-created version of the movie on Quibi, which was filmed entirely during quarantine.

"I just thought, Can we remake an entire movie at home?" Jason Reitman, who directed and edited the created movie told Vanity Fair in June. "I just started reaching out to actors I knew, saying, ‘Is this something you’d want to do?’ And the response was kind of immediate and fast. It was like, 'Oh — that sounds like fun.'" He encouraged all of the stars involved to put their own, homemade spin on their favorite scenes, leading to goofy continuity errors and moments like Jonas and Turner offering up a gender-swapped impression of Buttercup and Westley.

"What’s nice about [The Princess Bride] is that I made a film that’s lasted so long. Now it’s [been] over 33 years," Reiner told Vanity Fair about the film's enduring legacy. "And the biggest kick I get out of it is that kids who saw it when they were eight or nine years old have kids that age now, and they’re seeing it and liking it. It seems to have stood the test of time."

More like this
'Friends' Star Maggie Wheeler Offers Support To Matthew Perry After Reading His Memoir
By Alyssa Lapid
Hilary Duff Is “Optimistic” About A 'Lizzie McGuire' Reboot
By Alyssa Lapid
Kukulkan From 'Wakanda Forever' Has A Surprising Connection To Marvel History
By Grace Wehniainen
Reese Witherspoon Confirms This Fan Favorite Will Return For 'Legally Blonde 3'
By Jake Viswanath
Get Even More From Bustle — Sign Up For The Newsletter
From hair trends to relationship advice, our daily newsletter has everything you need to sound like a person who’s on TikTok, even if you aren’t.