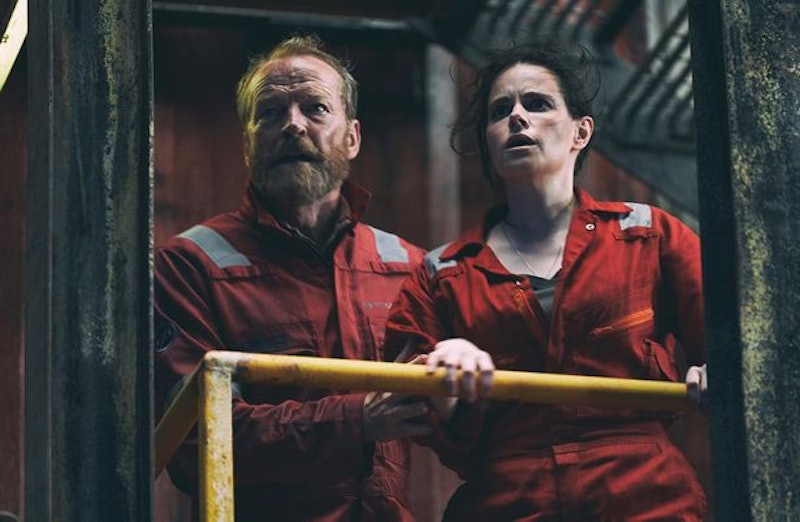 Season 1 of Prime Video’s The Rig has proven to be a hit. The series challenges viewers to think about the climate crisis through an advisory story of what could happen if there is continued damage to the environment. Season 1 ended with a cliffhanger, leaving viewers on the edge of their seats as, spoiler alert, the rig was destroyed. But will there be a Season 2 in the future?

Currently, there is no official announcement concerning The Rig being confirmed for a second season. The finale left it open for many characters to return such as Mark Bonnar, Emun Elliott, and Cameron Fulton. Line Of Duty’s Martin Compston’s character Fulmer Hamilton also managed to escape in the end. But the future of Calvin Demba’s Baz, is a bit more ambiguous. It looked like Baz had faded into the spores of the ancestor at the end of S1, as he remained on board the now-destroyed rig.

The Rig is heavily inspired by the climate change crisis. The series’ writer David Macpherson said: “Unfortunately, we are in a situation now where climate change is not a future issue; it’s a now issue. It’s already started. It’s something that we need to get ready for and take seriously.” Equally, though, he reassures viewers that The Rig “is not meant to be a lecture.”

Filmed in Scotland, The Rig revisited a hot spot location that previously featured in Marvel’s Avengers films. Should the show come back for a second round, it’ll likely make use of Scotland’s filming opportunities once more.

More like this
'Bridgerton' S3 Will Show A *Very* Different Side To Kanthony
By Sam Ramsden
'The Last Of Us' Has Officially Been Renewed For Season 2
By Darshita Goyal
Rupert Grint Just Shared A *Major* Update About Ron Weasley’s Future
By El Hunt
Turns Out George Clooney Is A Huge Fan Of This Classic British Game Show
By El Hunt
Get The Very Best Of Bustle/UK
Sign up for Bustle UK's twice-weekly newsletter, featuring the latest must-watch TV, moving personal stories, and expert advice on the hottest viral buys.