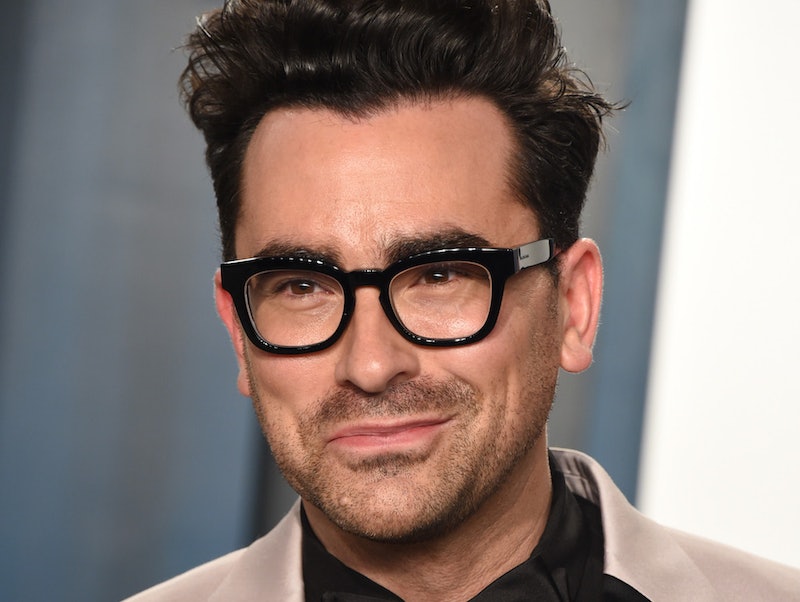 It was a Schitt’s sweep at the 2020 Emmys, but there was some awkwardness behind-the-scenes (and, no, it didn't involve the hazmat suit-wearing trophy giver). About half of the Schitt’s Creek Emmys party attendees had to be uninvited, according to Dan Levy, after a change in Canada’s COVID-19 guidelines. The newly-minted Emmy winner appeared (virtually) on Jimmy Kimmel Live on Tuesday alongside Eugene Levy, his father, co-creator, and co-star, as well as co-stars Catherine O’Hara and Annie Murphy to discuss the intimate viewing party they held on Emmys Sunday, where all four stars won big in their respective categories.

According to Levy, the party they held in that glamorous tent in Toronto was actually supposed to include more of the Schitt's Creek family. "We had a big party planned," he explained. "In Canada, you can have a larger gathering because Canada has been doing good when it [comes] to the COVID." However, in "true 2020 fashion," government guidelines changed abruptly, meaning they had to cut the party in half the night before the gathering. "We had a last-minute uninvitation ceremony, which had to happen for our lovely crew, which we were so excited to share the night with,” Levy explained. “It was a strange kind of vibe going into the evening.”

His father, Eugene, cited the spike in numbers of cases across the entire province for the uninvitations. When Kimmel inquired about who specifically had to make those uncomfortable calls, Levy said, “Not us.” Eugene added, “I was the first one to say ‘not me.’”

The wins were a huge celebratory moment for many — especially Canadians, like Levy and his fellow cast mates. The CN Tower, the observation tower in Downtown Toronto, and the new Toronto sign were both illuminated in gold to celebrate the Canadian sitcom’s sweep at the virtual ceremony. And on Twitter, a video montage of Sarah Levy, Levy’s sister and Schitt’s Creek co-star, went viral for her nonstop screams as her brother, father, and co-stars swept all major comedy categories. “She’s not OK,” Levy joked on Kimmel. “We have not heard from her since, so very unclear on her status at this point.”

More like this
Owen Warner's Net Worth Might Surprise 'I'm A Celeb' Fans
By Sam Ramsden
Ciarán Griffiths Is Making His 'Corrie' Comeback
By Catharina Cheung
Meet Kelly Fisher, Dodi Fayed’s Ex-Fiancée
By Karen Fratti
'Doctor Who's New Companion Has Been Winning Acting Awards Since She Was 18
By Shahed Ezaydi
Get Even More From Bustle — Sign Up For The Newsletter