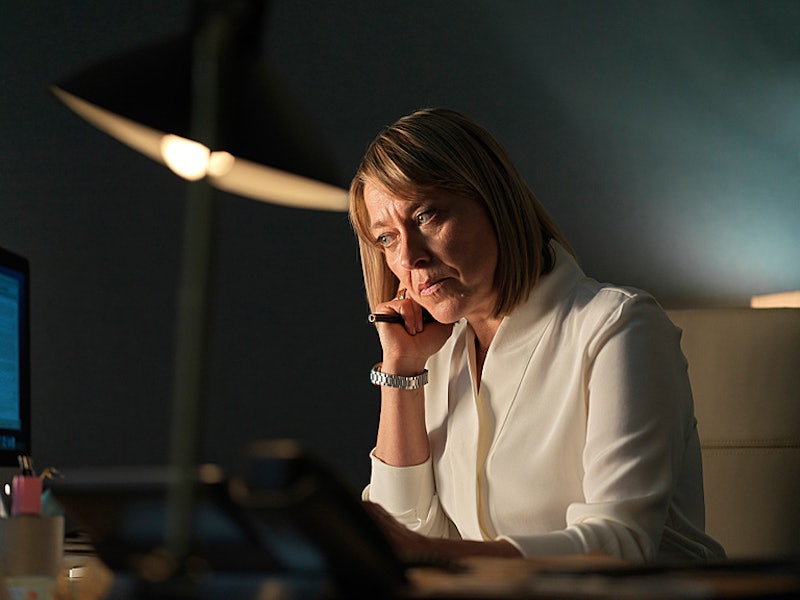 Returning for its third and final series, BBC One’s The Split is going to be intense. Not least because we finally reach the actual split... Picking up ten months from where season two left off, Hannah (played by Nicola Walker) is facing the realities of divorcing her husband Nathan (Stephen Managan). Following yet another “shocking revelation,” those plans are questioned, per the synopsis. But writer Abi Morgan has teased that The Split Season 3 ends in a wedding. But whose?

“We’re building towards a marriage,” she revealed during an interview with Radio Times. “Whose marriage could it be? It could be anybody’s, so I’m excited about that.” When asked whether weddings were inevitable in a series about divorce, Morgan pointed out that the last episodes of the first two seasons also feature nuptials. “This show is a collision of a family, at the best and worst of times,” she told the BBC, “and I always think weddings are the one thing you can go to where you can’t complain!”

Nicola Walker is obviously privy about said wedding belles IRL, but won’t spill the exact details. “The brilliant thing I’m allowed to reveal is the series ends with a wedding,” she told The Mirror, “but I can’t tell you whose it will be.” Fiona Button, who plays Rose, also confirmed that this mystery wedding will take place.

The Split’s third and final season may be ending on a high, but that doesn’t mean you should neglect to have some tissues in arms reach. “[There is] lots of lovely warmth and joy and hope,” director Dee Koppang-O’Leary told Radio Times, “but there are quite a lot of sad elements in it.”

Despite this sadness, Walker is satisfied with how The Split concludes. “Endings are difficult,” she told the BBC. “I think Abi has managed to create a really satisfying ending, and we don’t get that in drama much anymore.”

More like this
'Happy Valley's Ending Was *Almost* Entirely Different
By El Hunt
'Consent' Is Not Just One Person’s Story, But Hundreds
By Shahed Ezaydi
Wait, Is 'Happy Valley' Not Actually Over?
By Darshita Goyal
6 'Happy Valley' Easter Eggs You May Have Missed
By Sophie McEvoy
Get The Very Best Of Bustle/UK
Sign up for Bustle UK's twice-weekly newsletter, featuring the latest must-watch TV, moving personal stories, and expert advice on the hottest viral buys.