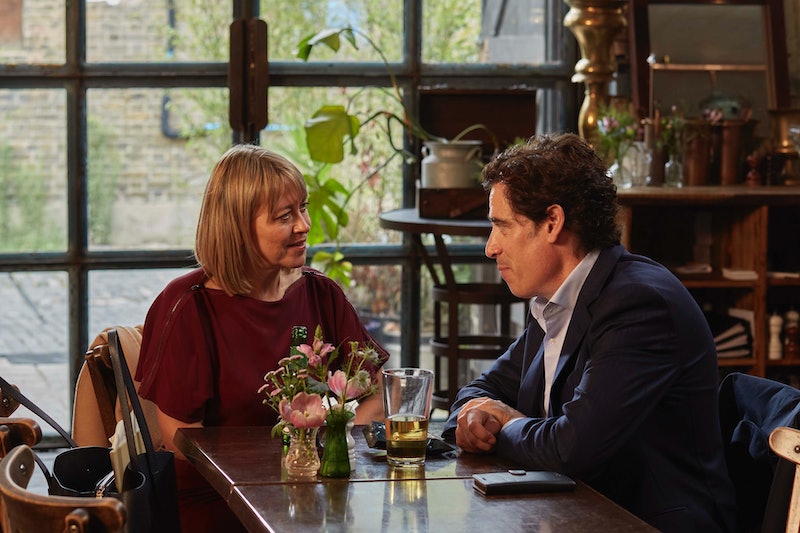 The BBC’s hit legal drama The Split is set to return for its third and final outing. Following a family of high-flying lawyers negotiating the divorce cases of London's elite, actors Stephen Mangan and Nicola Walker will continue to lead the cast in the show’s “heart-breaking” finale. And, it’s just been announced that BAFTA and Emmy award-winning writer, Abi Morgan OBE (River, Suffragette, The Hour, The Iron Lady), will make her directorial debut, having previously written and created all three seasons of The Split.

“It has been a complete joy to direct, and to finally get to work with the brilliant cast and crew, and be part of the magic that happens between first read through, and final edit that I normally don’t get to see,” said Morgan, in a statement sent to Bustle. Filming began in June 2021, per Radio Times, and first look images give us a look at the Defoe’s return. Here everything you need to know about The Split series 3.

Set within the brutal and fast-paced world of London’s high-end divorce circuit, The Split revolves around the lives of the Defoe family (sisters Hannah, Nina, and Rose, and no-nonsense mother Ruth) as they negotiate messy legal cases, and navigate personal issues within the family.

In series 3, viewers will witness Hannah face the complexities of her own divorce, and the BBC’s synopsis promises “the most dramatic and heart-breaking series to date”. The catalyst to the breakdown of Hannah (Nicola Walker) and Nathan’s (Stephen Mangan) marriage, Christie (Barry Atsma), will also return for the final series.

The BBC teases a “shocking revelation that dramatically changes the stakes”, adding that “battle lines are redrawn”, and Hannah and Nathan’s “dream of achieving the 'good divorce' is left in tatters.”

As Radio Times reports, new additions to the show’s cast include Lara Pulver (Sherlock, True Blood, Spooks), who will take on the role of Kate, a leading child psychologist whose arrival adds a whole new layer of complexity to the plot.

Ahead of filming series 3, Walker aka Hannah Stern, said that she was excited to find out what show-writer Morgan had in store. "We are all looking forward to the journey Abi has planned for us. I don’t know if Hannah will cling to the wreckage or walk away, but I do know it’s going to be a fantastic ride," she said.

The first official trailer for The Split series 3 dropped on March 21, giving fans a first-look at the new season ahead of the show’s return next month.

The Split's second season was a huge hit for the BBC, averaging six million viewers per episode, and becoming BBC iPlayer's third most-watched drama of 2020, with more than 19 million streams.

Commenting on the forthcoming final run, show-creator Morgan gave an indication of what fans can expect from The Split's "bittersweet" conclusion. "It’s great to be back writing for the Defoe family, and to dive once more into to the complications of their lives, and those of their clients," she said. "Hannah faces the heartbreak of her own divorce, and the fight to save her family and her marriage. Siblings clash, past mistakes are exposed, and hearts are broken."

The Split series one and two are currently available on BBC iPlayer.

More like this
Everything To Know About The 'Daisy Jones & The Six' TV Series
By Maxine Harrison and Brad Witter
'The Last Of Us' Has Officially Been Renewed For Season 2
By Darshita Goyal
Helena Bonham Carter Doesn't Think 'The Crown' “Should Carry On"
By Sam Ramsden
Twitter Is Burning As Phoebe Dynevor Reveals Daphne’s 'Bridgerton' Exit
By Sophie McEvoy
Get The Very Best Of Bustle/UK
Sign up for Bustle UK's twice-weekly newsletter, featuring the latest must-watch TV, moving personal stories, and expert advice on the hottest viral buys.