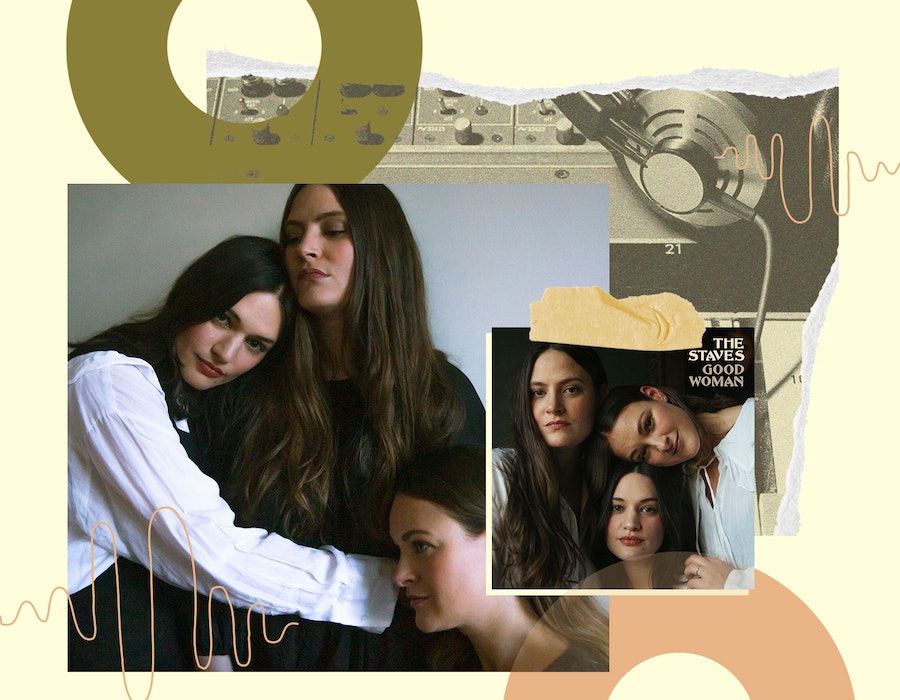 What makes a good woman? That's the question The Staves pose on their third studio album, aptly titled Good Woman. “Be caregiving, strong, fragile, amenable, quiet, and don’t make a fuss," answers Camilla Staveley-Taylor, one third of the UK-born trio, which also consists of her sisters Emily and Jessica. "Also have an opinion… but not too [many opinions]!” These maddening contradictions are at the core of The Staves’ new album, along with a daring new sound that flies in the face of the folk style they became known for on their Bon Iver-produced 2015 record If I Was.

Good Woman proved to be both a personal and professional triumph for the group. When they began writing it Emily and Jessica had just moved back to England, while Camilla remained behind in Minneapolis, Minnesota, where the three were based for years. Many of the songs started as voice memos exchanged between the sisters, connecting them across continents. “Sometimes you can figure out how someone is doing in a more real way when you listen to the song they have just written rather than chatting on the phone,” Jessica says.

The album was nearly done in 2018 when the siblings' lives changed suddenly. Their mother passed away unexpectedly; shortly thereafter, Emily found out she was pregnant. They took a year off to collect themselves and grieve. “We kind of came back [to recording] stronger and bolder and more fearless, with this feeling of ‘What’s the worst that can happen?’” Jessica says.

Now, The Staves are unafraid to reinvent themselves, experiment with new genres, and reject society's pressure to be a "good woman." “[You have to] block out all the noise and know you don't have to be perfect just because the world holds you to an incredibly high standard,” says Camilla. “You are enough.” Below, Jessica and Camilla muse on their emo phase, their strange sister idiosyncrasies, and the moment they decided to make the band official.

On Writing Through Grief & Across Continents

What was happening in your lives when you started writing Good Woman?

Jessica Staveley-Taylor: We were living in Minneapolis and then Emily and I moved back to London in the autumn of 2017, and that’s when it all started. Milly stayed in the U.S. for another year or so. We just had this shared experience of moving away together and being in America for quite a long time. We gathered up those experiences and went away and started to write about them.

This album was written with an ocean between you all. What was that experience like?

Jessica Staveley-Taylor: It was a nice way to keep in touch. We were always compiling sounds we thought were interesting: of other peoples' voices, background noises, traffic, city sounds, kids at a playground. Our baby sister was thousands of miles away. It was really hard. We missed you.

Camilla Staveley-Taylor: Aw! It felt really surreal and dreamlike. I kept thinking I was going to see you walking down my street. It almost felt like having a limb removed, not to sound too melodramatic. Sometimes it just feels like people can know me but until they’ve seen me with my sisters, I feel like they don't fully know me. The jokes, the weird idiosyncrasies you have together as [sisters], they make up a massive part of you.

You went through a lot while making this album. How were you able to get back into the studio after such a huge loss?

JST: We were going through this hard time and just got so much support. It became our armor. It makes me think of Harry Potter, how his mum's love protected him. That feeling is as old as all the fairy tales, those kinds of ideas that there is a sort of magic somehow in [the loss of a parent]. When it happens to you, it’s f*cking true. There is 100% shit we don't know about, I totally believe there are forces at work.

CST: Jess is a witch! It was nice that [for this album] we got to scamper around outside in the f*cking massive barn, on staircases, by fires, and sing rather than be in a weird sterile room with a mic and headphones.

On Looking Up To Hanson, Their Counting Crows Phase, & Becoming A Band

What's first song you put on when someone hands you the aux cord?

JST: I always put on “What a Fool Believes” by The Doobie Brothers. It’s a great one, everyone is always happy when it’s on.

CST: I would do either “Alone Too Long” by Hall & Oates or “Cloudbusting” by Kate Bush.

What music were you obsessed with growing up?

CST: Counting Crows. I really emo-ed out to them. Singing in an accent that wasn’t my own, getting all emotional. And it sounds quite wanky or untrue, but The Beatles were just such a presence in all our lives growing up, so much so that I didn’t really realize they were not a current band. I remember talking to the other kids and being like, “You’ve not heard of them? Really? They do this song and this song.”

JST: Our parents played a lot of really good music growing up and that did sink in, but I remember I was obsessed with Hanson. I would cry to every song. I wanted to be them. I wanted the three of us to be in a band and it was like, "They can do that, so we should do that."

If Hanson was the jumping off point, when did the sister-band idea start becoming real? Was there a moment you felt like real musicians?

CST: It was all really theoretical, a far-off dream. It wasn’t serious until I was about 19. We gigged around on and off when Emily would come back from university for summer, then it got to a point where Jess had finished university and it was the first time where all three of us were at a bit of a crossroads at the same time. It was only then that we had the conversation of like, "Are we actually going to try to do this?"

JST: Movies like Josie and the Pussycats came out and we were like, "Oh we could totally do that." Then we got older and the thought was put on ice for a bit. When I started playing guitar — and once we could play a song through and sing it — suddenly it felt like, well now we're ready to go on stage.

We sensed there was potential in what we were doing and we were very protective of it. We always wanted to do everything ourselves: write all the songs, play all the instruments. I think it just takes a long time to get good at that sh*t. It’s not just about being good at singing or playing an instrument but the whole package. Some people can do that really young but I think that’s quite rare, most of the time you spend a lot of time being sh*t. It took us a while.