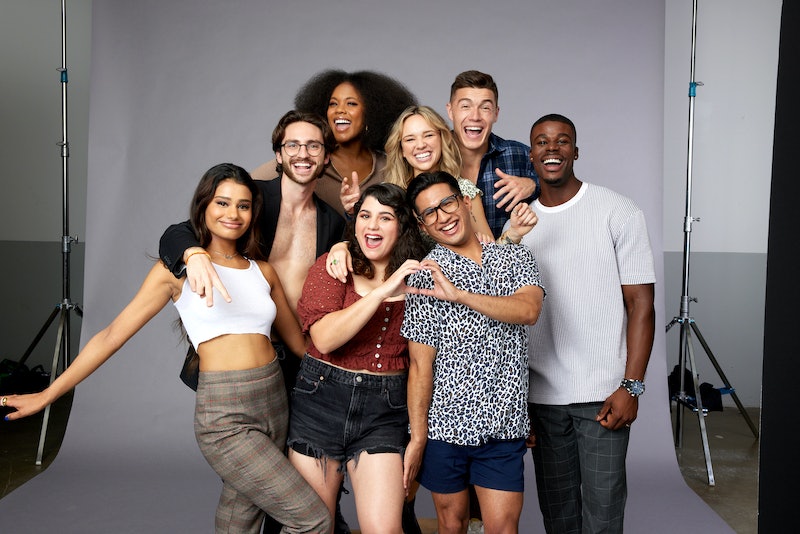 If you’re a fan of MTV’s The Real World or Netflix’s Terrace House, you may want to check out Twentysomethings: Austin. Premiering on Dec. 10, the new Netflix reality series follows a diverse group of young people who relocate to Austin, Texas to live together in the same house. (Well, technically two houses side-by-side, which are separated into men’s and women’s living quarters.) The reasons they’re moving all vary: Some are looking for love, while others want to get out of their parents’ houses and figure out their careers. Regardless, they’re all navigating a new chapter of life.

Bruce is a 23-year-old from Greenville, South Carolina. When lockdown hit, he was working in Atlanta. But after losing his job, he moved back home with his dad and started working for his insurance business. “I just don’t feel like insurance is my calling,” he explains in the show. “I heard Austin is a young, bustling town, and me being 23, that’s something that I want to be a part of.” He jokes that he may seem like a “meathead,” but he loves rom-coms like The Wedding Planner and How To Lose a Guy in 10 Days.

On Bruce’s Instagram, you can check out some of his South Carolina kayaking adventures.

Natalie is a 26-year-old from Miami, Florida. She decided to go on the show because she’s “never really had a chance to just move out and be on my own,” she explains, adding, “They say Austin is weird, and I love that because I’m weird too.”

Judging by Natalie’s Instagram, she’s shy about taking pictures of herself but loves to party with her friends. Natalie also notes that she’s single.

Kamari is a 23-year-old from Greensboro, North Carolina. He’s a model, and you can see plenty of his photoshoots on his Instagram page.

Raquel is a 25-year-old from Eatonville, Florida. When lockdown started, she had just graduated from college, so she moved back in with her parents. But she got tired of having a curfew and is excited to spread her wings in Austin. “I do consider myself a happy mushroom,” she says on the series. Like Natalie, Raquel is single, and she gets excited when she sees Kamari pull up to the house.

Raquel’s Instagram includes plenty of pictures of her time at Florida A&M University.

Abbey is a 26-year-old from Houston, Texas. “I just want to live a lot,” she says when she arrives at the house. She’s recently divorced, but jokes to Natalie and Raquel that she’s just “emotionally unavailable right now.” She got married really young — something she would absolutely not recommend.

It doesn’t look like Abbey has any pictures of her ex on Instagram, but she does have plenty with her bestie of seven years.

Keauno, aka Keke, is a 28-year-old from Fayetteville, Arkansas. “I’m coming to Austin because Austin is different. I’m able to be my authentic self,” he says when he arrives, explaining later that he’s eager to be able to explore his queer identity.

Keauno worked in housing for the University of Arkansas for five years, doing things like living in the dorms and supervising the RAs. But he was let go right before going to Austin because they don’t allow temporary leave. It will be interesting to see how Keauno deals with not being at the university anymore, as it was obviously a big part of his life. His Instagram is full of shenanigans with his former coworkers as well as pictures with his former students.

Isha is a 24-year-old from Irvine, California. She boasts that she’s a triple air sign — Gemini, Libra, and Aquarius — and as a result is “always in [her] head.” She attended UC Berkeley, where she studied economics. “I do think I’m intelligent, but every now and then I say things that can come across as a little ditzy,” she explains. (For example, she jokes that she gets Miami and Maine confused because they both start with “M.”) She also wants to see what the dating scene is like in Austin because she’s tired of the influencer and start-up types in California.

Isha’s Instagram is full of her California adventures, as well as pictures with her family.

Michael is a 23-year-old from Los Angeles, California. He moved to Austin to pursue stand-up comedy and makes a few jokes about his family and being Jewish when he arrives. He doesn’t use social media as frequently as the other cast members, but you can check out some of his comedy on Instagram.

More like this
Move Over, 'Sunset'! The Drama-Filled Trailer For 'Selling The OC' Is Here
By Nola Ojomu
Everything To Know About A Potential 'Love On The Spectrum U.S.' Season 2
By Gretchen Smail
There's One Big Reason Bru & Alyssa Aren't Dating After 'The Circle'
By Gretchen Smail
Everything We Know About Chèrie & Jessey’s Abrupt Exit From Bling Empire
By Alyssa Lapid
Get Even More From Bustle — Sign Up For The Newsletter