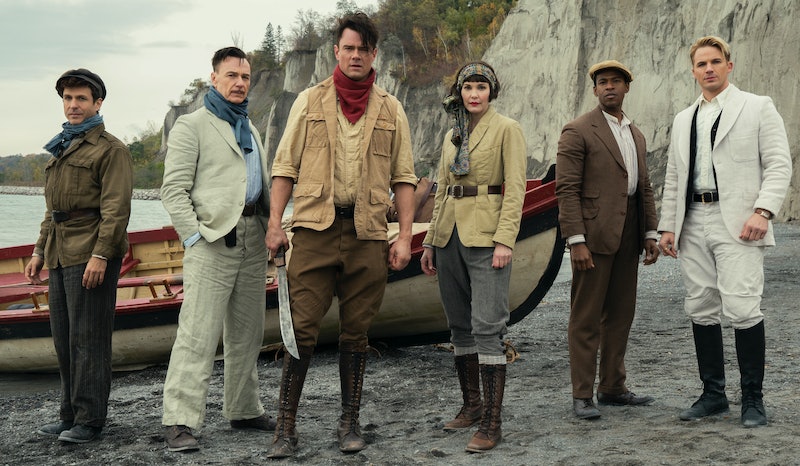 Steve Wilkie/Netflix
By Gretchen Smail
May 6, 2021

From Kingsman creator Mark Millar, Netflix’s Jupiter’s Legacy examines what it means to be a superhero in an increasingly fraught world. Jumping between two different time periods, the show mixes the storylines of Millar’s original 2011 Jupiter’s Legacy series with the 2015 prequel comics, Jupiter’s Circle. It explores how two generations of superheroes have diverged ideologically since the founding of The Union, a team of super-powered humans that riffs off well-known team-ups like the Avengers or the Justice League.

In a blog post, Millar explained that he was inspired to write Jupiter’s Legacy after having a second child and reflecting on how the idealized Golden Age comic book heroes would act as parents. “I thought, ‘What would it be like if somebody as cool as Superman married somebody as amazing as Wonder Woman and they had kids?’,” Miller wrote. “That's a fascinating dynamic, and it would be especially difficult for the children to live up to their parents’ expectations and legacies.”

Though only briefly mentioned in the Jupiter’s Legacy comic, The Union’s formation is fully explored in the Netflix adaptation. The show initially kicks off in the late 1920s with Josh Duhamel’s Sheldon Sampson, a steel company tycoon reeling from the Great Depression. Desperate to figure out how to fix himself — and maybe America too — Sheldon convinces his college friends to go on a journey with him to a mysterious island. The island ends up gifting them all with varying powers and decelerated aging, and The Union is formed.

This is pretty true to the source material. In the comics, The Union is established after Sheldon sees visions of an island in 1932. “I could see it in my dreams, like Liberty’s torch, promising salvation for a country,” Sheldon narrates in the comic. “Our finest hour was yet to come, the island assured me. Great gifts lay beneath its shores and my task was to bring them to a nation needing heroes.”

The group arrives with the help of a crew, and discover the island is actually an alien machine. (In a later chapter, it’s suggested that the aliens were there to purposely interfere with human evolution, likely to make a stronger race that could survive leaving Earth altogether.) When they return to America, they’re hailed as heroes who “helped America through the Great Depression, World War II, conflicts, scandals, and anything that was thrown at us.” Sheldon notes that they never cared about money or politics, and their noble actions (like never killing anyone) and “infinite idealism inspired the best in everyone.”

The team was originally six members who operated out of the Chamber of Secrets, a massive hall with a central conference table where they would discuss pressing issues. There was team leader Sheldon, who became the Superman-like hero Utopian with his powers of super strength, speed, flight, and near invulnerability. His wife Grace (Leslie Bibb) went from being a lawyer to Lady Liberty, who has superhuman speed and strength. Sheldon’s brother Walter (Ben Daniels) became Brainwave, who has all of Utopian’s powers plus a devastating telekinetic ability to separate someone’s mind from their body. Sheldon’s best friend, playboy millionaire George (Matt Lanter) became Skyfox, a clever engineer with super strength. Neonatal surgeon Richard (David Julian Hirsh) became Blue Bolt, who can teleport with a power rod. And Fitz (Mike Wade) became The Flare, who has super speed and can project yellow energy blasts.

While The Union loomed large when it was first established, 90 years later the organization has been largely deemed archaic by the younger generation of heroes. At some point in time Skyfox betrayed the other members, and present day Brainwave reprimands Utopian for being out of touch with 2013 morals. While Utopian insists that The Union has to “trust the system works” and follow the direction of America’s elected officials, Brainwave believes superheroes should instead be using their powers to compel President Obama to change how he runs the country. Most of the other young superheroes agree they should be intervening more in political and economic affairs, and we find out they really, really hate how idealistic and naïve Utopian can be in face of real world issues like poverty, climate change, and wars. They also think Utopian’s code of no killing is ridiculous and lets bad guys off the hook.

While the Netflix adaptation takes some liberties with the story, this generational conflict is still explored through characters like Utopia’s kids, Brandon and Chloe; Skyfox’s son Hutch; Brainwave’s daughter Raikou; and Flare’s daughter Petra. Jupiter’s Legacy ultimately explores the limits of “infinite idealism” and what that means to be a pacifist in an increasingly grim world.

“We have different points of view,” showrunner Sang Kyu Kim explained to Syfywire. “What we wanted to do was not pick sides, present the characters for who they are and what they believe in, but also give them strong arguments as to why they believe it.”