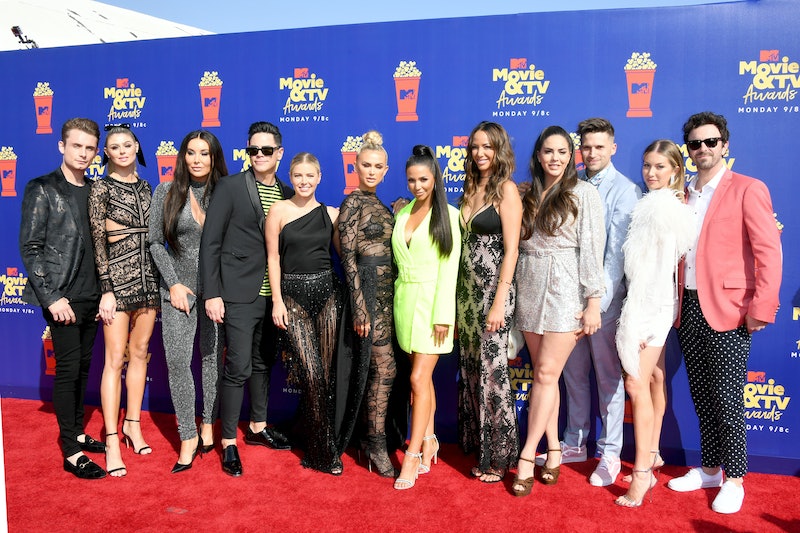 When Vanderpump Rules returns for Season 9 on Sept. 28, it will be missing several faces familiar to fans. After previous racist actions surfaced about a number of cast members, Kristen Doute, Stassi Schroder, Beau Clark, Max Boyens, Brett Caprioni, Jax Taylor, and Brittany Cartwright were all fired from or otherwise exited the reality series.

“When you go from having, like, 20 something castmates to basically 12, it’s an adjustment, but I think it’s good because we have the time, we can go a little bit deeper with each person versus having to kind of skate on the surface. I mean, at one point last season, they were splitting the screen and stuff,” Sandoval recently told Us Weekly. “Sometimes things have a tendency to slip through the cracks when you have so many castmates that are actually really important aspects of our lives, but when you have a little bit less, we’re more involved, it’s deeper. And I actually really liked that change.”

Here’s what all of the departed cast members are doing now.

Bravo fired longtime Vanderpump stars Stassi and Kristen last June, one week after former cast member Faith Stowers, who is Black, revealed that the women had once reported her to police for a crime she did not commit. Soon afterward, racist comments Stassi made during a 2017 episode of her podcast also resurfaced. “It is important that I continue to take accountability for what I have said and done while pushing myself to do better,” Stassi wrote on Instagram. “I have grown significantly from the person I was then, and I am still filled with remorse and regret for the hurt I caused. I am grateful for the people in my life that continue to check me and push me to evolve into a more educated person.”

In January, the Next Level Basic author and her fiancé Beau Clark welcomed a daugher, Hartford Charlie Rose Clark. The couple now hosts a family-centered Patreon podcast called The Good The Bad The Baby, where they discuss everything from their birth story to how having a baby changed their relationship. “Becoming a parent is literally the best, most f*cking overwhelming magical chaotic incredible thing that’s ever happened to me and I am so excited to start sharing the good, the bad, the messy, the little moments, the wtf?! and everything in between,” Stassi captioned a March Instagram post, in part, when announcing the new project.

What Kristen Doute Is Doing Now

The same month she was fired, Kristen released her book, He's Making You Crazy: How to Get the Guy, Get Even, and Get Over It, in which she unpacks the ups and downs of her dating history while aiming to help motivate readers to get out of their own unhealthy relationships. She also continues to run her James Mae fashion brand, and is still dating Alex Menache.

Fans had been calling for Jax to be fired since he also falsely accused Faith of criminal activity. It wasn’t until December, however, that he and his wife announced they would not be returning to Vanderpump Rules. (Bravo confirmed the couple’s exit to Variety shortly afterward, but offered no further explanation.) At the time, Brittany was pregnant with their first child, and Jax described his excitement about being able to focus on their growing family, hinting at other unspecified future endeavors. He added that he felt it was "time to move on" and that "being a parent is way more important" to him than the show. He and Brittany welcomed their son Cruz Michael Cauchi in April, and recently vacationed in Miami with Lala and her fiancé Randall Emmett after joining them as special guests on the Miami leg of their tour. The couple also appeared on an episode of NBC’s Open House.

What Max Boyens Is Doing Now

Bravo and Vanderpump Rules production company Evolution Media confirmed in a joint statement last June they’d fired Season 8 newcomers Max and Brett, whose past racist tweets resurfaced in 2020. A year later, Max’s rep announced that he had resigned from TomTom, Schwartz and Sandoval’s bar with Lisa Vanderpump, over alleged “issues related to health insurance.” He is now the CFO and a mixologist for Una Mas Cocktails, a beverage company that recently collaborated on a line of cannabis-infused drink powders.

What Brett Caprioni Is Doing Now

In a June 2020 statement to Us Weekly, Brett said that while he was “disappointed to no longer be part of the cast,” he respected Bravo’s decision to let him go. “I continue to be truly sorry for the insensitive comments I made in the past and have worked within my community to repair the damage I’ve caused,” the former SURver added. “I have learned a lot and grown from the experience but understand that it’s not enough. I will continue to do more regardless of my affiliation with VPR because it’s the right thing to do.” He has continued to post on his Brett Cap YouTube channel.