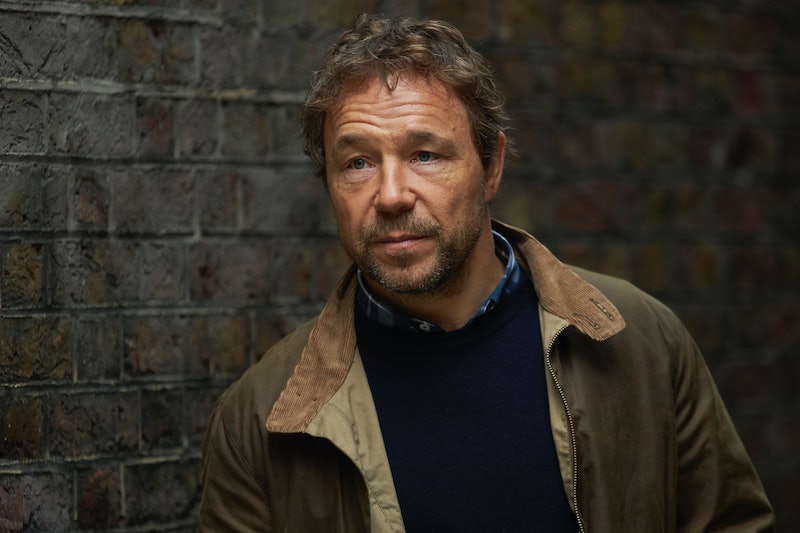 ITV’s latest drama The Walk-In sees actor Stephen Graham take on a complex lead role. The programme tells the story of how a neo-Nazi’s plan to kill an MP was thwarted by a former member of the far-right organisation. Written by Little Boy Blue’s Jeff Pope, the five-part series is described as “a thought-provoking, conscience-stirring drama.” But is The Walk-In based on a true story?

Graham’s character Matthew Collins is, in fact, a real activist and author. He was once the South London organiser for the National Front in the 1970s, and was also a volunteer for the British National Party and a member of the neo-Nazi terrorist organisation Combat 18. After witnessing an atrocious act against elderly protestors of the BNP in 1989, Collins left the group. He anonymously contacted Searchlight, an anti-fascist magazine and organisation, becoming an informant.

Under a pseudonym, he would provide names, demonstration dates, and other information to help bring down the organisations he once worked. The Guardian described Collins as “instrumental” in exposing Combat 18, with his work as an informant leading to the arrest of three men.

Collins subsequently went into hiding, emerging a decade later as an advocate and activist for exposing the far right. He now works as the head of intelligence for “HOPE not hate,” an advocacy group campaigning against racism and fascism.

In 2017, a senior spokesperson for the neo-Nazi group National Action planned to kill Labour MP Rosie Cooper and police officer DC Victoria Henderson. But due to the actions of former member-turned-informant Robbie Mullen, the plan was thwarted days before it was set to take place.

Mullins initially joined the group in 2015, “impressed by what he had seen of it in the media, and in search of friends.” In trying to leave NA, he sought the help of the advocacy group HOPE not hate, of which Collins was the head of intelligence. By this time, NA had been marked as a terrorist organisation by the government following the death of Labour MP Jo Cox. But in using Mullins as an informant, HOPE not hate kept tabs on the group, leading them to discover a plan concocted by its spokesperson, Jack Renshaw.

As Collins writes, Renshaw discovered he was to be charged “for child exploitation” and grooming offences. Renshaw decided that he’d rather be known for murdering an MP if he were to be convicted. He planned to murder Cooper first, then police officer Henderson for her role in the grooming investigation. Renshaw planned to wear a fake explosive belt during his crime.

With this information from Mullins, Collins began the chain of calls that would lead to Cooper being made aware of the threat to her life. She, in turn, contacted the local police and the then-Deputy Speaker of the House, Lindsay Hoyle. Renshaw was soon arrested and convicted for the plot. He pled guilty following a trial at the Old Bailey in June 2018.

Cooper, however, is less than impressed with her story being used for the ITV series. “I’m appalled at ITV’s recent treatment of the threats to MPs. I’ve been used as a marketing tool by Hope Not Hate and ITV,” the MP told the House of Commons on Nov. 2, adding that she’s received more threats “all piggybacking on the original threat,” and that one was currently with “the Director of Public Prosecutions … how many more will come from this st*pid, st*pid, st*pid series?” Cooper has requested that “all monies and profits” from the series should be given to the Jo Cox Foundation.

In response, ITV said in a statement that they “always conduct the making of these series carefully and responsibly.” A spokesperson for Hope Not Hate added that they “sympathise with Rosie Cooper” but were “disappointed” to hear what she had to say. “We cannot change what happened to Rosie Cooper but we can continue to work to tackle far-right extremism,” noting that they’ve had “several current and former members of the organised far right” reach out to them following The Walk-In’s broadcast.

More like this
Our First Look At 'Vardy V Rooney: A Courtroom Drama' Doesn’t Disappoint
By Bustle UK
Lib & Will’s Romance In 'The Wonder' Is Very Different From The Book
By Sam Ramsden
Matt Hancock's “Cringe” Jungle Karaoke Left Twitter Reeling
By Sam Ramsden
Nicola Coughlan Just Shared A Major Update About 'Bridgerton' S3
By Sam Ramsden
Get The Very Best Of Bustle/UK

This article was originally published on Oct. 4, 2022