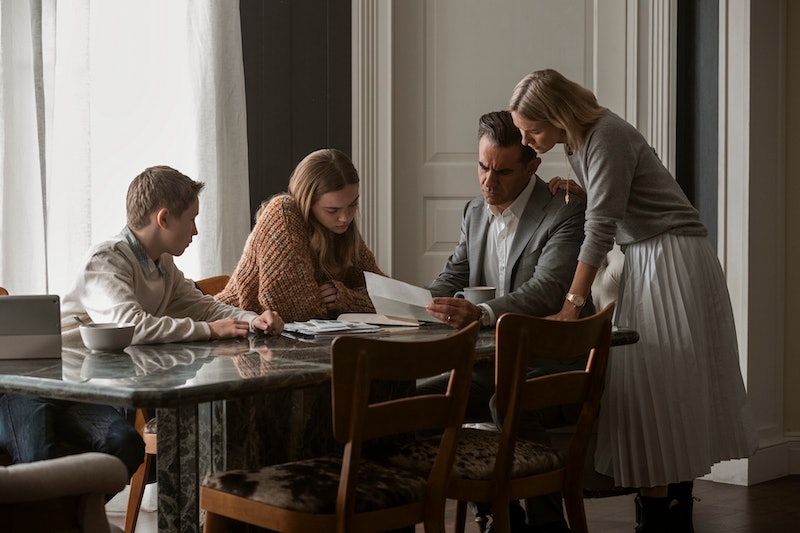 Netflix’s The Watcher is based on the true story of the Broaddus family, who purchased 657 Boulevard in Westfield, New Jersey in 2014. Right away, they began receiving mysterious letters, in which an anonymous sender named The Watcher would make threatening observations about the home and its new, would-be residents. Several times, The Watcher even referred to the family’s three children as “young blood.”

As New York Magazine’s The Cut reported in 2018, the family never actually moved in and ultimately sold the house in 2019 after pursuing several fruitless leads about The Watcher’s identity. In a follow-up piece published this October, The Cut reported that 657 Boulevard sold for $959,000, despite the family buying it for $1.35 million five years earlier. Derek Broaddus told the outlet that the losses were greater than the price Netflix paid for the story rights. Bustle reached out to Derek, and he declined to comment.

According to The Cut, the family didn’t really want to be involved in the project but agreed to sell their story for a “modicum of control” over the dramatization. That small piece of power led to some of the changes between Netflix’s The Watcher and the real-life mystery it’s based on.

For example, Naomi Watts and Bobby Cannavale play a couple by the name of Nora and Dean Brannock, respectively, as opposed to Maria and Derek Broaddus. Additionally, the on-screen version of the family has two kids, instead of three. These small tweaks, Derek told The Cut, were their requests to the show, leading to a finished product that has a semblance of the real Watcher story but isn’t too familiar for the family that went through it.

657 Boulevard is still standing today — in fact, it now has new residents who have not reported receiving any letters from The Watcher. However, for the purposes of the Netflix retelling, Derek reportedly told The Cut “that they wouldn’t mind it if the fictional house burned to the ground.”

Despite their requests being honored (minus the fire), the Broaddus family won’t actually be tuning into The Watcher to see how their fictional counterparts fare. According to The Cut, the trailer for the show “was stressful enough” for Derek.

The magazine’s 2022 update adds that the family still lives in the area, but they seem to prioritize their privacy more than ever. You won’t find on-camera interviews with the couple — or many interviews at all, except at New York Magazine, which first chronicled their experience with the Watcher mystery four years ago.

More like this
The Mysterious Gunther Corporation From 'Gunther’s Millions' Has Dissolved
By Brad Witter
Here’s Everything Coming To & Leaving Netflix In February
By Jake Viswanath
The 'Freeridge' Cast Shared Their Hopes For A Potential Season 2
By Grace Wehniainen
You Might Want To Rewatch This Key 'On My Block' Scene To Understand 'Freeridge'
By Grace Wehniainen
Get Even More From Bustle — Sign Up For The Newsletter
From hair trends to relationship advice, our daily newsletter has everything you need to sound like a person who’s on TikTok, even if you aren’t.