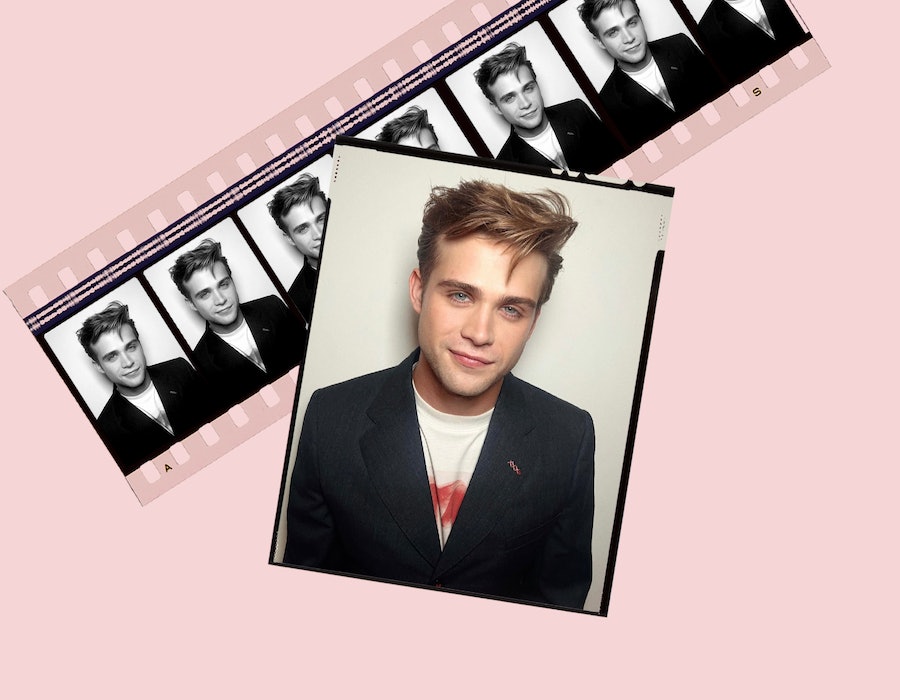 Leo Woodall was in quarantine in a Portugal hotel room in December 2021 when his dad told him to watch a show called The White Lotus. “He said it was amazing,” Woodall tells Bustle. “But I was unaware that there was an audition for Season 2 already in my inbox from like a week before.” The London-based actor, 26, thought that had to mean something, so he sent an audition tape to White Lotus creator Mike White’s team.

A few weeks and several Zoom technical difficulties later, Woodall landed the role of Jack, a young man vacationing in Italy with a group of gay men led by his uncle and English millionaire Quentin (Tom Hollander). Jack whisks Portia (Haley Lu Richardson) away from her burgeoning romance with Albie (Adam DiMarco) as Quentin takes in Portia’s lonely boss, Tanya (Jennifer Coolidge). But it’s Jack’s sex scene with a different character in Episode 5 that left viewers reeling: after a glamorous night out at the opera, Tanya finds Jack having sex with his “uncle” Quentin.

“I just thought it was kind of shocking but so cool. And so White Lotus,” Woodall says of the twist, explaining that it mirrors the Season 1 sex scene between Armand (Murray Bartlett) and Dillon (Lukas Gage). “I thought it was almost an honor to have our own moment in this season.”

Woodall says White explained his thinking behind the scene but gave the actors room to explore. “He just allowed us to play with his script and make things up if we wanted to,” Woodall says. “It was up to us to figure it out on our own and allow the audience to kind of figure it out as well.”

Woodall already has his next move figured out. The actor will star as Dexter Mayhew in Netflix’s One Day, a romantic drama based on David Nicholls’ bestselling novel, which chronicles Dexter’s on-and-off relationship with Emma Morley (Ambika Mod) over 20 years. Woodall watched the Anne Hathaway-starring 2011 film adaptation to prepare for the audition but explains the 14-episode series will bring the full book to screen. “You'll get a lot of things from the book that were missed out on [in the movie].”

Until then, Woodall isn’t too concerned about his rising star status; he’s just excited to see his friends and family react to his work in The White Lotus. “I'm trying not to think about the bigger thing of people who I don't know knowing or even just seeing my face on screen.”

Below, learn more about Woodall in his Bustle Booth questionnaire.

Not a huge coffee drinker. At work, I might have a black coffee. Or a caramel latte with oat milk if I’m hungover.

I don’t have any… Should I?

I recently watched Where the Crawdads Sing, and I didn’t expect it to, but it obliterated me!

I’ve been working with a brilliant director named John Hardwick, and he’s been settling for no less than the rawest truth between action and cut. It’s snapped me out of moments where I may get complacent.

That I can do the floss like a pro. I can do it at lightning speed.

More like this
Keyla Monterroso Mejia Is Finally The Star Of The Show
By Gabrielle Bondi
Everything To Know About 'And Just Like That...' Season 2
By Jack Irvin and Grace Wehniainen
Here’s What Happens To Bill & Frank In 'The Last Of Us' Video Game
By Brad Witter
Ashton Kutcher Wants Danny Masterson “To Be Found Innocent” In Rape Retrial
By Jake Viswanath
Get Even More From Bustle — Sign Up For The Newsletter
From hair trends to relationship advice, our daily newsletter has everything you need to sound like a person who’s on TikTok, even if you aren’t.