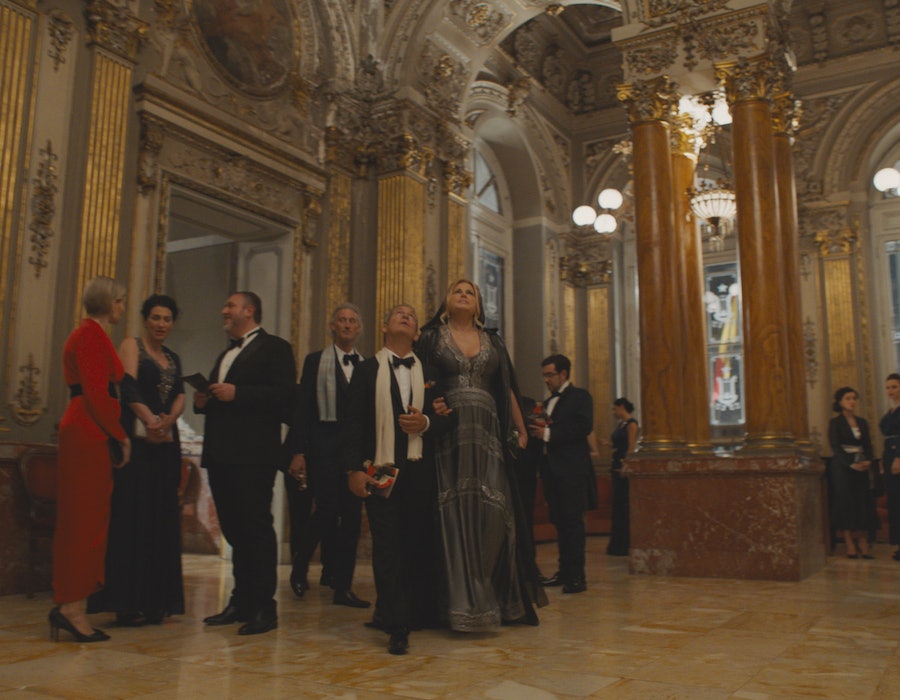 On the day The White Lotus announced its Season 3 renewal, the show’s costume designer, Alex Bovaird, Zooms in from Iceland. Bovaird is there working on True Detective Season 4, and, no, she’s not necessarily pulling for the chilly volcanic island to be White Lotus creator Mike White’s next playground. “I don’t think Mike wants to go to cold places,” she tells Bustle. “After Season 1, there was talk about some sort of alpine situation, which would have been fun for me with all the après-ski [fashion]... If you have the choice, you might as well write it somewhere that’s comfortable to shoot in.”

For this season, set in the balmy cliffs of Taormina, Sicily, Bovaird pulled from an assembly of Italian designers to create the lavish resort looks. There’s Valentino, Versace, Prada, Etro, Gucci, and Alberta Ferretti, whose runway collection led to one of Tanya’s most memorable Season 2 moments yet: her Pretty Woman-esque night at the opera in Episode 5.

“We asked if they could make one especially for Jennifer [Coolidge], so it was that dress from the beginning,” Bovaird explains. “And then it has that cape, which just added a little extra, funny Coolidge-ness to it. Jennifer was really adamant that that was the opera dress.”

While Coolidge’s gown may be the show-stopper of The White Lotus fashion so far, everyone in the ensemble gets a “mojo” moment, Bovaird says. Below, the Emmy-nominated costume designer talks about Albie and Portia’s relationship, fan theories, and an iconic (if accidental) Princess Diaries throwback.

The White Lotus Season 2 is really focusing on gender and relationships. How does that inform your approach to the costumes?

I did think about that with the costumes and did try and keep everyone sexy. There’s a lot of red and pink, which are the colorful tropes of love and romance and sex. And there are little symbols. Lucia wears a charm necklace, and it has Aphrodite, a love heart, and a pentagram on it.

When you see her in bed with Albie, he has these pristine white socks on.

It just seemed very Albie to keep him as a less tantalizing choice — with all due respect. Because I’ve seen a lot of articles on how hot Albie is, so that’s great, but we tried to make him tamer and less of a bad boy.

He’s definitely been framed as the “nice guy,” but fans are worried that’s not the case. Is his character evolution reflected in his style? He seems to be dressing more like his dad and grandpa.

That was a deliberate choice to give him a little more Italiano flair. Instead of wearing his polo shirt to dinner, or his rugby shirt, or his Abercrombie, he’s got a couple of silk shirts. That was a lean-in to, like, “Oh, well, is he the gigolo now?” But without going too crazy, because they’re only on vacation for a week. But he feels empowered, and there’s some game-playing that goes on with Portia and Albie. She’s trying a lot of different things at once, and it’s not perfect, so she’s a bit zany. But when she’s with Jack, she’s trying harder, and she wears sexier things.

Someone pointed out online that Portia’s wearing a tank top that was in The Princess Diaries. Was that intentional?

I’ve seen that! That was accidental. It’s actually a dress that we took apart, and we made a tank top. I loved all the faces on it. It looks like the masks and heads that the show keeps cutting to. There are quite a few costumes that have eyes on them. And Mike White likes to do slightly surreal things, so it was an opportunity to go for it.

People are wondering about those dead bodies. Do you work with Mike White to plant clues or Easter eggs in the costumes?

I actually go out of my way not to throw anything in. It’s so fun not to know what’s going to happen. And Mike White hasn’t asked me to, either. Although, I’ve seen stuff online because it’s fun to read about. I saw an article, “Is orange signifying who’s going to die?” And it was pictures of people wearing orange. And I’m like, no, orange is just a very popular color in the stores right now!

More like this
Everything To Know About 'And Just Like That...' Season 2
By Jack Irvin and Grace Wehniainen
Here’s What Happens To Bill & Frank In 'The Last Of Us' Video Game
By Brad Witter
The 'Gossip Girl' Reboot Creator Is “Looking For A New Home” To Air A Potential Season 3
By Brad Witter
'The Last Of Us' Episode 4 Put Twitter Into An Emotional Spiral
By Alyssa Lapid
Get Even More From Bustle — Sign Up For The Newsletter
From hair trends to relationship advice, our daily newsletter has everything you need to sound like a person who’s on TikTok, even if you aren’t.