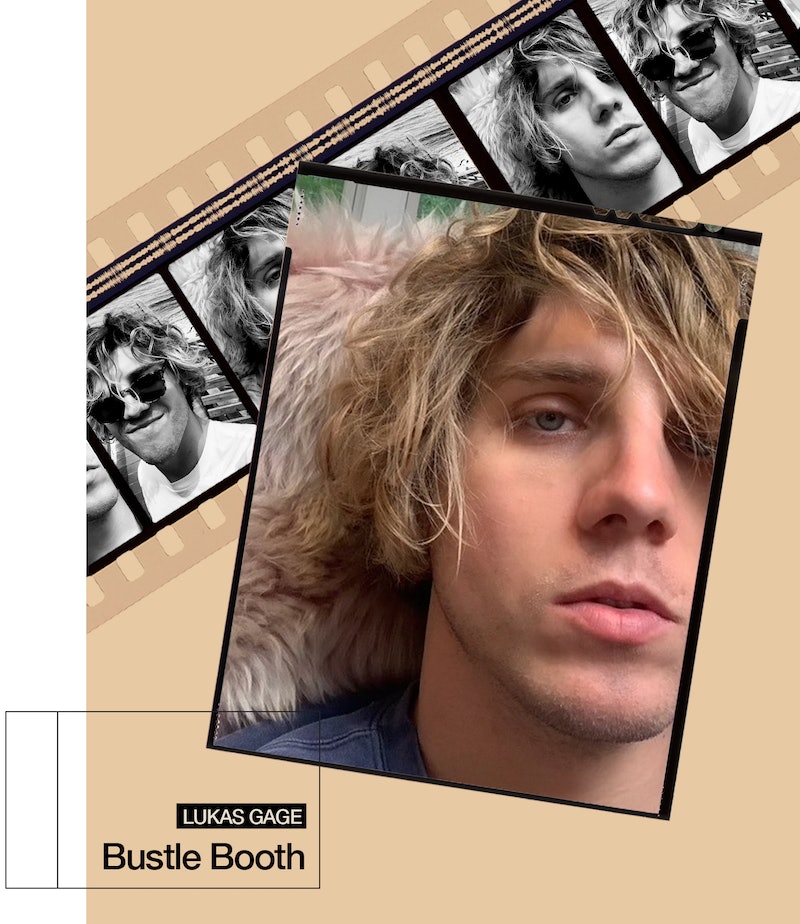 When Lukas Gage learned that he had a comedic, ketamine-fueled sex scene in HBO’s The White Lotus, he opted to put his own spin on it. Though the script already called for sex between Gage’s Dillon and his boss Armond (Murray Bartlett), Gage wanted to up the ante. “Me and Murray actually came up with idea of the ass eating because we've seen sex so many times, but how many times have we seen someone getting their salad tossed?” Gage tells Bustle. (“Watch my ass on @thewhitelotus tonight,” Gage teased on Instagram ahead of the episode’s premiere.)

Upping the ante is The White Lotus’ MO. The show is hardly the first — let alone the first on HBO — to satirize the privilege of its characters. But the claustrophobic atmosphere of the self-contained series pushes the familiar trope of rich people behaving badly to an inevitable breaking point. As each guest’s stay in the eponymous hotel progresses, the stakes (both comedic and dramatic) are heightened to a dizzying degree. Gage doesn’t just get his ass eaten by his superior; a petulant hotel guest walks in on them doing the deed. A fight doesn’t just break out at the resort; someone quite literally dies.

Behind the scenes, the filming experience was equally heightened. Because the show was shot over the pandemic, the actors were forced to take a meta approach to their roles, living together in first-class isolation at the Four Seasons in Maui, whose property serves as the backdrop for the series. While the 26-year-old says residing in paradise with comedic legends like Molly Shannon and Jennifer Coolidge was more laid back than you might expect, it wasn’t without its own hijinks. One night, Gage knocked over an entire wine bottle in the hotel lobby, ruining a couch and a rug. (“Jennifer Coolidge came to my rescue and literally took care of it for me. I think that she paid the cleaning crew and took care of the bill for me. I owe her my life. She's just an angel from above,” he says.)

Then there was the particularly impactful dinner he had with Shannon. “We were talking about our worst audition stories and she was telling me all these amazing stories from back in the day before SNL. Then I was like, ‘I have a really good one, and it's on video,’” he says of the time a chatty director forgot to turn his mic off during his Zoom audition. “I showed it to her, and she was like, ‘That is the funniest thing I've ever seen. You have to post it.’”

Gage went for it, and the reception was far greater than the funny, relatable moment of digital levity that he and Shannon expected. In the days that followed, Gage received messages of support from Judd Apatow, January Jones, Lena Dunham, and more. “I did not expect it to blow up the way that it did. I just thought it would be something that people could connect to and think was funny,” he says.

These days, that ill-fated audition couldn’t be further from Gage’s mind. Outside of The White Lotus, he’s sold his first two screenplays, with the first filming in New York this summer. “It's a crazy, out-there dark comedy about a deeply repressed gay man who invites an uninhibited young man to give him a happy ending,” he says. “Then they have a crazy, wild night, and it all takes place mostly in one night.” As for whether or not anyone’s salad will get tossed this time around — you’ll just have to wait and see.

Sedona, AZ, Guadalajara, Mexico (looking into timeshares), Wailea. I love NY and LA, but I think cities are really wearing me down. I wanna be hot and barefoot

Salad Fingers, but that is more Claymation/stop motion

That people stay the same, but also are always changing

He aged so gracefully

More like this
'The White Lotus' Season 2 Finally Has A Release Date
By Bustle Editors
On 'The Handmaid’s Tale,' Christine Ko Fights Back
By Gretchen Smail
Rhaenyra's Sons May Not Last Much Longer On 'House Of The Dragon'
By Grace Wehniainen
Laenor’s Fate On House of the Dragon Differs from The Book In One Crucial Way
By Kadin Burnett
Get Even More From Bustle — Sign Up For The Newsletter