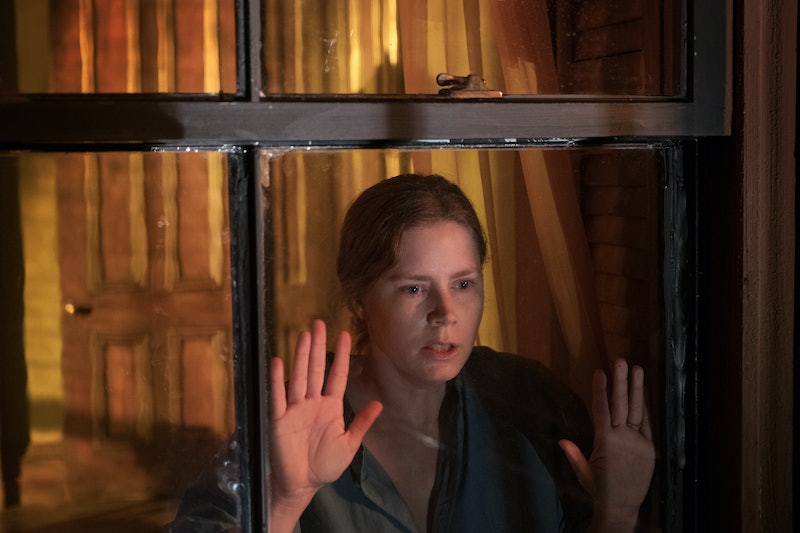 After a delay of almost two years, The Woman in the Window is finally making its public debut. Filmed in 2018, the Amy Adams thriller was originally slated to premiere in theaters in Oct. 2019. That date then got pushed to 2020, and was later postponed again due to the coronavirus pandemic. Now, the film is skipping cinemas in favor of a Netflix release, and it’s one of the biggest premieres to hit the streaming service this month. It tells the story of an agoraphobic woman (Adams) who thinks she witnesses the stabbing of her close friend next door, only to then become confused as to whether she ever met the woman at all. It plays like a true crime story but it’s also full of fantastical twists and turns that are pretty out there. So, is The Woman in the Window based at all on a true story? Perhaps a book?

If you think The Woman in the Window feels a little too wild to be based on a true story, you’re right. The film is adapted from the New York Times bestselling novel of the same name by A. J. Finn, the nom de plume of writer Daniel Mallory. Mallory published the book, his debut novel, in January 2018 (the film rights had been purchased pre-publication in 2016, hence the quick production turnaround), and he has yet to publish a second. And part of the reason why may be that the author’s real life is nearly as twist-filled and mysterious as his novel.

On Feb. 4, 2019, The New Yorker published a robust exposé on Mallory by Ian Parker, which essentially painted the author as a pathological liar. Parker alleged that Mallory had fabricated much of his life story for personal gain, saying that his mother had died of cancer, that his brother had died by suicide, and that he himself had had cancer — none of which was true. Parker also alleged that Mallory had embellished or lied about his education and his professional accomplishments, and he even implied (strongly) that the author lifted the plot of The Woman in the Window from the 1995 Sigourney Weaver thriller Copycat. In reply, Mallory issued a statement to The New Yorker through a PR firm, in which he attributed his mistruths to his own mental illness and offered an apology for his deceptions.

The Woman in the Window tells a wild story, there’s no question about that. But it may not be as wild as the life of the author who wrote it — so it’s hardly surprising that a TV show about Mallory is already in the works, starring Jake Gyllenhaal as the controversial writer. Janicza Bravo, who wrote and directed the upcoming Zola, is behind the forthcoming series, per Deadline.

More like this
Pamela Anderson Is Still A Hopeless Romantic
By Ilana Kaplan
Here’s Everything Coming To & Leaving Netflix In February
By Jake Viswanath
Netflix Shut Down 'Bridgerton' S3 Rumours About A “Very Dark” Storyline
By Bustle
Here's How Netflix Should Adapt Prince Harry's Memoir Into A Movie
By Ginny Hogan
Get Even More From Bustle — Sign Up For The Newsletter
From hair trends to relationship advice, our daily newsletter has everything you need to sound like a person who’s on TikTok, even if you aren’t.