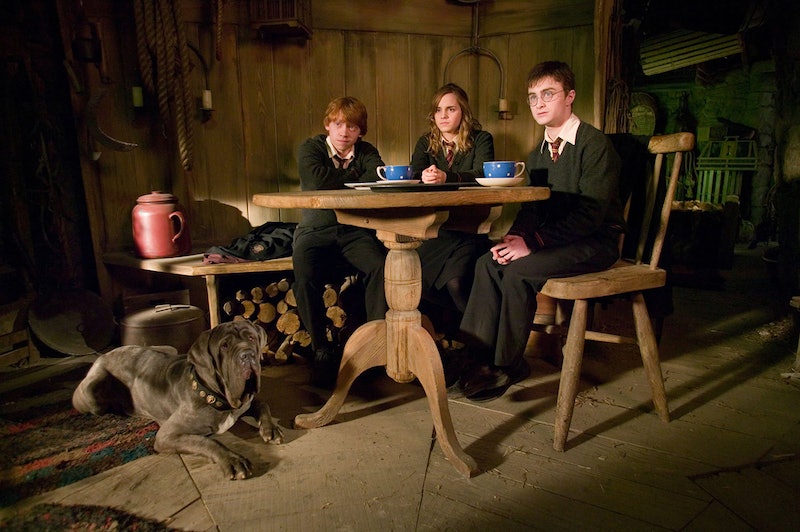 Like most primary school kids in the early noughties, I was wizard-obsessed growing up. When I wasn’t dressing up as The Boy Who Lived for World Book Day — a big drag king move from me, tbh — you’d find me immersed in the latest Harry Potter book the same day it came out or waving around my light-up Toys ‘R’ Us wand and dreaming of the day my Hogwarts letter would land with a magical thud on the doormat. As it turned out, I was destined to be a muggle, and my invite to the wizarding world never arrived. Though I devoured the early films, by the time the fifth film Order of the Phoenix came out in 2007, I was too busy trying my first sips of lukewarm Strongbow and listening to the Klaxons to bother watching it, though I’ve caught snippets of everything that came after The Goblet of Fire over my flatmates’ shoulders since then.

So, when I found myself stuck at home waiting on the results of a PCR test (ah, how times have changed since the films first debuted twenty years ago) with quite literally nothing else to fill my sprawingly empty days — and with the HBO reunion special arriving soon — I decided it was time to pick up where I left off. These were my main takeaways from the fifth instalment.

Dolores Umbridge is the best super-villain yet

Lined with carefully displayed porcelain plates, each one bearing an animated, meowing kitten, Umbridge’s office gives her the distinct energy of a cat lady crossed with a raging royalist. Her smart pink twinsets might be serving Legally Blonde meets the Queen’s stylist, but make no mistake, with her authoritarian rule and love of torture and manipulation, she’s one of Harry Potter’s most terrifying super-villains.

As well as banning music, student organisations, and the Weasley twins’ range of prank products, Umbridge insists on “proper dress and decorum” and decrees that “boys and girls are not permitted within eight inches of each other”. She’s like every power-hungry teacher or nasty interfering neighbour you’ve ever encountered and yet somehow four million times worse.

I’ve got a confession to make: I always found Harry Potter to be incredibly irritating in the first four films — from the moment he buys the entire trolley of sweets on the Hogwarts Express, leaving not a single tasty morsel for anybody else. Stroppy and self-centred, he makes Hermione do his homework, is consistently a bit of a dickhead to Ron, and lest we forget when he takes poor Parvati Patil to the Yule Ball and spends most of it moping around because he actually fancies Cho.

Though he makes a series of quite stupid calls in The Order of the Phoenix, however (we’ll get onto those in just a second), I actually warmed to him this time around. It’s partly because he stops being a self-absorbed do-gooder for once; a full five films in, it finally occurs to him that it might be useful to teach his mates some magic, and he actually accepts his friends’ help when it comes to defeating Voldemort.

Or, is it just because I stan Dan?

On reflection, though, most of my positive feelings towards Harry Potter actually stem from my more recent love for Daniel Radcliffe — which began when I saw a photograph of him walking twelve dogs around New York and enjoying a cigarette during the filming for Trainwreck and only intensified when he started posting comedy videos taking the piss out of his own celebrity status. The icing on the cake? The unwavering support he has shown the trans community. Legend.

That said, Harry’s decision-making still leaves a little to be desired

Honestly, I lost count of the number of times various characters warned Harry Potter that Voldemort would most likely try and trick him by planting false visions in his mind… only to be completely ignored. Snape dedicates literal hours to spelling out how it’s vital that Harry practises Occlumency to stop the Dark Lord taking over his brain, and yet their first and only lesson ends with the young wizard departing after arguing with Snape and forgetting all about it.

With this in mind, you’d think he might be a little cautious after seeing a vision of Sirius Black in mortal danger. Why on earth didn’t Harry pick up his handy two-way mirror — y’know, the one which gives him a direct Facetime-esque communication with his godfather — to quickly check in? Nope, instead, he and his mates storm straight off to the Ministry of Magic, where… surprise surprise, Old Voldy’s set a trap, and Sirius later perishes in a grisly fashion. Nice one, Potter.

On further reflection (geddit), Harry didn’t even need a magical mirror to drop Sirius a line, because presumably there’s nothing to stop wizards from snapping up a cheeky deal on an iPhone X. Even if using muggle technology is frowned upon culturally, you have to admit it’d make Harry’s life a lot easier if he used WhatsApp instead of trying to communicate through the Floo network.

Based on the clumsy manner in which the Order of the Phoenix attempt to navigate the tube, however, the only logical conclusion is that Hogwarts is filled with a bunch of luddite boomers who are incapable of using any kind of technology in their quest to outsmart Voldemort. It’s a shame: blasting him with one of those incredibly violent Dyson airblade hand dryers for a couple of minutes would probably blow him to smithereens.

In closely related news, there’s one scene that sticks with me even now, emblazoned upon my retinas forever like one of Dolores’ nasty punishments. When Hagrid returns from trying to recruit a bunch of giants to Dumbledore’s army, he’s been beaten up — and in order to treat his black eye, he casually mops his own face with a piece of bloodied steak before chucking it onto the floor for Fang. An ice-pack might be a bit more hygienic, hun.

Why is Voldemort scared of the office?

As Kingsley Shacklebolt quips to the Ministry’s top brass, Fudge: "you may not like him, Minister, but you can't deny, Dumbledore's got style!" In his final stand-off with Voldemort, Old Dumbles puts in an absolutely heroic shift, turning flaming snakes into huge bowling balls of water, transforming a rain of razor sharp glass into sand, and holding off unspeakable evil while Harry unhelpfully rolls around on the floor in the corner.

Incredibly, none of this works in scaring Voldemort off — but just as he’s about to finish off his nemesis once and for all, a bunch of suits all turn up for another day at work. This sight apparently horrifies Voldemort so much that he disappears immediately. Perhaps in the next film they should try to destroy him with an office paper shredder.

It’s a story that rings true with current times

Despite Voldemort’s dark mark being emblazoned across the sky, nine highly dangerous Death Eater wizards fleeing from Azkaban, and Harry’s lightning scar palpitating every five seconds like a Google Alert, the Ministry of Magic wants nothing to do with the fast-approaching Second Wizarding War and do their best to smear Harry and Dumbledore as liars in the press.

Typically, they only realise the error of their ways when poor Potter’s on death’s door, and their entire building has been ransacked in the final battle. The government staring straight down the barrel of a rapidly-approaching crisis while refusing to acknowledge it to stay popular… sounds strangely familiar, doesn’t it?

It leaves us with a heartwarming message

Maybe it’s the fact it gets dark at about 3 p.m. at the moment, or maybe I’m just a big old softy, but either way, I found myself welling up at several points during Order of the Phoenix. Mostly, when Harry finally realises why he and Voldemort aren’t so similar after all — while the dark lord’s a bitter old hag with no friends and an unhealthy lust for revenge that dates back to his school days, Harry’s got loads of mates, a blossoming romance with Cho on the cards, and the kind of moral compass that a corrupt old Slytherin alumni can only dream of. Love and happiness for the win!

More like this
Anne Hathaway Shared A "Thrilling" 'Princess Diaries 3' Update
By Darshita Goyal
Sandra Bullock’s Razzies Speech Proves She’s The Ultimate Miss Congeniality
By Sam Ramsden
Is Winter 'Love Island' Flying Too Close To The Sun?
By Jason Okundaye
Mollie Gallagher Has A Deeply Personal Reason For Taking Up Skating
By Maxine Harrison
Get The Very Best Of Bustle/UK