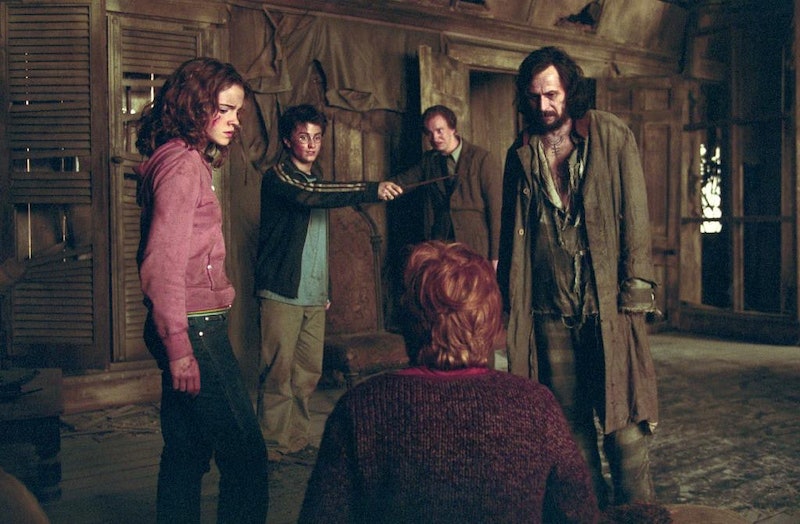 The tradition of the annual Harry Potter marathon each festive season is a real holiday highlight, but this year – with our favourite Hogwarts alums set to reunite New Year’s Day to toast the series’ anniversary – it feels even more special. Having watched the first two films, I came to the third instalment, Harry Potter and the Prisoner of Azkaban, only to remember what a brilliant film it still is.

It’s here that we receive an introduction to the Dementors — who author JK Rowling created to be physical embodiment of depression, and meet the characters of Sirius Black and Remus Lupin. But far more importantly, it’s in this film that we hear Alan Rickman’s beautiful enunciation of “turn to page 394”, and it goes without saying that this is probably the only movie where they got Harry’s hair right.

The film has been lauded for its cinematography, with it being the first and last Harry Potter film of Mexican film director Alfonso Cuarón. The famed director has a wonderful eye for symbolism — the overall blue tinge to the film contributes to a looming feeling of dread and his added touches are noticeable, from the dishevelled Hogwarts uniforms to the gloomy setting. The cinematography in this film is special; there are spectacular views of Hogwarts and great uses of continuous shots. When Harry rides Buckbeak, there’s a real sense of freedom and childish wonder that he’s never experienced before — but let’s forget about the questionable ending shot of the film that is 90% zoomed in on Harry’s face.

Below, 15 things that stood out as I rewatched Harry Potter & The Prisoner Of Azkaban.

It is well dark

The first notable thing about the film is the sheer darkness of it all: the Warners Bros logo at the beginning is a sinister metallic grey instead of shiny gold and the film overall has a depleted colour tone. While it makes sense for the fourth film, Harry Potter and the Goblet of Fire, to be darker given Voldemort’s return, the tone of this film is much more ominous from the outset: a killer’s on the loose and there’s a traitor masquerading as a pet rat.

The film opens with Harry repeatedly casting “Lumos Maxima” under his duvet. Presumably for homework but under Ministry of Magic rules, magic outside of the realms of Hogwarts, or at least in the presence of a Muggle, is strictly forbidden. So this completely unnecessary use of magic doesn’t make sense, and while we’re all concerned about inflating one’s aunt, this initial scene contradicts the system, and the later books, that see Harry punished for his use of magic.

Aunt Marge is that relative

You know the one I’m talking about. The one with “provocative” opinions, who likes to be louder in voicing those opinions than most, whose mere voice inspires a feeling of visceral dread. To be completely honest, the scene where she’s insulting Harry’s parents gives off uncomfortable Christmas dinner vibes all around — and culminates in complete chaos. Entitled, arrogant and unaware, Aunt Marge truly is the nightmare nobody wishes to see. Or hear.

One ill-judged addition to the film is the inclusion of a severed, shrunken head (‘Dre Head’) on the Knight Bus. It might seem a simple setting choice at first, but it’s also out-of-place and politically questionable — put simply, why is this… head talking with a Jamaican accent with long dreadlocks? Naturally, there’s nothing wrong with that, but who thought that would be a good idea? This adds nothing to the plot and — in spite of the much-needed representation in these movies — acts as a continuation of the films’ (and novels’) misrepresentative caricatures of people of colour.

I found myself slightly alarmed by Harry’s acceptance of Lupin offering him some chocolate. He’s a lovely character — as we know from the end of the series, with his unwavering loyalty to Harry, Lily and James — but with all the ‘stranger danger’, it’s a little disquieting to accept something from somebody you hardly know.

Emma Thompson is simply the best

Not just for enthusiastically singing (and dancing) to Adele, of course. Her versatility as an actor is admirable; her renditions of prophets’ enchantments – she tells Hermione her soul is “as dry as the pages of the books to which you so desperately cleave”. Ouch. Divination with Professor Trelawney culminates in the frightening trance-like rendition of the prophecy that Voldemort will reunite with a traitor whose “heart rots with murder”, something that frightened me as a child and, well, still does.

I truly believe that not enough people talk about this. The scene in which Professor Lupin teaches the third-years how to respond to a Boggart encapsulates the magic of Hogwarts and his ability as a professor. It’s somewhat telling that Neville’s Boggart is Professor Snape, and while Harry’s Boggart takes the form of a Dementor, I’d say the real problem here is Parvati’s. When she first faces it, it appears as a snake — and to manipulate it into something ‘ridiculous’, she transforms it into an unsettlingly huge clown jack-in-the-box. I’d face the former over the latter any day.

Even in Hogwarts, they still have to do sports in the rain

Part of the film’s unyielding allure centres on its relatability, and there is some consolation in this film in the way Hogwarts itself seems far more relatable than it did in the past. Students endure, as we have endured, sports in the rain; the teachers teach from projectors and, from what looks like Powerpoints (look at your Defence Against the Dark Arts class, Professor Snape); they have a choir. The somewhat dishevelled appearances of the young cast — Harry’s general messy haircut, and the way the children styled their uniforms (untucked shirts, unbuttoned collars, differing lengths of ties) — is a far cry from the neat, ordered uniforms of the Chamber of Secrets and Philosopher’s Stone.

The obsession with a pendulum is jarring

The time-turner is central, but is it really necessary to have that pendulum constantly swinging? No? I thought not. Though they can keep the wizarding pictures that move in real-time, as opposed to the Muggle version of endlessly repeating gifs.

Nothing is more entertaining than seeing Draco get scared by Harry in an invisible cloak. Nothing. And it thankfully detracts from the point below.

There is one… cringeworthy scene

In response to finding out Sirius Black ‘betrayed’ Harry’s parents, Harry runs to the woods and sits there, crying. A natural emotion, of course, except there’s one slight problem: Radcliffe’s portrayal of Harry is completely unconvincing. And then there’s the deployment of, “I hope he finds me. Because when he does, I'm gonna be ready”, and, when he screams — wait for it — “He was their friend!”

Don’t get me wrong, Radcliffe is an accomplished actor and fully comes into his own as the films progress, but this scene was probably better left out than kept in.

There’s probably been a time in your life where you’ve felt like a third wheel. Only now you can see what it looks like on screen. Towards the end of the film, there’s a scene, which has gathered much attention, where Harry is clinging on to Hermione’s shoulder for dear life, except her priorities in that moment lie with Ron.

Harry should have let Lupin and Black kill Pettigrew

Controversial (and spoiler alert), but Voldemort’s return would have been postponed at the very minimum instead of thrusting Harry and his friends into the depths of dark magic at the tender age of fifteen. So yes, it would have solved a lot of problems.

A somewhat welcome change from the snakes and spiders of Chambers of Secrets, the scene where Lupin morphs into a werewolf is genuinely unsettling. During the scene, we fear for Lupin just as much as we fear the transformation itself. The children’s fear of the werewolf is understandable, though not their fear of a dog that seems, at first glance, smaller than them.

The importance of familial relationships

There’s a palpable sense of loss as both Lupin and Black exit at the film’s end. In this film we finally see Harry receive some semblance of a paternal figure in the form of Remus Lupin and Sirius Black (although Arthur Weasley tried his best, bless him), who show Harry the love and care he deserved, but never received growing up.