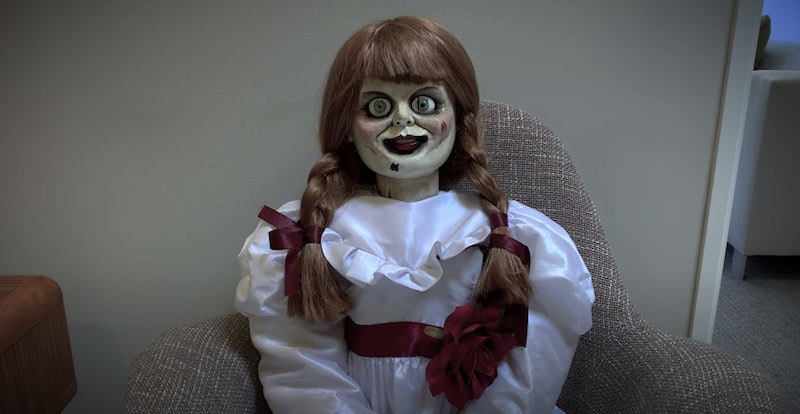 Just when you think this pandemic couldn't get more terrifying, a group of Warner Brothers employees decide to take some time to create a horrifying short film titled, Annabelle in Quarantine, that's guaranteed to give you nightmares. The clip features what the villainous doll has been up to in the New Line offices over the last four and a half months while all of the employees have been working from home. And yep, she's certainly been keeping herself pretty busy in the ghost town lot, coronavirus be damned.

Inspiration for the video reportedly struck in July, per Deadline, after three New Line employees decided to put some of their creativity to use during a “work equipment pick-up day." So they took the creepy movie prop and made a short film about all of the evil shenanigans Annabelle has been up to when left to her own devices in this post-COVID-19 workspace.

For the first four days, the doll remained pretty inactive, simply sitting in one of the office chairs, waiting for regular life to resume. But come Day 5, Annabelle grows impatient and begins preoccupying herself with some pretty relatable activities, such as making herself some popcorn, admiring her handy work in a screening of Annabelle Comes Home, sunbathing with some champagne, photocopying her body on the Xerox machine, and enjoying some candy alongside her stuffed animal friends. She even takes one of the Warner Brothers tour carts out for a spin around the lot — while wearing a mask, of course. Even evil dolls know not to mess with CDC regulations!

Given how popular the video became internally, New Line Cinema decided to share the clip with the world on all of its social media channels in honor of National Doll Day, which took place on Sunday, Aug. 2. The video also ends on a bit of a cliffhanger, promising viewers that Annabelle's antics will prove "to be continued," which could mean another chilling installment is in the works. After all, with so many TV and movie productions still on hold, this doll still has plenty of opportunities to get up to some more trouble.

The video only lasts for a minute and a half and her activities appear to be altogether fairly innocent, but that won't stop even the bravest of viewers from experiencing nightmares over this clip. One look into those pair of dead, glassy eyes is enough to send even the likes of a deadly virus running for the hills.