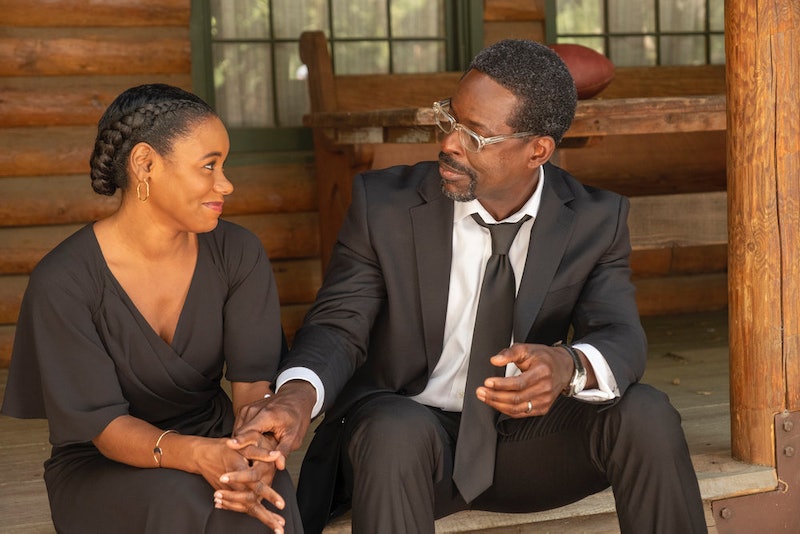 Ron Batzdorff/NBC
By Grace Wehniainen
May 25, 2022

Spoilers ahead for the series finale of This Is Us. There was no shortage of reasons to cry during the This Is Us series finale — from callbacks to early Jack and Rebecca, to the Big Three’s very last chant. But one part of the episode proved to be especially emotional for viewers watching along on Twitter: the full-circle moment between Jack and Randall.

Though Randall was mourning Rebecca throughout the episode, it was his relationship with Jack that defined the finale — starting with Jack teaching a young Randall how to shave. (“I do know a thing or two about facial hair,” Jack says. So true!) But the heavy, emotional stuff happens a little later. First, Deja tells Randall that she’s having a baby boy — whom she plans to name after William, who also appears during the episode. “Your grandson is gonna be named after a man I never met,” Deja says. “But I know him, because I know you.” Randall is pretty pumped to have a boy join the family — but also, he’s just plain touched. Just as one Pearson baby was named to honor Jack, now one will be named to honor another major father figure in Randall’s life.

Of course, the tears didn’t stop there. Later, Randall remarks to his siblings that Rebecca grabbed his hand firmly right before she died. In Rebecca’s caboose moment with Jack, we see that this moment corresponded with her grabbing Jack’s hand in the afterlife — suggesting a strong connection between Jack and Randall.

To make things that much more beautiful? The very last scene of the show (the whole series!!!) is a transition from Randall watching Deja, to Jack watching Randall as a kid. In a post-show interview with Variety, Sterling K. Brown described it as a “fitting encapsulation” of Randall’s place in the This Is Us mythos. “If Jack was the patriarch of this family and its inception ... then Randall is sort of the patriarch in modern times,” he said, adding that “the dichotomy of old and new life is very present for Randall here.”

Twitter users could not contain the tears at the full-circle-ness of it all.

More like this
Here’s Who Victor Chooses In The ‘Love, Victor’ Season 3 Finale
By Brad Witter
Everything We Know About When To Expect Money Heist: Korea Part 2
By Kadin Burnett
Wait, What’s Going On With Ben In That Umbrella Academy Season 3 Post-Credits Scene?
By Gretchen Smail
Viktor Hargreeves’ Coming Out Scenes Are The Sweetest Part Of Umbrella Academy Season 3
By Gretchen Smail
Get Even More From Bustle — Sign Up For The Newsletter