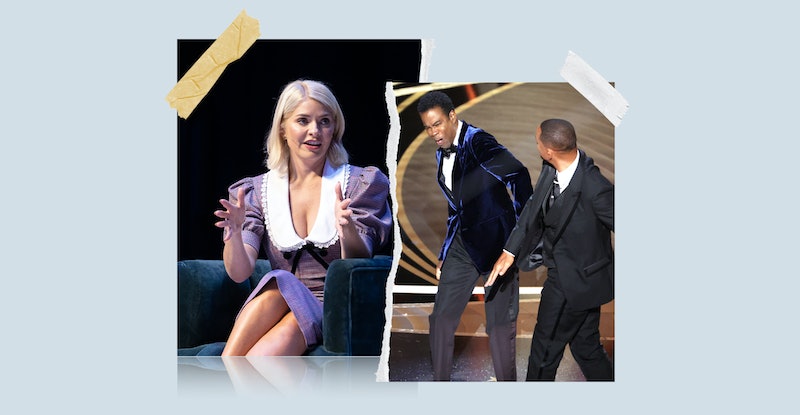 The events of the 94th Academy Awards certainly rocked the entertainment world, and were a major topic of discussion on ITV’s This Morning. Hosts Phillip Schofield and Holly Willoughby started the daytime show talking about the topic at hand, sharing their opinions and asking whether Will Smith’s physical confrontation with host Chris Rock was justified.

At first, Willoughby sympathised with Smith due to the nature of Rock’s joke about his wife Jada Pinkett Smith. “Obviously there’s no excuse for any sort of violence, and that was an assault on somebody,” she said. But Willoughby also noted how open Jada has been about her struggles with alopecia, and that it’s a condition she lives with day-to-day. “You can see it in Jada’s reaction, that she doesn’t want that being brought up anymore,” the presenter continued. “So, it’s not funny. It’s something she’s living with.”

During a phone-in later on in the show, Willoughby expressed how everyone makes mistakes — especially in regards to the people you love. “We’re humans. Has there ever been a moment when something like that happens and you’re not thinking of what you’re doing?” she said.

She continued: “I find this really hard to talk about, because every time I say something out loud, you're thinking in your own head, ‘There's actually no excuse for it.’ So I caveat everything I'm about to say, but for the sake of this conversation, just to talk around it. You know, humans make mistakes.”

Willoughby also expressed her surprise that Smith wasn’t taken out of the auditorium after his outburst. “I know that he was a nominee, but I was surprised he was allowed to sit back down because if any other person got up, slapped the host or anyone in the building, they’d have been taken out,” she mused.

Schofield offered a reason for this, citing that in those sorts of circumstances “it’s so shocking and so unusual [that] people don’t always know what to do.”

More like this
Paul Mescal’s Family Celebrated His Oscar Nomination In The Sweetest Way
By El Hunt
Yes, You Can Stream ‘To Leslie’ In The UK Now
By Sam Ramsden
Twitter Is Overjoyed By Angela Bassett’s Record-Making Oscar Nomination
By Maxine Harrison
Your Guide To Watching 'Everything Everywhere All At Once' In The UK
By El Hunt and Sophie McEvoy
Get The Very Best Of Bustle/UK
Sign up for Bustle UK's twice-weekly newsletter, featuring the latest must-watch TV, moving personal stories, and expert advice on the hottest viral buys.