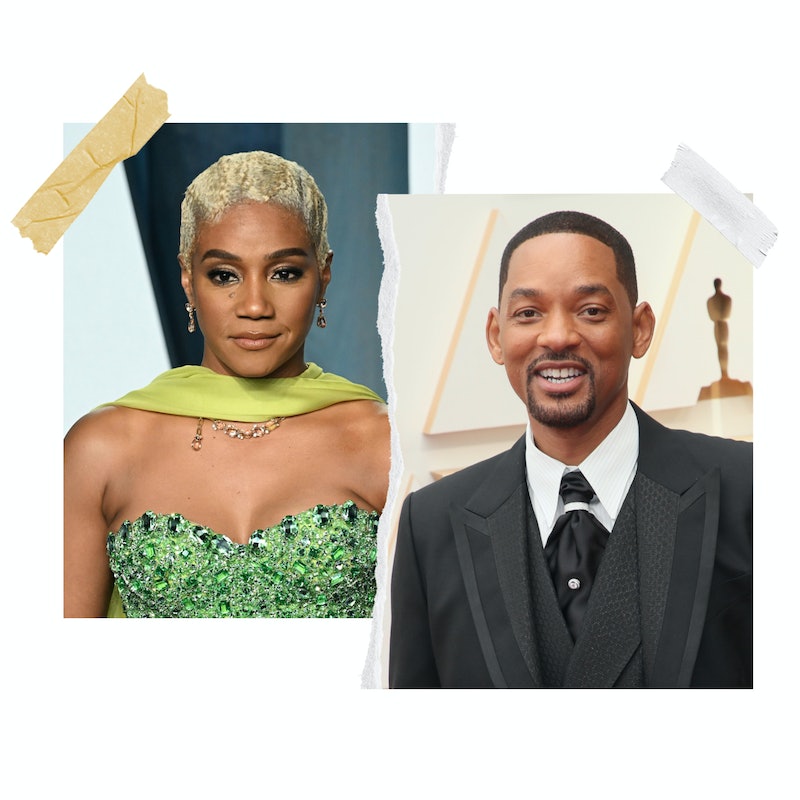 Tiffany Haddish is defending Will Smith for standing up for his wife at the 2022 Oscars. In an interview with People after the ceremony, Haddish praised the King Richard star for publicly calling out Chris Rock over an offensive joke he made about Jada Pinkett Smith’s hair. “When I saw a Black man stand up for his wife. That meant so much to me,” Haddish said. “As a woman, who has been unprotected, for someone to say, ‘Keep my wife’s name out your mouth, leave my wife alone,’ that’s what your husband is supposed to do, right? Protect you.”

The show-stopping moment occurred when Chris Rock said that he couldn’t wait to see the Red Table Talk host in G.I Jane 2. Jada, who has been very transparent about her hair loss and her battle with alopecia, was visibly bothered by the insensitive joke. Moments later, Will appeared on stage and slapped Rock across the face. “Will Smith just smacked the sh*t out of me,” the comedian said as the Collateral Beauty actor returned to his seat.

“Keep my wife’s name out your f*cking mouth!” Smith warned.

The incident triggered a mixed bag of reactions from viewers. While many agree that Smith had a right to defend his wife, others think he took it too far by resorting to physical violence. Even the Academy condemned the altercation. “The Academy does not condone violence of any form,” a statement posted to the Academy of Motion Pictures Arts and Sciences’ Twitter account read. Haddish, for her part, told People that the controversial Oscars moment “meant the world” to her.

“Maybe the world might not like how it went down, but for me, it was the most beautiful thing I’ve ever seen because it made me believe that there are still men out there that love and care about their women, their wives,” the Like A Boss star told the magazine. “Would you do that for your wife? Would you say, ‘Keep my wife’s name out your mother f*cking…’ Like, yes! Yes!” She also criticized Rock for not letting Will and Jada know about the joke beforehand.

“Why would you do that? He didn’t even run the joke by her, but she was hurt though,” Haddish continued, explaining that the comedian should’ve reached out to the couple as a “friend.” “If she wouldn’t have been hurt, [Will] probably wouldn’t have said nothing,” she added. “But you could see he was clearly… And they exploited it. They exploited her, so ‘I have to do something’… He protected his wife.”

More like this
"Lavender Haze" Star Laith Ashley Breaks Down Filming With Taylor Swift
By Jake Viswanath
Twitter Is In Awe Of Taylor Swift’s “Lavender Haze” Music Video
By Jake Viswanath
Hilary Duff Is “Optimistic” About A 'Lizzie McGuire' Reboot
By Alyssa Lapid
Jennifer Coolidge Hunted For Jewels & Lashes In J.Lo’s Hotel Room
By Jake Viswanath
Get Even More From Bustle — Sign Up For The Newsletter
From hair trends to relationship advice, our daily newsletter has everything you need to sound like a person who’s on TikTok, even if you aren’t.