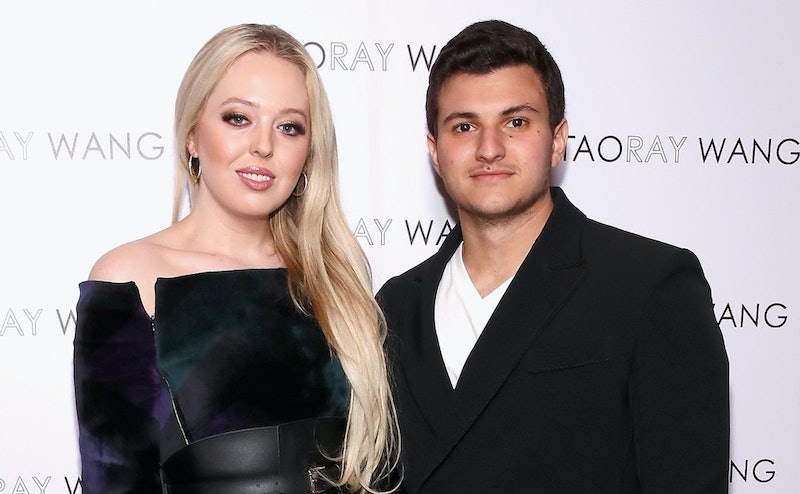 2021 has brought a spike in COVID-19 cases, Donald Trump refusing to accept his loss in the 2020 presidential election, and a storming of the U.S. Capitol, and one of Trump's daughters thought it the perfect time to reveal some personal news. Tiffany Trump is engaged to Michael Boulos, which she decided to announce on Jan. 19, just a day before her family leaves the White House and before President-elect Joe Biden's inauguration.

Tiffany announced the big news on Instagram in a White House farewell post, sharing a photo of her and Boulos posing near the White House Rose Garden. "It has been an honor to celebrate many milestones, historic occasions and create memories with my family here at the White House, none more special than my engagement to my amazing fiancé Michael!" she wrote on Instagram. "Feeling blessed and excited for the next chapter!" Boulos also shared the photo on his own account. "Got engaged to the love of my life!" he wrote. "Looking forward to our next chapter together."

Trump has not publicly congratulated his daughter on her engagement, likely because he's too preoccupied with his very turbulent transition period (oh, and his Twitter account was permanently banned). The outgoing president is currently facing his second impeachment trial after refusing to take responsibility for inciting the Jan. 6 insurrection on Capitol Hill.

Tiffany and Boulos, a business executive and heir to the multi-billion dollar Boulos Enterprises in Nigeria, have been linked since 2017. The two reportedly met over the summer in Mykonos, Greece, at Lindsay Lohan's Beach Club. While relatively more low-key than the rest of her siblings, Tiffany and her beau have attended various White House events together, including the State of the Union last February. In December, Tiffany also shared a snapshot on Instagram with parents Donald and Melania alongside Boulos and his parents, Sarah and Massad Boulos.

A source told People on Jan. 14 that Tiffany and Boulos hope to set up roots in Florida amid the final days of her father's presidency, adding that they are house hunting in Miami Beach. The two stopped by a lounge in Miami a few days prior to Trump's impeachment hearing. "Tiffany looked happy and content because she was able to enjoy herself without people pointing her out," the source said. "She and Micheal were lovey-dovey and laughing a lot."