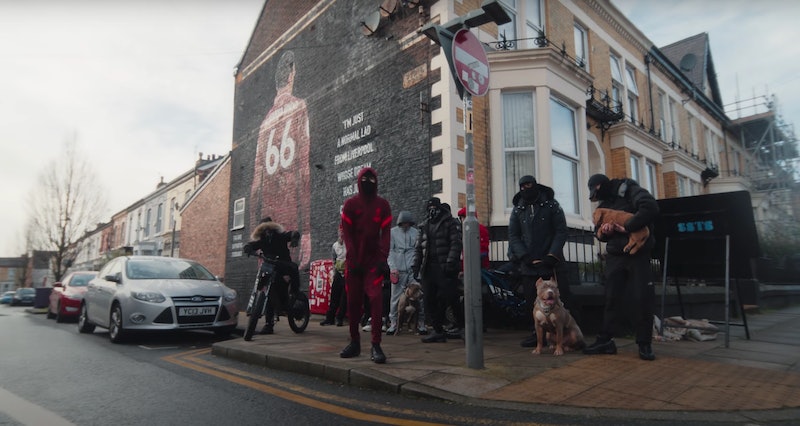 From PinkPantheress to trainspotting icon Francis Bourgeois, there’s no denying that TikTok breeds some of the best up-and-coming talent. The latest artist to take the platform by storm is none other than the elusive Liverpudlian rapper, Hazey, who has been dominating TikTok since he released a clip of his latest track, “Packs and Potions”. Fans on the app have been loving Hazey’s distinctly Scouse accent and clever football puns. But who exactly is Hazey and why does he wear a mask?

The up-and-coming drill star was recently scouted by Sony music and this week released the official audio and music video for his popular track. And, like many UK drill rappers, he keeps his identity a secret by wearing a mask or balaclava in his videos, Instagram, and TikTok profiles. But there are still a few things we can guess about the elusive rapper.

According to Complex, Hazey is 17 years old. This is further confirmed by his appearance on Bl@ck Box’s Under 18’s cypher (where rappers freestyle/spit bars one after another on the same track). He’s also a big football fan, as suggested by the viral verse in which he references footballers such as Liverpool’s Trent Alexander Arnold, who he recently met following the song’s success.

While you wouldn’t be able to pick Hazey out of a crowd thanks to his trademark bally, his accent is very distinctive outside of Liverpool. He appears to be a proud Scouser, shooting his first official music video outside Liverpool FC’s Anfield Stadium. The video, directed by Archie Erskine, sees Hazey and friends biking across the city, leading fans to praising the artist for putting the Liverpool drill scene “on the map”.

Hazey is yet to speak publicly about his true identity, but, as rapper S1 told The Face, UK drill rappers cover their face for a variety of reasons. “Some people cover up because they might be doing stuff on the roads,” he told the title. ​“Some people cover up their face because their family don’t know they’re rapping or in a gang. But also, I’ve been around a load of yutes who wear masks and balaclavas, and they’ve got no participation in madness. They’re good kids, but they’re trying to be like rappers, so they cover up.”

Incognito or not, Hazey’s latest track continues to be heavily repeated on the app, with the #packsandpotions hashtag amassing over 6.1 million views at the time of writing. Young famous faces are also in on the vibes and have made videos using the song, including Love Island’s Toby Aromolaran and popular creator Tega Alexander. Hazey has also received the seal of approval from none other than fellow viral rapper ArrDee, who appears to be rooting for the young rapper’s future chart success.