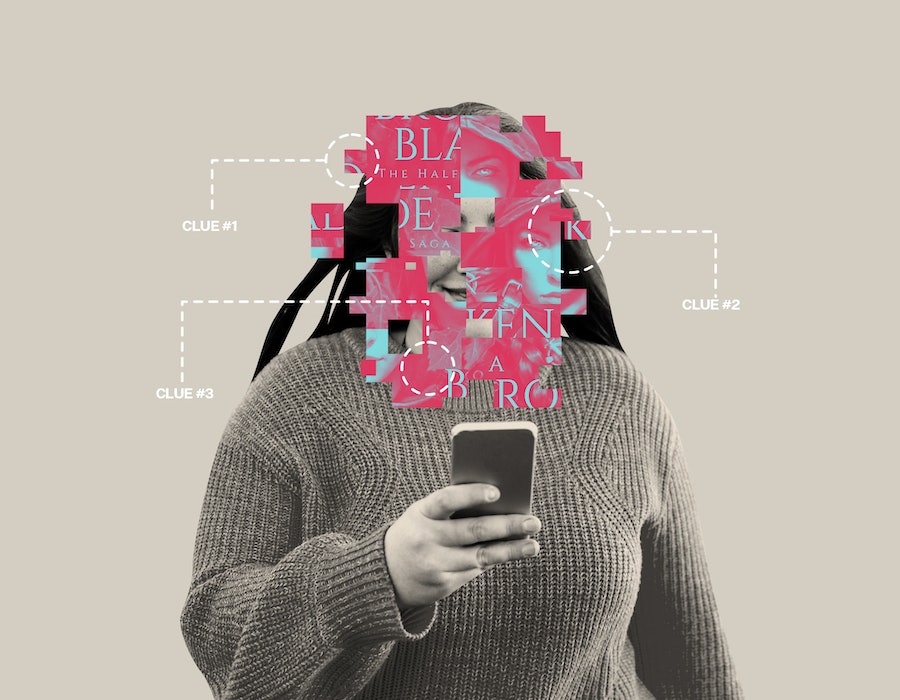 In December 2021, 25 prominent BookTokers — TikTok influencers who create content about books — received curious packages in the mail. The boxes each contained the self-published fantasy novel A Broken Blade, written by an anonymous author, along with a wax-sealed, personalized letter, and a cipher — one of five total “hints.” The account @abrokenblade also appeared on TikTok, inviting the wider BookTok community to join in on the mystery. “Read the book to discover which BookToker wrote it,” the first video said. “Follow for clues. Unmask me if you can.”

For the next two weeks, A Broken Blade was all BookTok could talk about; the hashtag #abrokenblade racked up over two million views. The internet loves solving mysteries, and the chance to unveil a fellow BookToker was too tantalizing to miss. “I just want BookTok, as a collective, to figure it out before [the author reveals themselves],” Amivi of @amivireads told Bustle in early December. “I want one win for us.”

Amivi, who does not disclose her last name online, was a part of the so-called Scooby Gang: a collective of otherwise unaffiliated BookTokers who worked together to solve the mystery, whose ranks included Bri Boehm (@sapphichobbit), Cabria Sha-Nae’ (@shanae0599), Cait Jacobs (@caitsbooks), Deeqy Omar (@booksandbants), El Massey (@ermreading), Frances Diederich (@frances.books), Graciella Delgado (@grapiedeltaco), and Tori Forte (@toriandbooks). They spent long, sleepless hours holding virtual brainstorming sessions and documenting their work in a public Google Doc. Jacobs even coded a program that rearranged the letters from the hints, looking for something meaningful. The chance to pool their resources and collaborate, to share their excitement for the mystery with others who felt the same, was intoxicating.

Their hard work paid off on Dec. 15, less than a week after Bustle first spoke with Amivi and Jacobs. They’d surmised that the author belonged to a First Nations community after picking up on Ojibwe words in A Broken Blade, among other clues. When a tip from another sleuth pointed them to the Ojibwe word for thank you, “miigwetch,” the Scooby Gang finally unscrambled the message: “This book was written by Melissa Blair. Miigwetch for playing along.”

Melissa Blair, aka @melissas.bookshelf, is an Anishinaabe-kwe writer and book reviewer from a small town in the Algoma District of Ontario. A Broken Blade is her debut novel, and thanks to BookTok, where the hashtag #ABrokenBlade has racked up more than 2.5 million views to date, she sold enough copies to earn back her self-publishing investment in just five days. (According to CTV News, the novel sold 4,000 copies in the first two weeks following its release. Blair declined to share the details of her earnings, but Reedsy reports that “most authors spend $2,000–$4,000” to self-publish, while MasterClass pegs the figure at $2,000 to $5,000.)

A Broken Blade is hardly the first title to take BookTok by storm. The community has propelled backlist titles onto bestseller lists — like Colleen Hoover’s 2016 tearjerker It Ends with Us, which sold 768,700 copies in 2021 largely thanks to its virality — and inspired publishers to curate BookToker-aimed boxed sets; Barnes & Noble and many other booksellers now devote entire sections to titles that BookTokers have fallen in love with. With new titles, the platform begun to act as an acquisitions editor: Last year, Alex Aster nabbed a six-figure book deal after users went wild for her story idea. All this, and the community is only growing. “I think that BookTok is going to be where the vast majority of the book community ends up over the next three to five years,” says August Harper (@augustharper), a former children’s bookseller.

Blair’s novel may, however, be the first viral title to be written by one of the community’s own influencers, and with BookTok’s preferences in mind. As Blair said in her letter to Amivi, “I wrote this book for BookTok.” Quite literally: After making a list of paranormal romance tropes that BookTok liked the most, she found a way to wedge them all into her novel — except for mystery and intrigue. “That didn’t fit into the world [of A Broken Blade],” the author tells Bustle. That’s when it hit her: “What if I release it as a mystery? BookTok loves putting things together.”

BookTok did indeed love it. Alicia Ross (@uhleeseeuh.mp4) said it was “an honor” to receive a box. Deirdre Morgan (@deirdrerosemorgan) felt similarly: “There was a very lovely note inside the book, saying that [the author] had been following me for a long time,” she said. “That just meant so much to me, that they wanted to send me this book.” When Breana Newton’s (@breana_reads) box came a day late, she worried she’d been excluded, and “got [a] sense of FOMO” wishing that she’d been able to help solve the mystery.

Newton wasn’t alone in feeling left out. BookTokers who weren’t part of Blair’s initial PR push — including Joshua Del Toro (@joshuas_space), Kevin Tyler Norman (@kevintnorman), and Sanja Veldhuizen (@sanjasbestshelf) — rushed to buy the book, as much for its beloved tropes as for the chance to participate in the mystery.

The Scooby Gang was concerned that the sentiment toward A Broken Blade and its author would change after Blair’s unveiling, because, well, it’s the internet. Thankfully, Blair’s experience has been positive. “Everyone’s been super kind and lovely,” she tells Bustle, adding that she’s now friends with the Scooby Gang.

Now, the biggest question for Blair is this: How will she follow her viral marketing campaign? Will its success carry over to the sequels for A Broken Blade, which are already in the works? “I’m not really worried about it,” Blair says. “If it takes some time for me to grow the series’ marketing, I’m OK with that. I work full time. I don’t need the book to sell.” Traditional publishers have begun to notice: After her success on TikTok, Blair has heard from traditional publishing houses expressing interest in A Broken Blade and its planned sequels, but nothing is set in stone at the time of this writing.

Regardless of her future sales, Blair may have already set a precedent for book marketing on one of the world’s most popular social media platforms. But publishing marketing experts ask that aspiring writers manage their expectations. “It's definitely a case of ‘watch this space,’” says freelance book marketer Kat McKenna. “Book marketers are always creative and excited by unique and standout ideas, so expect [Blair’s A Broken Blade campaign] to have not gone unnoticed.” Still, she adds, “it's too soon to tell if this is going to guarantee a long and successful career for an author.”

Publicists are understandably hesitant to put all their eggs in one social media basket. TikTok’s popularity doesn’t necessarily inspire confidence, and that’s due in part to the newness of the platform. “The thing with TikTok is that it just moves too damn fast for anyone to accurately move on a trend,” says Erewhon Books Marketing and Publicity Manager Martin Cahill. “Until this sort of success happens often enough for patterns to be glimpsed and acted on, I don't know how normal a strategy it'll become.” Jeanne-Marie Hudson, Berkeley V.P. and deputy publisher, feels similarly. “[TikTok’s] trends are changing constantly, so what works for one book might not for another,” she says. “Nothing guarantees success better than readers falling in love with a book and generating grassroots support for that book — both online and off.”

And the momentum hasn’t continued to grow for A Broken Blade following Blair’s reveal. While Blair claims that sales are steady, the conversation on the platform has naturally moved on to other topics — like Illumicrate, a subscription box service that recently released new editions of Freya Marske’s A Marvellous Light and R.F. Kuang’s now-completed Poppy War trilogy.

But Blair isn’t interested in traditional markers of success. If she was, she would’ve gone the usual route, spending years writing and revising her novel, struggling to find an agent, and eventually getting a publishing house to buy it — then waiting even longer, between nine months and two years, to finally see her title in bookstores. Instead, she wrote the first draft of A Broken Blade over the course of 20 days in May 2021, edited it from June to October, and had a copy in her hands by the end of November. “I wanted to put it out as quickly as possible,” Blair says. “That’s kind of the opposite of traditional publishing. If I had tried to traditionally publish this, it wouldn’t be out there yet.”

More like this
Zendaya Shut Down Those Viral Pregnancy Rumours
By El Hunt
At 14, Jenny Han Wrote Rom-Coms About Her Friends & Fan Mail To Leo DiCaprio
By Alyssa Lapid
Ottessa Moshfegh Is Happy To Be Your “It” Girl
By Arya Roshanian
'The Summer I Turned Pretty' Book Ending Is An Emotional Rollercoaster
By K.W. Colyard
Get Even More From Bustle — Sign Up For The Newsletter