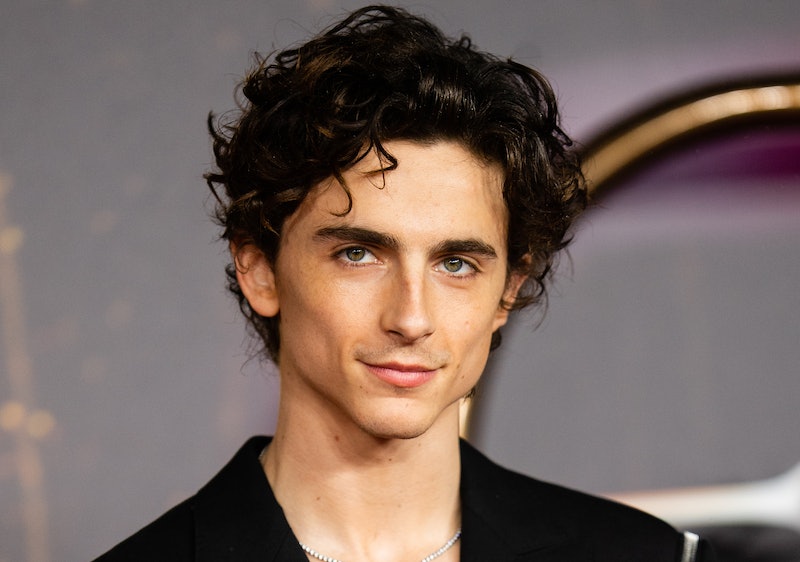 To promote the upcoming science-fiction film Dune, co-stars Timothée Chalamet and Zendaya have been showing up in extremely fashion-forward outfits, certifying themselves as this year’s style icons. But now Chalamet has taken things one step further. On a recent press run, the actor sent Harry Potter fans into a tailspin when he appeared wearing a Slytherin jumper and, despite my personal allegiance to Gryffindor, I have to respect the Call Me By Your Name star’s seriously cool nod to the wizard franchise.

Chalamet and Zendaya were during promotional rounds earlier this week to discuss their Dune characters when eagle-eyed fans spotted Chalamet’s Harry Potter merch. The fitted, forest green zip cardigan comes emblazoned with the Slytherin emblem — which is, of course, one of the four Hogwarts houses associated with some of the most powerful (and sinister) witches and wizards in Harry Potter, including Severus Snape and Tom Riddle (Lord Voldemort).

For Harry Potter die-hards, the Slytherin jumper certifies Chalamet as a fellow stan, with one person tweeting, “I know I'm late to this but Timothee Chalamet wearing a Slytherin sweater is something that is so personal to me… (even tho I'm a Gryffindor).”

Others couldn’t help but compare Chalamet to Slytherin head honcho and Harry Potter’s nemesis Draco Malfoy, and it’s hard not to see it. “As if @RealChalamet could get hotter here he comes repping the Slytherin attire like a god damn modern day Draco Malloy,” tweeted another fan.

The Harry Potter love should come as no surprise from the 25 year old actor, who has spoken previously about his love for the wizard franchise.

Back in 2019, Chalamet told Seth Meyers during his Late Night show that he was “starstruck” meeting Harry Potter star Emma Watson when they both worked on the film Little Women.

“I grew up on Harry Potter in some way,” Chalamet told Meyers. “I grew up seeing those movies. So that first time seeing Emma Watson — this is going to be weird for her to see now — that was definitely a weird moment. I had to work past that.”