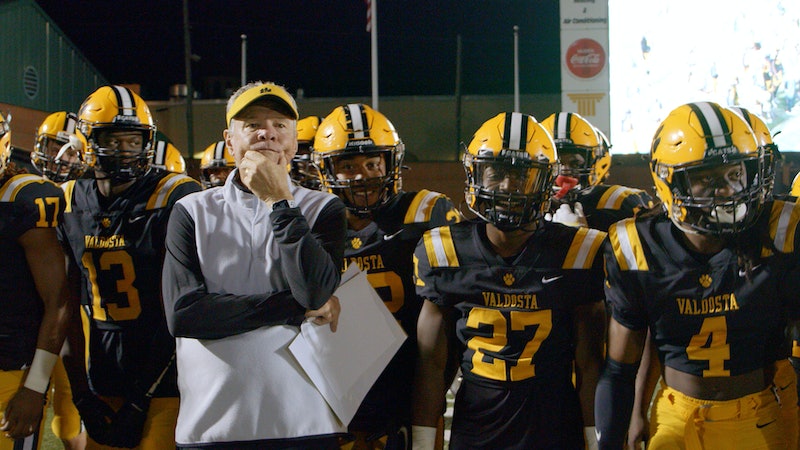 If you’re missing the small town football of Friday Night Lights, Netflix may have your next fix. Titletown High, a reality series premiering on Aug. 27, follows the football team at Georgia’s Valdosta High, who the newly anointed Coach Rush Propst is hoping to make into state champions. Like FNL, it’s a mix of sports and drama, including a love triangle between tight end Grayson Leavy, his girlfriend Lenley Gross, and his longtime BFF Zoey Watson, plus a player who hides his relationship from his mom.

Netflix hasn’t yet announced their long-term plans for the show, but if it can recapture any of the magic of FNL — which ran for five seasons — it may have a long future ahead of it. Here’s what to know about a potential Season 2.

Season 1 was filmed during the 2020 football season and aired nearly a year later. If Netflix greenlights Season 2 in time to film for the 2021 season, viewers can expect it to hit the streaming service in August 2022.

Friday Night Lights was very good at retaining the show’s chemistry even as characters graduated and left town. Titletown High can do pretty much the exact same thing with its cast. Though seniors will have left the team, Season 2 can still follow the lives and romances of younger players like Grayson as well as introduce new names.

One person who definitely won’t be returning? Coach Propst, whose contract at Valdosta was not renewed for 2021 after allegations emerged that he solicited funds to pay for the living expenses of players he’d recruited. On the one hand, it’s hard to continue the show without the nucleus of the team — imagine Friday Night Lights without Coach Taylor — but it also opens up the opportunity to introduce a new (and perhaps less polarizing) head coach. Propst wasn’t exactly welcomed by everyone in town, and Coach Taylor was an effective character precisely because he was so beloved.

A second season of Titletown High wouldn’t have to look very hard for story. The beginnings of the Coach Propst scandal are only barely introduced at the end of Season 1, and certainly a second season would explore the fallout and team’s attempt to recover in the 2021 season.

Season 1 also does a good job at capturing the high-stakes dynamics of Valdosta both on and outside of the team. Season 2 could continue to follow some of the threads introduced in Season 1, like Grayson’s tangled romantic life, or perhaps expand to feature more of the cheer team and cast members we didn’t see as much of, like Kaili and Malia Spells.

As more information about the show’s future become available, this post will be updated.

More like this
Netflix's 'Bling Empire' Season 3 Trailer Includes A 'Selling Sunset' Cameo
By Kadin Burnett and Sam Ramsden
Here’s When You Can Expect More ‘Indian Matchmaking’
By Brad Witter
‘The Ultimatum: Queer Love’ Is Officially On The Way
By Radhika Menon and Kadin Burnett
Here's How To Apply For 'Love Is Blind,' No Matter Where You Live In The US
By Grace Wehniainen
Get Even More From Bustle — Sign Up For The Newsletter