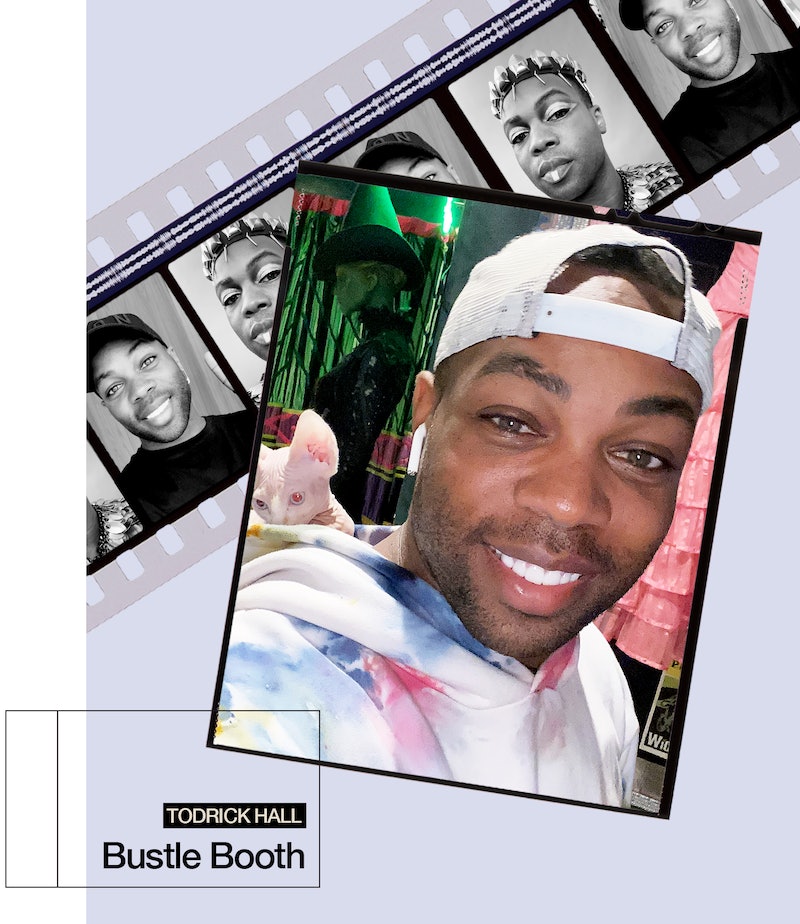 Todrick Hall’s mission in life is to include everyone. The 36-year-old entertainer has worn many hats (and wigs) since auditioning for American Idol in 2009: singer, songwriter, actor, Broadway performer, YouTuber, choreographer, and even RuPaul’s Drag Race judge. But on Zoom, sitting in his Los Angeles home, Hall is reflecting on how incorporating everybody in his work, no matter their race, heritage, gender identity, or sexuality, is his most important job.

“I truly want to play my part to create a world where my children and grandchildren won’t have to decide what group of people they’re going to hang out with and identify with the most,” he tells Bustle. “They’re just going to identify with people as people.” But he can’t forget his own experiences as an openly gay Black man, and the impact his story has on fans. “I am so moved when I see young Black queer kids that are so specific to what I grew up in,” he says. “I see myself, the old Todrick in the ’90s, confused, just wondering where in the world I fit in, because I didn’t see anyone who looked like me and who shared a similar story to me on television.”

Hall has incorporated Black LGBTQ representation across the board in his work, from his EP trilogy Haus Party to his theatrical, self-produced tours — the video for his most viral hit “Nails, Hair, Hips, Heels” put men of all shapes and sizes in heels before Harry Styles ever wore a dress on the cover of Vogue. “I see boys on TikTok wearing just skirts just because they liked them, and that’s something I’ve never seen growing up,” he says. “These kids are inspiring me and reminding me to reprogram all of the things that I think are associated with gender.”

However, he’s also taken lessons from his A-list idols on how to improve his own interactions with others. From Beyoncé, Hall learned not to call working actors “extras” on his projects, after choreographing her “Blow” video in 2013. “What I loved the most about her was how kind she was to every single person that was on her set,” he recalls. “They said, ‘We don’t like to refer to people as extras. We say dancers and featured dancers.’ There’s something associated with that word ‘extra’ that makes you feel less than, not important, and insignificant.”

And thanks to his longtime BFF Taylor Swift, he’s seen how to properly lift up his peers, pointing to how she tags her dancers in Instagram posts just to show love and promote them to her 100 million followers. “She is so about promoting other people and lifting other people up and collaborating and giving them opportunities and sharing her wealth,” says Hall, who co-executive produced Taylor Swift’s “You Need To Calm Down” video and gave an emotional acceptance speech when it won Video For Good at the 2019 MTV VMAs, “and in this day and age, a shout-out from Taylor Swift is currency.”

Hall, who introduced his boyfriend David Borum to his Instagram followers for the first time this month, spreads his mission of inclusivity to everyone, even cats. Hall recently crafted an entire music video, “We Don’t Scoop,” as an ode to AutoPets’ Litter-Robot, a self-cleaning litter contraption that made him feel comfortable enough to adopt three Sphinx cats. “My cats are the most social cats I’ve ever met in my entire life, and that's not just me bragging as a proud parent,” he says.

Learn more about Hall’s love Big Brother, The Little Mermaid, and The Wizard of Oz in his Bustle Booth questionnaire below.

I actually don’t drink coffee. Never have! If I’m getting ready for a show, I’ll sometimes drink tea. Anything with cinnamon, or a throat coat tea. It always comes as a shock to people that I don’t drink caffeine since I’m always so high energy. I just like to say that a natural form of caffeine just lives in my bloodstream.

What special skill or secret talent can you do?

I grew up in Texas, so I happen to be an excelled yodeler. Yoda lee hee hoo!

Anybody that knows me knows that I’ve been obsessed with The Wizard of Oz since I was a kid. So hands down, my favorite recent purchase are the original costumes from the Broadway production of Wicked. Owning the costumes worn by Idina Menzel and Kristin Chenoweth is quite possibly the coolest thing ever and I will cherish them forever.

I’m a pretty textbook Aries, and I love it. I’m spontaneous, a go-getter, and I like being a leader.

Hands down, The Little Mermaid. I can’t pinpoint exactly why it was my favorite, but I used to dress up and pretend to be Ariel.

It’s a Sin on HBO. Not only is it an incredible story, but the lead in the series, Olly Alexander, is such a talented artist. He’s a great actor and brings an unquestionable skill to the screen that leaves you in awe. It’s a must watch.

Beyoncé. She should be everyone’s idol. As Nina Simone once said, it’s an artist's duty to reflect the times. Beyonce uses her voice to promote change and drive meaningful activism. It’s telling that she’s remained relevant for such a long period of time. As a singer, I always respect artists that can actually sing, and do what they do on their record live. Her shows are always flawless.

My favorite show ever is Big Brother. It’s so entertaining and impossible to turn away from. I’d die to be on the non-celebrity season and be the first Black person to win the season. I’m looking at you, CBS.

“I’ll Be” by Edwin McCain or “Ready for Love” by India Arie.

The show It’s a Sin inspired me.

I would want people to say that I’m a hard worker. That I’m realistic and kind — and aware of my role and the contributions I bring to society.

More like this
The Ticketmaster Senate Hearing & Taylor Swift Tickets Debacle, Explained
By Jake Viswanath
Tour Rehearsals Didn’t Stop Taylor Swift From Attending The 2023 Grammys
By Jake Viswanath
Taylor Swift & Harry Styles Had A Secret Reunion At The Grammys
By Shahed Ezaydi
Beyoncé Just Announced Tour Dates: Here's How To Cuff Tickets To Her 2023 Shows
By Jake Viswanath
Get Even More From Bustle — Sign Up For The Newsletter
From hair trends to relationship advice, our daily newsletter has everything you need to sound like a person who’s on TikTok, even if you aren’t.