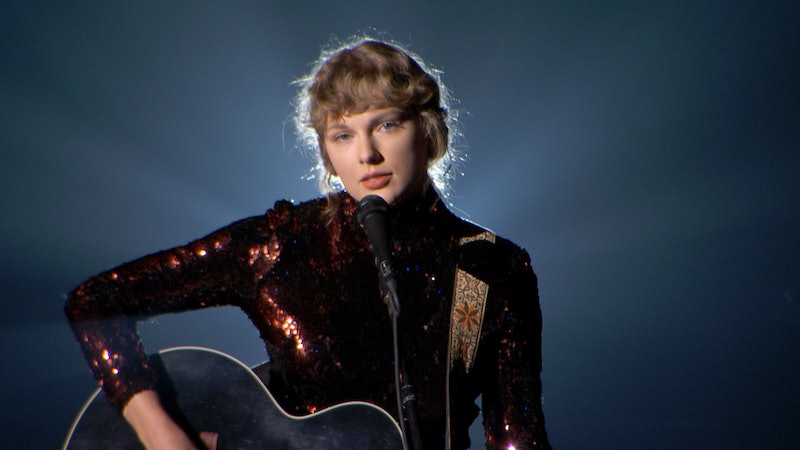 Taylor Swift overwhelmed fans with content in 2020, releasing two surprise albums, Folklore and Evermore, and a total of three documentary and concert films. Ever since, Swifties have been watching out for the singer's next move and looking everywhere for potential clues and Easter eggs. And thanks to Todrick Hall, one of Swift's best friends, fans are convinced she's about to drop even more new music after he tweeted a surprising theory.

Early on Thursday, Jan. 28, Hall — who has a years-long friendship with Swift and even co-executive produced her "You Need to Calm Down" video — tweeted what he thinks the singer's creative process looks like, especially in the wake of her most recent albums. "I have this theory that Taylor doesn't sleep," he wrote. "I legit believe she stays up all night, drops musical genius while everyone's sleeping and then sits by the fire with her cats and Joe giggling while the world tries to figure out what just happened."

Immediately, Swifties flooded Hall's replies asking if this was a hint that Swift had something up her sleeve. "Tell us what you know," several of them demanded. Needless to say, he got many side-eye emojis.

A couple of hours later, Hall addressed the many responses from fans and said that he doesn't know anything, including whether Swift is even working on new music. Like any other Swiftie, he was just pondering what she might be up to. "I just saw her post tonight and started thinking of what she might be whipping up in her bop kitchen," he wrote. "I'm just as excited as everyone else in the world. Re-fell in love with 'Delicate' yesterday, that song gives me butterflies."

Following Evermore's release on Dec. 11, fans speculated that a third new album would be released to form a Folklore trilogy after some eagle-eyed Swifties noticed that the word "woodvale" was printed on one of the Folklore album covers. However, Swift quickly debunked the theory, explaining that it was simply a code name used by her team when designing the album covers that they forgot to erase.

However, even if new music isn't in the cards, fans still have good reason to be on high alert. Swift has been working on the re-recordings of her first five albums since November 2020, even giving fans a preview of her new version of "Love Story" in a Match.com commercial. While she promised in December that she was working hard to get the re-recordings out soon, no date has been set as of yet. And given how she dropped Folklore and Evermore with less than a day's warning, they could arrive at any moment. Stay aware, folks.