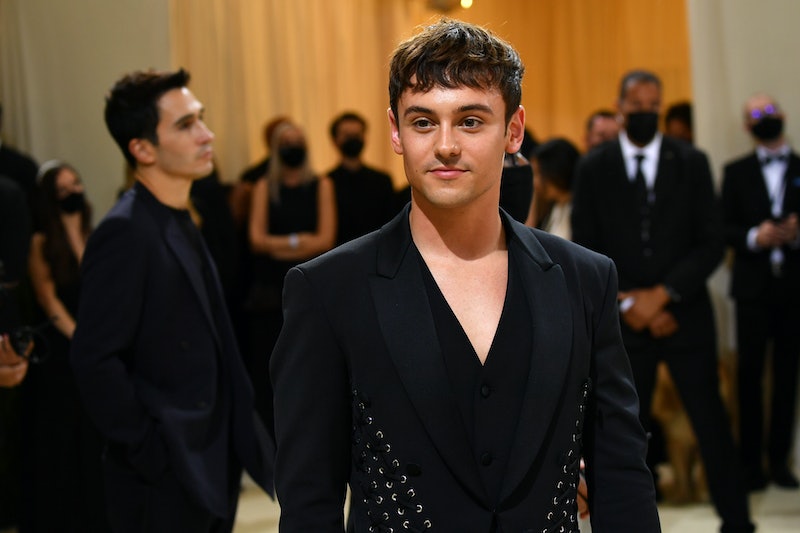 Of course, Tom Daley was knitting at the Met Gala, because as we all know by now the diver is not only an Olympic champion, he’s also a crafting legend. Not only did he look sharp on the red carpet and meet fellow sporting legend Emma Raducanu, he made time for his adorable hobby at the event of the year on September 13.

Daley shared a number of photos on his Instagram page of his appearance at Met Gala, showcasing his gorgeous, sleek black suit and his new knitting project: a red, yellow and green scarf.

The photo he shared of him knitting on Instagram was actually from his final suit fitting before the event, but he made sure to bring his wool and needles with him to the Met Gala. The fashion brand Moschino, who dressed him in a detailed vest and patent leather brogues, shared a video of Daley continue to knit while at the event too.

Daley captured everyone’s hearts during the Tokyo Olympics by knitting poolside, making a cosy holder for his first gold medal, an Olympic and Team GB-themed cardigan that he later raffled off to raise money for The Brain Tumour Charity.

He also was spotted knitting a dog sweater during the Women’s Diving final at the Olympics, which he confirmed after sharing the finished piece and saying: “For those asking what I’m making here... I am making a dog jumper for @izzythe.frenchie.”

The diver has a dedicated Instagram page to share his knitting projects, named Made With Love by Tom Daley.

It’s no surprise that Daley would use the Met Gala event, where tickets cost $50,000, to partake in his wholesome hobby when he was doing the same thing at the biggest sporting event of his career.

More like this
'Bridgerton's Regé-Jean Page Is The World’s Most Handsome Man
By Darshita Goyal
Turns Out George Clooney Is A Huge Fan Of This Classic British Game Show
By El Hunt
Jemima Khan Used Her Own Life As Inspo For 'What’s Love Got To Do With It?'
By Darshita Goyal
Gerard Butler Insisted On Adding This Pivotal Scene To 'Plane'
By Catharina Cheung
Get The Very Best Of Bustle/UK
Sign up for Bustle UK's twice-weekly newsletter, featuring the latest must-watch TV, moving personal stories, and expert advice on the hottest viral buys.