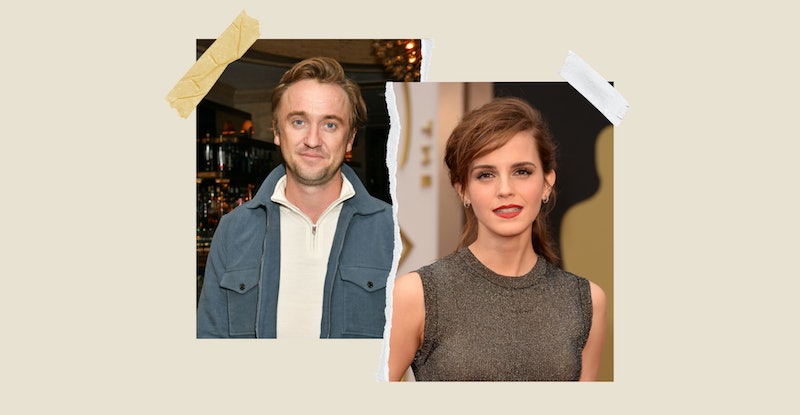 HBO Max’s highly anticipated Harry Potter 20th Anniversary: Return to Hogwarts sees the cast and crew of the beloved films reunite to celebrate the magic of the magical franchise. For many, the one-off special will be a special trip down memory lane, not least the childhood crushes and romances of our youths. Case in point: Tom Felton and Emma Watson, who finally came clean about their love. But don’t get too excited, it isn’t quite what you think...

Yes, the actors admitted that they always “loved each other” in the one-off special, but they also speak openly about how they formed special “kinship” during their time on set. Felton, best known as Draco Malfoy in the iconic films, recalls the very first day he met Emma Watson, who had yet to be cast in the starring role of Hermione Granger.

The two young actors attended auditions for the films at the same time, and Watson, at just 11 years old, was puzzled by the large boom mic over their heads. “This little girl had asked me, what’s that?” shares Felton, who replied in typically Draco Malfoy fashion: “that’s a mic, duh.”

While their characters would largely be enemies during the franchise, residing in their opposing houses of Gryffindor and Slytherin respectively, Watson and Felton would go on to have a lifelong friendship. The two have been subject to plenty of dating rumours as they’ve gotten older, too.

“Emma and I have always loved each other, really,” Felton explains in the special, admitting that he was fully aware that Watson had a bit of “crush” during her time on set. “I think I was in the hair and makeup chair and someone said something along the lines of, ‘she has a crush on you,’” shared Felton, somewhat sheepishly.

Watson, now 31, fully admits to her childhood crush in the reunion special, and even details the very moment she fell in love with Felton. (And yes, it’s as sweet as you’d imagine.)

“I walked into the room where we were having tutoring,” she explains, “the assignment that had been given was to draw what you thought god looked like and Tom had drawn a girl with a backward cap on a skateboard. And I just don’t know how to say it – I just fell in love with him.”

Despite their strong friendship, Watson explains that a romantic relationship was never on the cards for the actors. “He was three years above me and so for him, it was like, ‘you’re like my little sister,’” she says in the clip.

Further shattering any romance rumours, she adds: “I think really, the truth of it, was that Tom was the one who I could often be more vulnerable with. Nothing has ever, ever happened romantically with us we just love each other.”

Felton shared that he was “very protective” over Watson during their time on set and their friendship continues. The actor said: “I always had a soft spot for her and that continues to the day.”