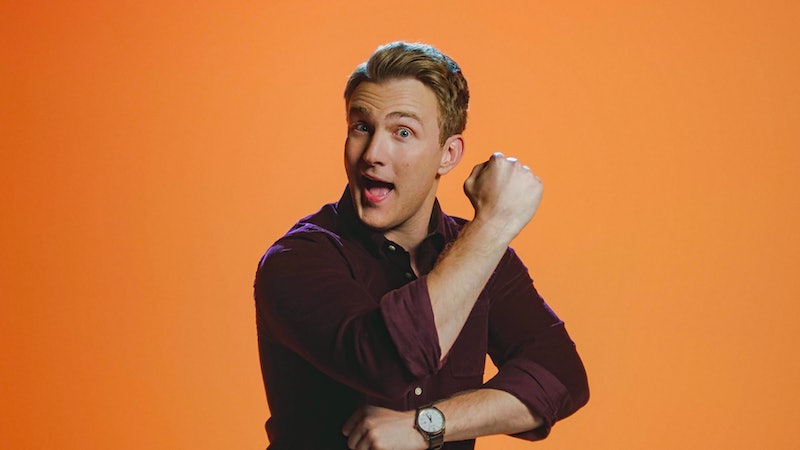 Taking part in The Circle means learning to deal with some pretty unconventional living conditions. Yes, the apartments where The Circle films (in Manchester, England, FYI) look lovely, but each contestant is isolated from their online peers in the same building, making for a truly unique lodging experience.

Fortunately, Tom Houghton from The Circle Season 5 is used to those. As the comedian once told the Cambridge Independent, he’s a self-described “pad brat,” meaning he moved around a lot for his dad’s military job. He also attended boarding school — and even went to therapy for his experience there — before moving into another unusual (but surely much nicer) residence: the Tower of London, the historic palace where Queen Elizabeth II’s crown jewels are kept safe.

How did he score such an address? Here’s everything to know about Tom from The Circle — his job, family, and the hilarious TikTok account where he’s documented it all.

As it turns out, Tom’s dad is Gen. Nick Houghton, a former British army officer and chief of the defence staff. (He was seated front row at Queen Elizabeth II’s funeral, for reference.) Upon his retirement in 2016, he was appointed the tower’s constable. So when Tom needed a place to stay after making a career pivot as a solo comedian, the royal residence was a natural next step.

Tom is a stand-up comedian, and he’ll actually be going on tour in 2023. He also recently released a full stand-up special, The Honourable, on YouTube. He doesn’t downplay his royal connections in his comedy but leans into the bizarreness of it all.

“What I’ve always been told people have enjoyed about my comedy,” Tom told the Independent, “is that I’m from a very unique situation — I live in a palace and I went to an all-boys boarding school and my dad’s a lord — but it’s making the unrelatable, relatable. I think we’re all going through the same emotions — they’re just framed differently.”

Tom recently moved out of the Tower of London, but his hilarious TikToks about day-to-day life in a historic palace will live on. On his account, which has nearly 300,000 followers, Tom has documented how mundane activities — like, say, ordering a pizza or doing the walk of shame — are made much more complicated when living in a royal abode.

On Tom’s TikTok, you will also find clips of his comedy routine and snippets of his everyday life, too.