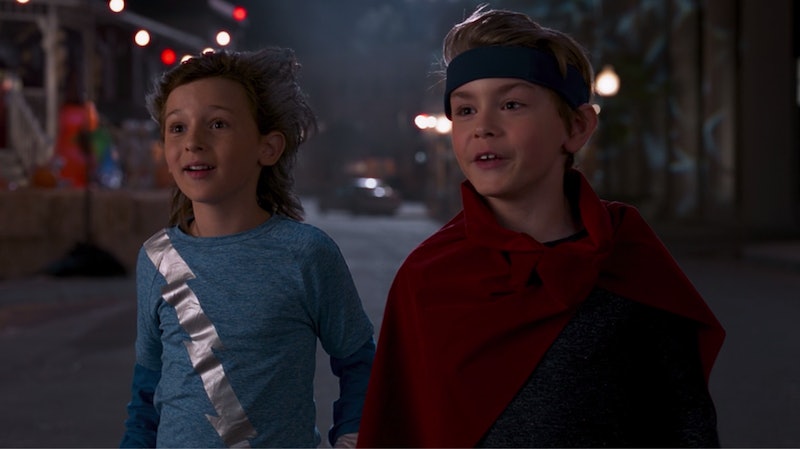 Spoilers ahead for WandaVision Episode 6, "All-New Halloween Spooktacular!" There's plenty to speculate about after the events of WandaVisions's Feb. 12 episode. Is Pietro really who he says he is? What are Hayward's plans for Vision's body? Who is the aerospace engineer Monica Rambeau and Jimmy Woo are going to ask for help? But perhaps the most notable development is that Wanda and Vision's twin sons, Billy and Tommy, finally start exhibiting powers, hinting at the eventual formation of the Marvel comics' Young Avengers hero squad within the MCU.

Though this isn't the first time that Billy and Tommy have shown some kind of magical abilities in WandaVision (who could forget their unsettlingly rapid aging?), it is the first time they've exhibited powers analogous to their superpowered identities as Wiccan and Speed in the Marvel comics. Tommy appears to have gotten the power of superspeed like his Uncle Pietro, while Billy's vision of his father towards the end of the episode suggests that his magical abilities are more similar to Wanda's telepathy and telekinesis. On top of the powers the twins have already manifested on the show, in the comics Speed is also able to vibrate himself at speeds that allow him to pass through walls and other solid objects, and Wiccan can alter reality itself (similar to Wanda) and use his powers to teleport.

In the comics, Wanda (accidentally) creates Billy and Tommy from fragments of the demon Mephisto, which eventually leads to them being reabsorbed by Mephisto. However, the twins return in later comics after being reincarnated as the superpowered children of normal humans — it turns out that Mephisto wasn't entirely successful in reabsorbing their souls, which allowed for them to be "reborn." It's these versions of Billy and Tommy that eventually become Wiccan and Speed. However, as WandaVision has already done plenty to expand and alter the comics' plotlines, it's certainly possible that the versions of Wanda's twins in the series are the ones who will take up their superhero mantles on the Young Avengers team.

In fact, the MCU has actually already begun setting the stage to assemble the Young Avengers squad. Despite her roles in prior Ant-Man movies, Ant-Man/Scott Lang's now-teenage daughter Cassie Lang was recast for her appearance in the 2022 movie Ant-Man and the Wasp: Quantumania, suggesting that she may soon be stepping into her role as Stature/Stinger within the Young Avengers.

On top of that, Hailee Steinfeld is set to appear in the 2021 Hawkeye Disney+ series as Kate Bishop, a young vigilante who Clint Barton takes under his wing and trains to be a sharpshooter. Xochitl Gomez has also been confirmed to play the interdimensional-portral-creating America Chavez in the upcoming MCU movie Doctor Strange in the Multiverse of Madness, and the MCU has cast Dominique Thorne as Riri Williams in an eventual Ironheart Disney+ series that will see her taking up the helm of Iron Man from the now-deceased Tony Stark.

It might be a few years before we see an actual Young Avengers project, but looking at the rest of MCU's Phase 4, it's clear that the Marvel universe has something special in store for its new generation of heroes.

More like this
Wait, Is Barney Stinson Related To Sophie On 'HIMYF'?
By Gretchen Smail
Everything To Know About 'And Just Like That...' Season 2
By Jack Irvin and Grace Wehniainen
6 'Happy Valley' Easter Eggs You May Have Missed
By Sophie McEvoy
Claire Foy Spoke Out About 'The Crown's Gender Pay Gap
By Sam Ramsden
Get Even More From Bustle — Sign Up For The Newsletter
From hair trends to relationship advice, our daily newsletter has everything you need to sound like a person who’s on TikTok, even if you aren’t.