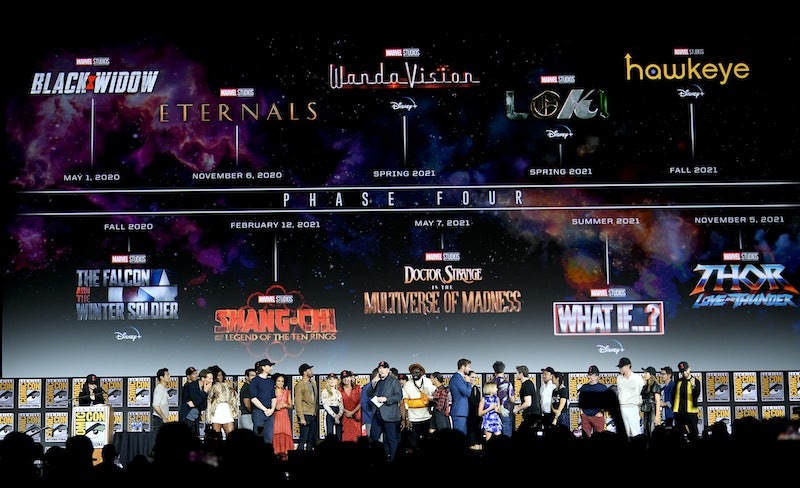 The Marvel universe is ever-expanding. On Saturday, Marvel revealed its highly-anticipated Phase 4 plan at San Diego Comic-Con, as reported by Rolling Stone. The announcement teased a whole new batch of superheroes, the return of favorite characters, upcoming television series, and other collaborations.

Fans were treated to a look ahead at some of the studio's new franchises, including a brand new movie for The Eternals and an exciting reboot of Blade. The crowd also got to hear further details about returning heroes, including Black Widow (the standalone movie is officially confirmed!) and Thor (Natalie Portman's picking up the hammer!). Marvel didn't hold back over the course of SDCC weekend, letting viewers in on news about directors, casting, release dates, and more.

Among the announcements was an update on Disney+, the studio's streaming service. Disney+ will feature several new short-form series, including a Thor spin-off called Loki in Spring of 2021, as per Rolling Stone. The platform will also premiere The Falcon and the Winter Soldier, Jeremy Renner's Hawkeye, and an animated show called What If? based on the speculative comic book series with the same title. The Disney+ series will mark a new era for Marvel, but movie lovers will have plenty to look forward to over the next couple of years as well. The production company will bring new comic books to film for the first time and return with the next installment of the most beloved franchises.

Find everything you need to know about the studio's new and returning projects as part of the Marvel Phase 4 plan below.

After several years of rumors, Marvel confirmed an adaptation of Jack Kirby's The Eternals, according to The AV Club. Director Chloé Zhao will helm the film, and Angelina Jolie will star as Thena, a young and reckless fighter, with Game of Thrones' Richard Madden playing Ikaris, and Salma Hayek as Ajak. The rest of the cast included familiar and exciting faces as well, including Bryan Tyree Henry of Atlanta as Phastos and Kumail Nanjiani as Kingo, Also notably, Lauren Ridloff will play Makkari, the first deaf superhero in the Marvel universe.

The role of Eternals villain Gilgamesh will be taken on by Korean actor Ma Dong-seok, and the movie will be his North American debut, as per AV Club. In the comics, The Deviants were the main villain, but the director hinted at a slight change from the reference material for the film. Eternals is set to premiere in November of 2020.

A few of the Avengers are returning for projects over the next couple of years, including Black Widow, who will get her first standalone movie, as per Rolling Stone. The film will be the first of the Phase 4 films to premiere, and Scarlett Johansson will reprise her role as the former Russian agent. Among the cast members are David Harbour, Rachel Weisz, and Midsommar star Florence Pugh. The first footage of Black Widow debuted at SDCC, showing an intense fight scene between the title character and Pugh, according to Deadline. The movie will be directed by Australian filmmaker Cate Shortland, and it's set to premiere on May 1, 2020.

Shang-Chi and the Legend of the Ten Rings (February 2021)

Marvel's martial arts superhero Shang-Chi is finally getting a film of his own, and Canadian-Chinese actor Simu Liu will star in Shang-Chi and the Legend of the Ten Rings, according to Gizmodo. The Kim's Convenience actor was just cast in the film this week. Notable Hong Kong actor Tony Leung is signed on to play the film's antagonist The Mandarin, and Awkwafina has a yet-to-be revealed role in the movie was well. The movie will premiere February 12, 2021.

Doctor Strange in the Multiverse of Madness (2021)

Yes, there will be a sequel to Dr. Strange's origin story, Doctor Strange, which premiered in 2016. Doctor Strange in the Multiverse of Madness will bring back Benedict Cumberbatch as the title character as well as director Scott Derrickson, according to Deadline. Elizabeth Olsen is signed on to appear in the film as her Avengers: Endgame character Scarlet Witch.

The fourth installment of Thor will also hit theaters as part of Marvel's Phase 4. Thor: Love and Thunder will bring back director Taika Waititi, as well as stars Chris Hemsworth and Tessa Thompson. One major surprise unveiled over the weekend is that Natalie Portman will reprise her role of Jane Foster from the first two Thor films. The team is keeping details under wraps about the movie, but in the comic book, Portman's character becomes Thor after the God of Thunder can no longer use his iconic hammer. The movie is set to premiere on November 5, 2021.

The project does not yet have a release date, but Mahershala Ali will star in a Blade reboot. The actor, who personally advocated for the project, announced the news to SDCC crowds on Saturday. Blade is a half-vampire, half-human who hunts the undead, and the two-time Oscar winner will bring the character back to screen for the first time since 2004. Actor Wesley Snipes originally starred as Blade in 1998.

Marvel universe fans certainly have plenty to be excited about with the studio rolling out what may be its most thrilling roster of projects to date.