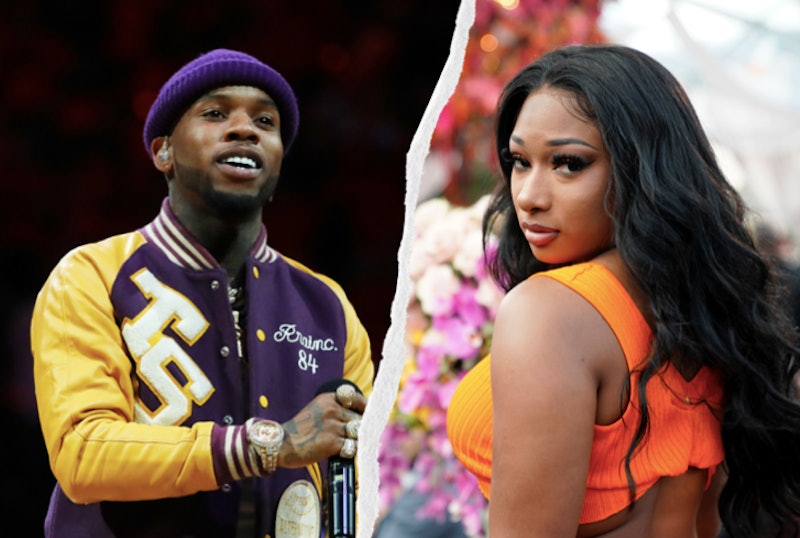 About three months after the incident in Los Angeles, rapper Tory Lanez has been charged in the Megan Thee Stallion shooting, according to multiple reports. Lanez, real name Daystar Peterson, has been charged with one count of assault with a semiautomatic firearm and one count of carrying a loaded and concealed firearm on Thursday, Oct. 8, per the Los Angeles County District Attorney's Office. Meg, whose real name is Megan Pete, is identified as “Megan P” in the complaint. Bustle has reached out to representatives for both Lanez and Meg, but did not receive any immediate responses.

Per the complain, prosecutors allege that Lanez got into an argument with Meg while driving around the Hollywood Hills area of Los Angeles on July 12, culminating in the rapper shooting Meg multiple times in her feet as she tried to exit the vehicle. An arraignment is scheduled for Tuesday, Oct. 13, according to CNN, and Lanez could face a maximum of 22 years and eight months behind bars if convicted for all charges.

Reports of what happened between Lanez and Meg were vague at first. TMZ initially reported in July that the rapper had cut her foot on some glass during the altercation, but Meg confirmed soon after that she had been shot, revealing in an Instagram post on July 15 that she was recovering from surgery. "I suffered gunshot wounds, as a result of a crime that was committed against me and done with the intention to physically harm me," she wrote at the time.

It wasn't until August that the “WAP” rapper publicly accused Lanez of shooting her, recounting the incident in an Instagram live and accusing Lanez of lying to the press. "You shot me, and you got your publicist and your people to [talk to] these blogs, lying and sh*t," the rapper claimed in the video. "Stop lying."

In her video, Meg explained that she was initially hesitant to name Lanez as her shooter in light of the Black Lives Matter protests sparked by police brutality. "All this sh*t going on with the police — the police was literally killing Black people for no motherf*cking reason," she said. "You think I’m about to tell the police that us Black people got a gun in the car? You want me to tell laws that we got a gun in the car so they can shoot all of us up?"

More like this
Jay-Z Is Performing At The Grammys, Meaning Beyoncé Might Actually Show Up
By Jake Viswanath
Adele Is Attending The 2023 Grammys, Thank You Very Much
By Jake Viswanath
Taylor Swift May Miss The 2023 Grammys For Reasons Fans Know “All Too Well”
By Jake Viswanath
Taylor Lautner Thought Taylor Swift's 2009 VMAs Interruption Was A "Skit"
By Alyssa Lapid
Get Even More From Bustle — Sign Up For The Newsletter
From hair trends to relationship advice, our daily newsletter has everything you need to sound like a person who’s on TikTok, even if you aren’t.