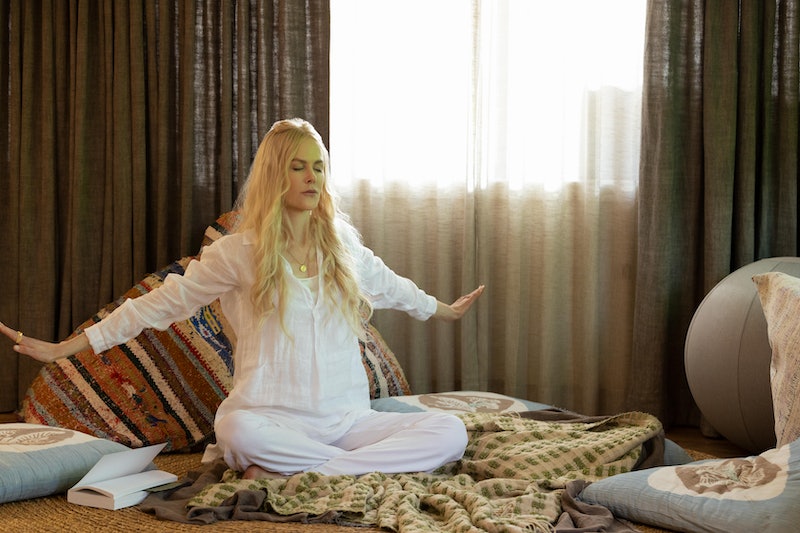 Hot stone massages. Candlelit yoga. Morning meditation. These are the typical images a wellness resort brings to mind. But they are not necessarily the ones you’ll find at Tranquillum, the resort at the center of Hulu’s new miniseries Nine Perfect Strangers. Though guests arrive expecting a relaxing getaway, what they receive is a hardcore program its enigmatic founder Masha (Nicole Kidman) vows will transform their lives. Unsurprisingly, the experience turns out to be more than they bargained for.

Nine Perfect Strangers is adapted from Liane Moriarty’s 2018 novel of the same name. Though Tranquillum itself is not based on any specific resort, it hits on trends popular at many wellness destinations. It has gorgeous scenery akin to Big Sur’s Esalen Institute and the same dedication to raw organic foods as Fivelements in Bali. Tranquillum takes wellness to an extreme with a strict regimen that includes all-day fasting, sweat lodges, and micro-dosing guests with various drugs. But for better or for worse, there are also several examples of these practices in real life.

Wellness tourism is a billion dollar industry that attracts people from around the world. As popularity in the industry has surged, the lines between wellness practices and medical treatments such as blood testing and micro-dosing have blurred. And without doctors and medical professionals on hand, these treatments carry an inherent risk.

In 2009, 18 people were hospitalized and three died following a sweat lodge ceremony near Sedona, resulting in criminal charges against the self-help author leading the retreat. Folks from all over Europe flock to Chenot Palace in Azerbaijan for its programs, many of which involve detoxifying diets, blood analysis, and ozone therapy — a controversial treatment that has been prohibited by the U.S. Food and Drug Administration since 2016 because “ozone is a toxic gas with no known useful medical application.” Arguably, the most egregious ethical issue that takes place at Tranquillum is that Masha and her staff begin to administer micro-doses of psilocybin — the psychedelic chemical compound found in mushrooms — to the guests without their knowledge.

Psilocybin has been the subject of a lot of medical research, much of which suggests that it could help people experiencing anxiety, depression, or suicidal thoughts. Though still illegal in the U.S., there is a growing movement to legalize psilocybin as more and more clinical trials have detailed the long-term benefits of the psychedelic. Retreats like The Buena Vida Psilocybin Retreats in Mexico and Holland’s Synthesis describe themselves as legal, professionally guided retreats offering personal growth, emotional breakthroughs, and spiritual development through the use of psilocybin. Even Gwyneth Paltrow's Netflix show, The Goop Lab, highlighted a psilocybin retreat in Jamaica.

However, since psilocybin is still illegal and unregulated in places like the U.S., Canada, and most of Europe, it can lead to questionable practices. For instance, the popular Jamaican-based psychedelic retreat company MycoMeditations was recently scrutinized for the lack of licensed therapists and nurses on staff as well as having no access to medical facilities in case of emergency. These 10-day trips cost between $5,000 to $10,000, and their founder and main facilitator, Eric Osborne, often does the drugs himself as he facilitates the group ceremonies (according to Insider, this has made past guests and even guest facilitators extremely uncomfortable, though Osborne contends it makes him better at his job). This is profoundly different from psilocybin clinical trials, in which facilitators are trained extensively and shadow other facilitators beforehand to ensure each session is safe and supported by a full medical staff.

Ultimately, Nine Perfect Strangers is fictional. But the wellness practices Masha swears by are used in real retreats and have real consequences. Human bodies have limits and cannot withstand hours in a sweat lodge or exposure to toxic gas, especially with no emergency services nearby. Certainly, secretly drugging a group of already traumatized strangers will end badly.