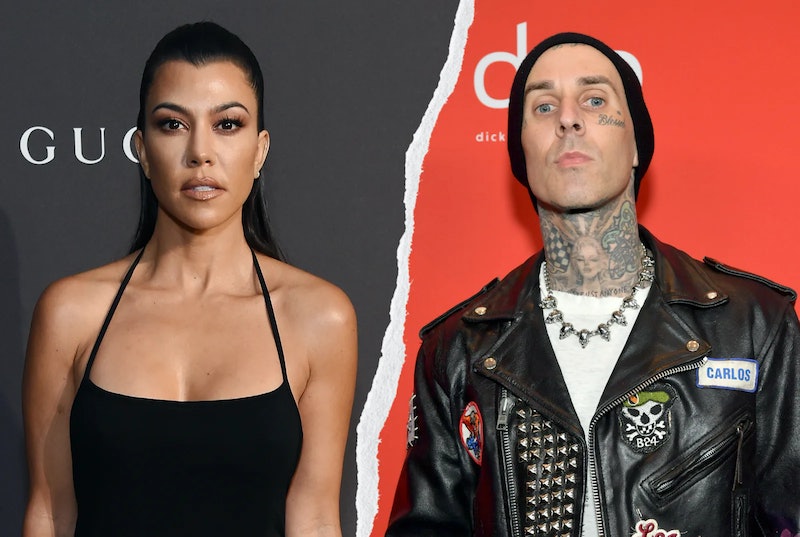 Travis Barker is slowly but surely opening up about his relationship with Kourtney Kardashian. On Thursday, March 4, the drummer appeared on The Drew Barrymore Show, where he was asked about a sweet love letter he received from the reality star herself. "To lots of fun adventures," the note read. "May we destroy each other completely. Love, Kourtney."

While chatting about the "hot" love letter, which Barker recently shared on his Instagram Stories, Barrymore revealed that her notes tend to be a bit different. "My love note would be like, 'Can we get to bed early and watch a movie?'" she joked. But Barker said that the 41-year-old Poosh founder's note was more his style. "I would prefer the opposite," he said. "I would prefer to, kind of, go in the blaze of glory and ball of flames."

Apart from the note itself, Barrymore inquired about the 45-year-old musician's relationship history and asked if he prefers dating women who have children over women who don't. "I've done both up until now," he revealed. "I dated girls who didn't have kids, and I find it hard because they would have trouble understanding like, 'Why don't you want to go to dinner every night with me?' or 'Why don't you want to see me every night?'"

Fortunately, that's not an issue in his current relationship because Kardashian knows firsthand what it's like to be a parent of three, just like Barker. "Now I'm spending time with a woman who's a great mom, who's a great friend, and you don't have to worry about any of those things," he said. "It just comes natural, it's like a maturity thing. And I also really like missing someone and cherishing the time that I spend with them instead of every day being with them, especially in the beginning of the relationship. I think missing someone is so important."

People first reported that Kardashian and Barker are a couple on Jan. 24. "They're in Palm Springs together. They've been dating for about a month or two," a source told the magazine at the time. "They've been friends for a long time but it's turned romantic." Entertainment Tonight's source echoed that sentiment: "Things are super easy between them because they know each other so well and just click and get one another. Her kids and his kids get along so well too, which is a major plus for both of them."

On Feb. 17, Kourtney officially confirmed the relationship herself with a photo of the pair holding hands on Instagram. Barker, for his part, reposted the photo to his Story and dropped a heart emoji in the comments. Clearly, things are heating up between these two — and Barker's latest comments are more proof.