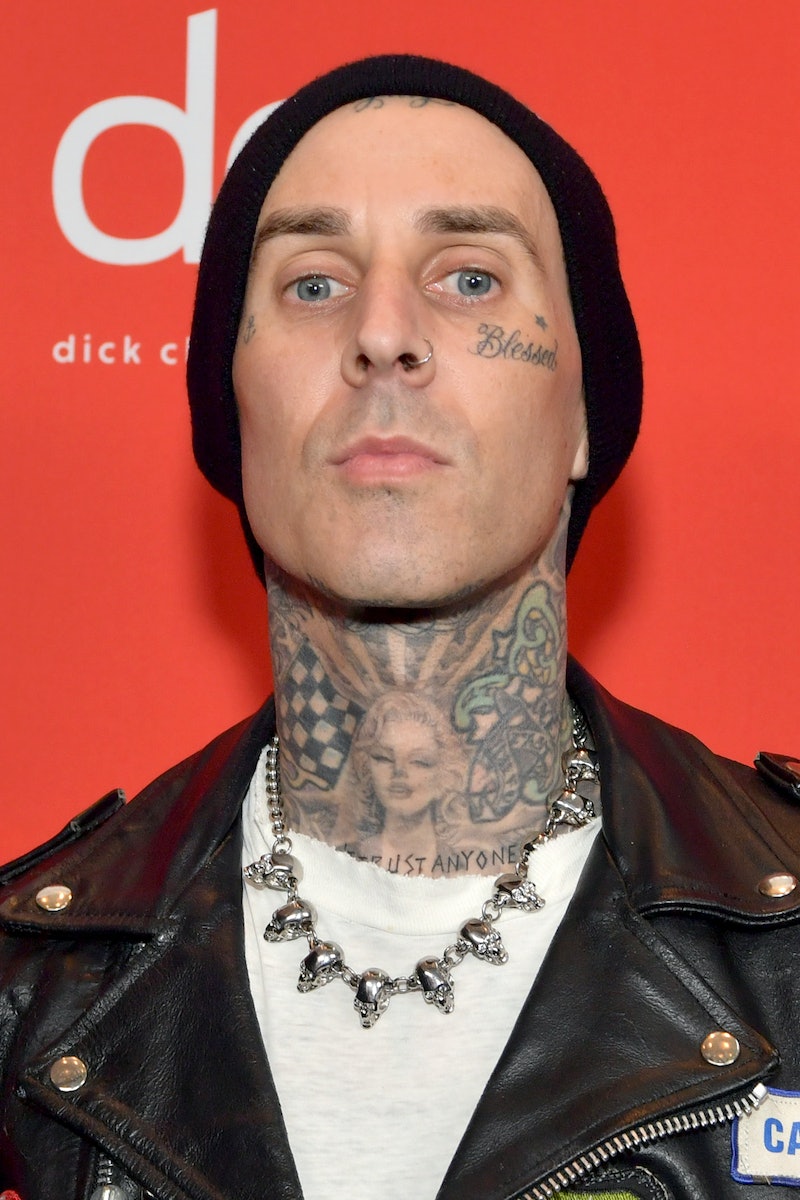 Well, cue the eyes emoji. On Saturday, May 29, Travis Barker liked a comment about joining Kourtney Kardashian for an “awkward” double date with Scott Disick and Amelia Gray Hamlin. Kardashian — who was previously in an on-again, off-again relationship with Disick for about a decade and shares three kids with her fellow reality TV star — has been very publicly dating Barker in recent months, while her ex is now dating Hamlin.

The drama began on Friday, May 28, when the gossip account Deuxmoi shared a rumor that Kardashian, Barker, Disick, and Hamlin were spotted having dinner at Nobu in Malibu. The Instagram account @kardashianvideo reposted the unverified report, asking fans, “Do you think this is true?” One commenter found the dinner baffling, writing, “It’s so odd to me like what does a 2001 baby have to do [with] these grown-*ss people i know that dinner was awkward as hell.” Barker reportedly liked the comment, suggesting that he is among those confused by Disick’s relationship, whether or not the dinner in question did occur.

Disick’s relationship with Hamlin, a 19-year-old model, has caused controversy because of their age gap. The reality star, who is 38, also previously dated Sofia Richie, who just so happened to be 19 at the time. The couple is going strong, though. Hamlin, the daughter of Real Housewives of Beverly Hills star Lisa Rinna and actor Harry Hamlin, recently posted about Disick for his birthday on Instagram. “I can’t imagine what i would do without you,” she wrote in the caption, in part. “Thank you for being you.”

The exchange isn’t the first hint of messiness between the two couples. In April, an anonymous source told People that Disick “was pretty shocked” to find out about Barker and Kardashian’s romance. The source also reported that Disick “has struggled” to accept her relationships in the past. “With Travis, he is struggling even more,” the source added. “Before Travis, Kourtney’s relationships were never serious. It was more like flings. With Travis, it’s different.”

Kardashian and Barker, who were longtime friends before they began dating, have shared plenty of relationship updates on Instagram since confirming their romance in February. Last week, the Poosh founder shared photos with Barker at Disneyland, holding hands on a carousel and in front of the Magic Kingdom castle. Barker commented on the post, “Love you.” Previously, on April 18, Barker posted a birthday tribute to Kardashian, writing, “I F*CKING LOVE YOU! YOU’RE A BLESSING TO THIS WORLD HAPPY BIRTHDAY.” Earlier that month, the Blink-182 drummer also got a tattoo of his love’s name on his chest, with the permanent tribute suggesting the couple is in it for the long haul.

More like this
RHOP’s Robyn Dixon Explained Why Juan Paid For Another Woman's Hotel Room
By Brad Witter
Joey Essex Is Rumoured To Be Dating A 'Love Island' Favourite
By Sam Ramsden
10 Photos Of The Wildest Limo Arrivals From 'The Bachelor' Premiere
By Brad Witter
Molly-Mae & Tommy Fury Revealed Their Baby Girl's "Really Unusual" Name
By Sophie McEvoy and Sam Ramsden
Get Even More From Bustle — Sign Up For The Newsletter
From hair trends to relationship advice, our daily newsletter has everything you need to sound like a person who’s on TikTok, even if you aren’t.