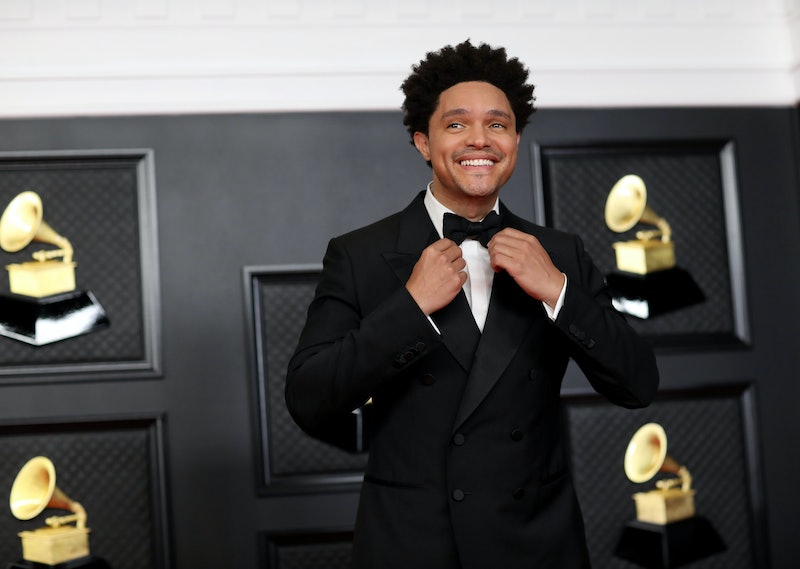 The 2021 Grammys are here, and according to host Trevor Noah, it’s the biggest event of 2021... aside from the Capitol riots. "Tonight's going to be the biggest outdoor event of the year ... besides the storming of the Capitol,” Noah said during his Grammy monologue on Sunday, referencing the Trump supporters who broke into the Capitol building on Jan. 6, 2021 as the Senate was confirming President Joe Biden’s victory in the 2020 presidential election.

Luckily, the Grammys ran much more smoothly. Noah used his monologue to explain how the ceremony was being held during the coronavirus pandemic, taking viewers on a tour of the entire venue from the outdoor stage where awards were being presented to the indoor room where four stages were set up in a circle all facing each other for performers. “Tonight’s about bringing us all together as only music can,” he said. “I mean — music and vaccines.”

Noah went on to promise that the Grammys would be “full of joy, new beginnings, and coming together” while still acknowledging “what happened in 2020.” Of course, because he is a comedian first, the Daily Show host couldn’t help but throw in a few jabs at the celebrities in attendance. "This is going to be the rare awards show where the white swabs going up people’s noses will be cotton swabs," he joked.

For the most part, performances took place on the four socially distant stages, with fellow artists serving as the audience members. As a result, this year’s Grammys were a much more intimate affair. "What I'm really excited for is seeing which artists are fans of the other artists,” Noah told Entertainment Tonight ahead of the ceremony. “Because of how we're doing the show, everyone's watching everyone else perform, so it's almost like they're performing for each other, and for everybody at home, which is a really cool dynamic."

However, the host also warned viewers that this set-up could lead to some unexpectedly uncomfortable situations...like Taylor Swift running into fellow performers (and her exes) Harry Styles and John Mayer. “Right now there is more tension in that tent than at a family reunion at Buckingham Palace,” he joked.