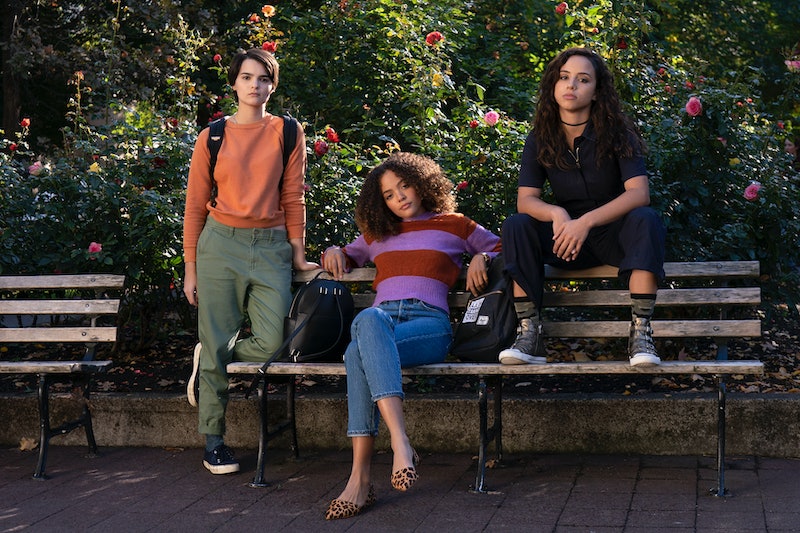 Everything that happened before March of this year feels like it was a million years ago, including the Trinkets premiere last summer. Which is why you might need a Trinkets Season 1 recap before you start watching Season 2. The show picks up right where things left off.

"We thought it would be really exciting for people to be put squarely in the shoes of our trio right on the heels of all the drama that just happened, so we just jump right back in," series creator Kirsten "Kiwi" Smith told Hollywood Life of Season 2.

In the first season, Portland teenagers Elodie, Tabitha, and Moe meet at a Shoplifters Anonymous group and quickly bond over their special set of illegal skills. But what starts as stealing small items from boutiques escalates into a pretty serious crime by the finale. Here's what you need to remember before diving back into the drama.

Elodie is the new girl at school, having recently relocated to Portland after her mother's untimely death. She now lives with her dad, stepmom, and younger stepbrother, and she doesn't feel like she belongs. She's still reeling from the loss of her mother, who died in a car accident that Elodie blames herself for. She'd asked her mom to pick her up that fateful night, and they were later hit by a drunk driver. To cope, Elodie steals, and she has a suitcase full of her stolen items hidden under her bed.

Tabitha is the It girl in school who's dating the equally popular Brady. Her mom, Lori, is obsessed with appearances and puts a lot of pressure on her daughter to be perfect, leading her to miss the signs that Brady is abusing Tabitha and that she's deeply unhappy. Meanwhile, Tabitha learns that her dad is cheating on her mom.

In order to deal with it all, Tabitha runs a secret Instagram account where she can express her true self. She posts whenever she's feeling particularly trapped and upset.

Moe dresses and acts the part of a burnout loser, but she's actually really smart. Her home life, however, is a little rockier: her dad is in prison, while her single mom is so busy supporting their family that she's almost never home. As a result, Moe feels pretty isolated and alone most of the time. Midway through Season 1, she learns that her father is out of prison, but their attempt to reconnect goes poorly when he never shows up to meet with her.

Moe is also keeping a lot of secrets. She hides that she's super smart, she hides that she has an on-again, off-again thing with Noah, and she lies about why she's in Shoplifters Anonymous. She later reveals to Elodie and Tabitha that she doesn't even steal. She took the blame for a crime that her brother's friend committed because she was a minor and knew she would get a lesser punishment — in this case, having to go to SA.

Though she initially judged the other people in the group, Moe kept going because it helped her feel less lonely. When Elodie and Tabitha find out Moe lied, they're understandably upset, but she partially wins their forgiveness with an impassioned speech about the truth during an SA meeting. When Elodie's little brother slips away while she's watching him, the three girls finally reunite to help find him.

Moe, Elodie, and Tabitha all have relationship problems throughout the series. Elodie lies about having a girlfriend named Zoey back home but later reveals she's a virgin and was rejected by Zoey when she tried to make a move. Later, Elodie meets the much more experienced singer Sabine and falls for her cool girl persona. But Sabine's ex Luca warns that Sabine can be toxic; she loves attention more than she could love any one person. We see signs of that early on in Elodie and Sabine's relationship when Sabine forces Elodie to steal sunglasses for her and also asks Elodie to follow her on tour — despite the fact that Elodie is still in high school. She even causes Elodie to miss an important legal appointment regarding her mom's death. (Elodie is supposed to give a deposition about the accident. She initially can't bring herself to go through with it, but eventually agrees to do so.)

Tabitha, meanwhile, continues to stay in a relationship with Brady while developing a crush on Luca, the older bartender at a local club. Brady, who is terrible in every way, buys Tabitha a fancy smart watch for her birthday even though he knows she always wears her beloved grandfather's old watch. (This becomes important later.) At her birthday party, Tabitha is struggling with knowing about her father's affair, her mother's obsession with making everything look good from the outside, and her relationship, so she starts drinking copiously. This leads to a scary argument with Brady during which she eventually breaks things off. To punish her, he hacks into her Instagram and shares a revealing photo of her.

After their breakup, Tabitha seeks out Luca, who is glad to hear that she's finally single. They spend time together moving Luca into his new apartment and making out. But when Tabitha's mom hears that she and Brady have broken up, she tries to force them back together by inviting Brady over to surprise Tabitha. Tabitha is livid and kicks Brady out. That's when she drops the bomb that her dad is having an affair. Initially, her mom breaks up with her dad, but they reconcile shortly afterward, which upsets Tabitha.

Meanwhile, Moe is secretly dating Noah. She gets jealous when she sees him hanging out with other girls — especially his ex Kayla — but doesn't want to make their relationship public, either. Noah tells her she can't have it both ways, and after taking drugs at a party at Sabine's house, Moe leaves him a voicemail revealing her true feelings for him. When they see each other next, Noah says he reconnected with Kayla before listening to her voicemail. Moe is devastated and breaks things off for good. But "for good" doesn't last long: Noah wins her back by telling her (in Korean) that he loves her and will wait for her to get back from the STEM research program she got into in Korea.

The girls mostly steal small things, but an incident at the end of the season puts them at risk of being charged with a big felony. It all starts after Brady and Tabitha's breakup, when Tabitha tells her friends that her grandfather's watch is still in Brady's car and he won't give it back to her. So, Tabitha steals Brady's keys from his locker and the three break into the car to steal the watch back. Once in the care, they decide to take it for a spin and end up getting into a small accident. Tabitha freaks out, explaining that Brady first became aggressive with her when she spilled coffee in his car. Her friends are so upset that they help her sink the car into the lake as vengeance.

Except when Brady's car is later found, he knows instantly that it was Tabitha who took it because the only thing missing was her grandfather's watch. He tells her that if she gets back together with him, he won't go to the police. Refusing to allow Tabitha to go back to her abuser, Elodie says it was her who took the car, and Moe punches him. Moe gets suspended for hitting Brady and loses her STEM spot. It turns out that Elodie also kept the car keys along with the other stolen items in her suitcase, which comes back to bit her when...

Where The Show Leaves Off

Elodie's dad finds her stash of stolen items — including the car keys — and tells her that he's sending her to a facility to get help. Elodie freaks out and calls her friends to rescue her. They sneak Elodie out of the house, and Elodie decides to run off and join Sabine on tour. Meanwhile, Moe is so deflated after losing her STEM spot that she starts to shoplift for real. And when Tabitha refuses to let Brady into her home, he dials the police — presumably to tell them about who he thinks stole his car.

Needless to say, Elodie, Tabitha, and Moe will have quite the predicament to get themselves out of when Season 2 picks up.