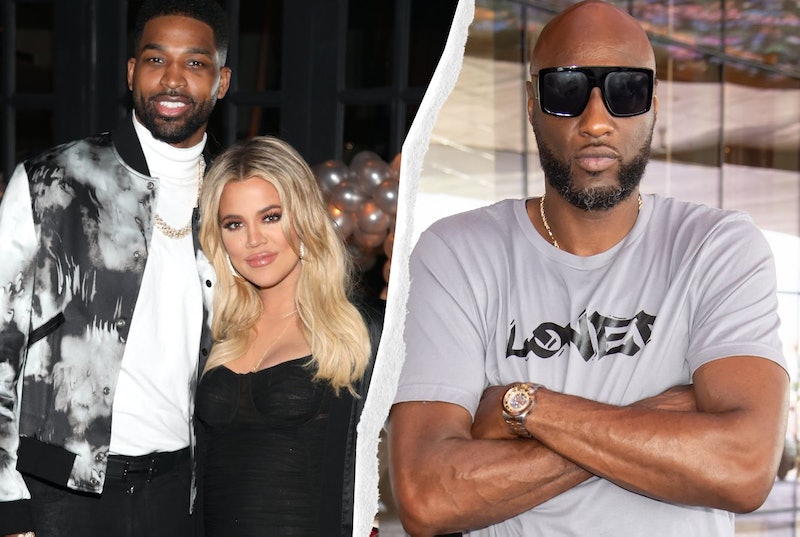 In a true battle of the exes, Tristan Thompson went after Lamar Odom in the comments section of Khloé Kardashian’s Instagram post on Friday, July 9. The drama began after Odom commented, “Hottie” (along with several fire and heart emojis), on a photo of the bikini-clad Keeping Up with the Kardashians alum rinsing off under an outdoor beach shower. Then, Thompson chimed in with his own emojis — hearts and drooling faces — before apparently noticing the comment Kardashian’s ex-husband left.

“God brought you back the first time. Play if you want, different results,” Thompson wrote, seemingly referencing Odom’s near-fatal overdose in 2015. (Kardashian and Odom have not yet responded.)

What’s perhaps more perplexing is that Thompson and Kardashian once again ended their on-and-off relationship in June amid a new round of infidelity rumors involving the NBA star, according to multiple reports. “They had been working through the cheating rumors for the last couple of weeks, but Khloé told Tristan he lost all of her trust and the relationship could not be repaired,” a source told E! News of the parents to 3-year-old True. “Khloé really tried, but ultimately, felt too betrayed by him. She’s done and says she will not go back.”

Even so, Thompson is reportedly “still trying to get Khloé back,” according to People’s insider, who added that he “hasn’t given up and he doesn’t think the door is closed.” That could explain why this wasn’t the first flirty comment he’s recently left on one of Kardashian’s Instagram posts. On July 6, for example, Thompson posted several heart-eye emojis under a photo of Kardashian strolling on the beach in a sheer blue bodycon dress.

Despite their ups and downs, the exes are apparently still on good terms. “For now, Khloé is single and seems OK with it,” an insider also told People. “She continues to co-parent with Tristan and they spend time together as a family. Even though he has disappointed Khloé so many times, she is still very loyal to Tristan. ... It’s very possible that they will get back together eventually.”

As far as Odom is concerned, Kardashian revealed on the June Keeping Up with the Kardashians reunion that they’re “not in touch,” though she wishes “nothing but the best” for her ex-husband. She also explained that Odom admitting he mistreated her gave a sense of “validation” she’d been needing. “Our marriage ended in a way that there was not a lot of closure on my end and I assume on his,” she said during the E! special. “When you get out of a marriage where you’re not really able to have a discussion with someone, I feel like it’s hard for you to move on, you feel always incomplete or you’re always questioning things.”

Odom, for his part, thanked Kardashian and her famous family on social media while marathoning KUWTK in March: “It’s crazy how time flies. I want to give a shout out to E!, for giving me the opportunity, a shout-out to my ex-wife, [and] to Kris Jenner [and] Kim, for giving me the opportunity to cross over. I’ll never forget the day I got married on TV. I get a little emotional watching it.”

Apparently both his and Thompson’s minds are still very much on their mutual ex.