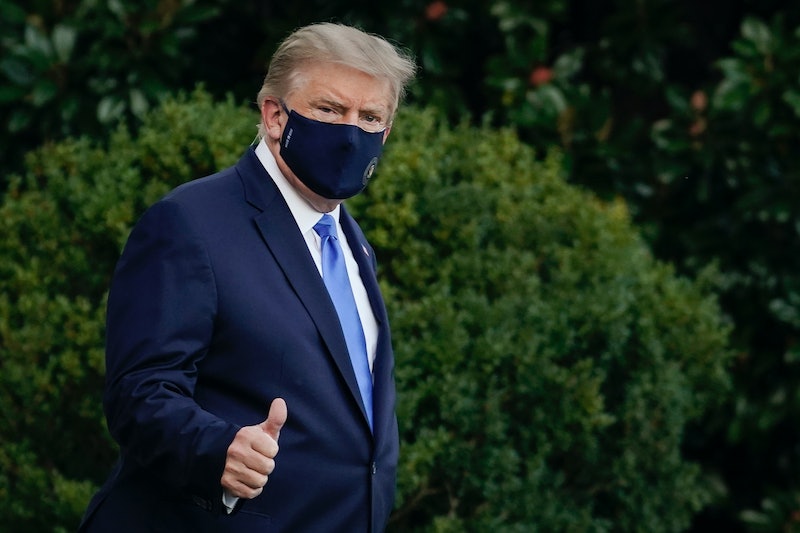 In an early Friday morning tweet, Donald Trump announced he and Melania Trump had tested positive for COVID-19, the disease caused by the novel coronavirus, and would begin their "quarantine and recovery process immediately." Meanwhile, in her own post, FLOTUS confirmed that "as too many Americans have done this year," she and the president would be quarantining in the White House. Later that same day, her husband was hospitalized at Walter Reed National Military Medical Center as a precaution. As the news unfolded, celebrity reactions to Trump's COVID-19 diagnosis ranged from sincere to snarky.

In a show of the importance of unity, politicians, including former President Barack Obama, as well as Trump's 2020 Democratic challenger, Joe Biden, and his running mate, Kamala Harris, were among those who extended their well wishes. "Michelle and I hope that the President, First Lady, and all those affected by the coronavirus around the country are getting the care they need and are on the path to a speedy recovery," Obama tweeted on Oct. 2, reminding Americans that, despite the "big political battle right now ... we want everyone to be healthy, no matter our party." Biden and Harris also shared warm messages, announcing both they and their spouses had tested negative for coronavirus.

Striking a similar tone, supporters, such as Kanye West (who noted a "crying need for civility across the board"), and critics, including Alyssa Milano and Rachel Maddow, sent messages of support. "As someone who has had #COVID19 and still suffers from post-covid syndrome, I can honestly say with all that I am that I wouldn’t wish this virus on my worst enemy," Milano tweeted, in part, on Oct. 2, urging her followers to "please wear a mask."

In fact, Trump's uneven stance on wearing masks — and admitted downplaying of COVID-19 — were the things that seemed to be most on Hollywood's minds. While Top Chef host Padma Lakshmi cited POTUS' mocking of Biden's use of masks at the first presidential debate on Sept. 29, others, like Judd Apatow pointed to his larger criticism. Meanwhile, actor Sophia Bush, noting her genuine wish for his recovery, had a more pointed response: "Is it still a 'Democrat hoax?' Are you still going to mock people for wearing masks? Are you sorry for lying to the American people for months? I ask these b/c I assume you’ll get the best taxpayer funded gov’t healthcare avail + genuinely hope you recover. But you owe us answers."

Filmmaker Ava DuVernay and actors Mark Hamill and George Takei were among the celebrities that expressed their wish that the diagnosis would be a teachable moment for Trump and other politicians, moving forward.

Others, such as Insecure's Issa Rae and Emmy winner Lena Waithe let GIFs do the talking for them.

Naturally, other stars used the moment to make jokes. For her part, rapper Cardi B promoted her new single, "Bet You Wanna," with K-pop group Blackpink, poking fun at Trump's habit of not wearing a mask. Comedians, including Whitney Cummings and Kathy Griffin, also targeted the first lady.

Despite the president's health issues, several Twitter users still stressed the importance of voting Trump out in November. Pod Save America's Jon Favreau wrote that he hopes Trump "gets well soon so that we can all vote him out of office by a massive margin."

For those criticizing celebs' so-called flippant reactions, Bill Eichner referenced Republicans' response to Ruther Bader Ginsburg's death: "Republicans announced they were replacing RBG 1 hour after it was announced she DIED. I wouldn’t worry so much about being 'nice.'"

Although they didn't miss an opportunity to point to the irony of Trump's COVID-19 diagnosis, most stars do seem to be pulling for a full recovery.

More like this
Camilla Paid Tribute To The Queen In A Heartfelt Video Message
By El Hunt and Sam Ramsden
Two UK Cities Are Now In The Running To Host Eurovision 2023
By Sam Ramsden and Rachel Mantock
How To Watch The Queen's Funeral
By Bustle UK
Bimini, Tia Kofi & More React To Cherry Valentine’s Death
By Catharina Cheung
Get Even More From Bustle — Sign Up For The Newsletter