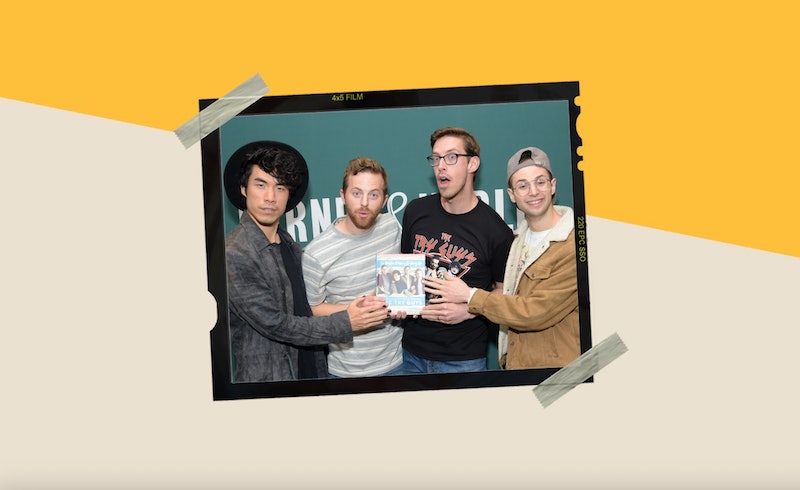 If you use the Internet on a daily basis, there’s a good chance you’ve heard about Ned Fulmer’s cheating scandal by now. On Sept. 27, the YouTube personality and (former) Try Guys member confirmed rumors that he cheated on his wife, Ariel Fulmer, after screenshots of a video surfaced allegedly showing him making out with a Try Guys video producer. “Family should have always been my priority, but I lost focus and had a consensual workplace relationship,” Ned, 35, wrote in a statement. “I’m sorry for any pain my actions may have caused to the guys and the fans but most of all to Ariel. The only thing that matters right now is my marriage and my children, and that’s where I’m going to focus my attention.”

The Try Guys — the comedic quartet that he was a part of since 2014 — immediately informed fans that Ned is no longer a member of the group. “As a result of thorough internal review, we do not see a path forward together,” the remaining trio partially wrote in a statement.

Of course, there are a lot of layers here. And if you didn’t grow up watching The Try Guys on BuzzFeed, or haven’t kept up with the troupe since they set out on their own, you may have some questions. Who did Ned cheat with? And has Ned’s wife responded to the scandal? Or, to quote Seth Rogen, “What’s a try guy?” Ahead is everything you need to know about The Try Guys cheating scandal — and how everyone involved have responded, so far.

Who Are The Try Guys?

Ned and his fellow original Try Guys (Keith Habersberger, Zach Kornfeld, and Eugene Lee Yang) started producing videos together at BuzzFeed in 2014. However, they started their own channel in 2018. The central conceit of their videos is guys, well, trying things — nail extensions, labor pain, and everything on the Olive Garden menu.

The success of The Try Guys led to several spinoff products, like Food Network’s No-Recipe Road Trip — which just premiered in August — and a segment called The Food Babies.

Who Did Ned Fulmer Cheat With?

Alexandria Herring is allegedly the woman Ned had an affair with, reported TMZ and the Los Angeles Times. Alexandria — who is a Try Guys associate producer and a host on The Food Babies — reportedly revealed in a now-private Try Guys video that she’d been with her fiancé, Will Thayer, for 10 years, HITC points out.

According to Page Six and the Daily Mail, a Reddit user sent Will footage of Ned and Alexandria kissing in a club, which is what fueled the affair reports.

How Did Ned Fulmer’s Wife Respond?

Ariel Fulmer — with whom Ned shares two kids — posted a statement on social media and thanked fans for their support. “Nothing is more important to me and Ned than our family, and all we request right now is that you respect our privacy for the sake of our kids.”

How Did The Try Guys Respond?

In addition to their official statement, The Try Guys began rebranding their online presence sans Ned. For example, as several Twitter users pointed out, the group’s social bios now omit a red heart that previously represented Ned’s place in the group.

On Oct. 3, Eugene, Zach, and Keith released a video called “what happened,” in which they clarified the timeline of Ned’s cheating scandal. They found out via fans over Labor Day weekend, they explained. “Thus began a three-week process of engaging with employment lawyers, corporate lawyers, HR, PR, and more, in order to make sure we were taking all necessary steps,” Eugene said.

Ned was also edited out of certain content, while some videos were scrapped entirely, the group explained.

While the group didn’t reference Ned’s affair partner by name, Eugene did end the video with a request for fans. “The internet has a tendency to be a lot harsher towards women, than men, so please, we ask that you exercise kindness.”

Other Responses To The Cheating Scandal

The Daily Mail reports that Will removed all photos of Alexandria from his Instagram account, which is now private. Alexandria hasn’t commented on the news.

Several former BuzzFeed creators also appeared to discuss the controversy — though some have since deleted their initial reactions.

Twitter users shared their reactions to the drama as it unfolded, and several noticed the irony of a resurfaced Try Guys TikTok where Ned says “He’s a 10, but he’s already married.”

Like Rogen, several users took to Twitter to voice their confusion at the Try Guys scandal — including Wonder Woman alum Lynda Carter.

Why Twitter Is Talking About Ned’s Cheating Scandal So Much

How did a Try Guy’s affair garner so much mainstream media attention, and why do we keep talking about it? There’s the timing, for starters: Barely a week has passed since Adam Levine’s alleged infidelity scandal — and both relationships have been characterized by husbands who, historically, were very vocal about how much they loved their wives.

Some fans were also reminded of John Mulaney’s split with Anna Marie Tendler, and his subsequent relationship with Olivia Munn.

While Levine and Fulmer comprise two of the latest celebrity infidelity controversies (in a week’s time, no less) they’re far from the only such scandals in recent news. But their wife- and family-focused personas are a departure from their alleged straying, making them natural subjects for spectators to talk (and worry) about. As Scaachi Koul just put it for BuzzFeed, “If the Wife Guys are cheating, is anyone loyal?”

This article was originally published on Sep. 28, 2022