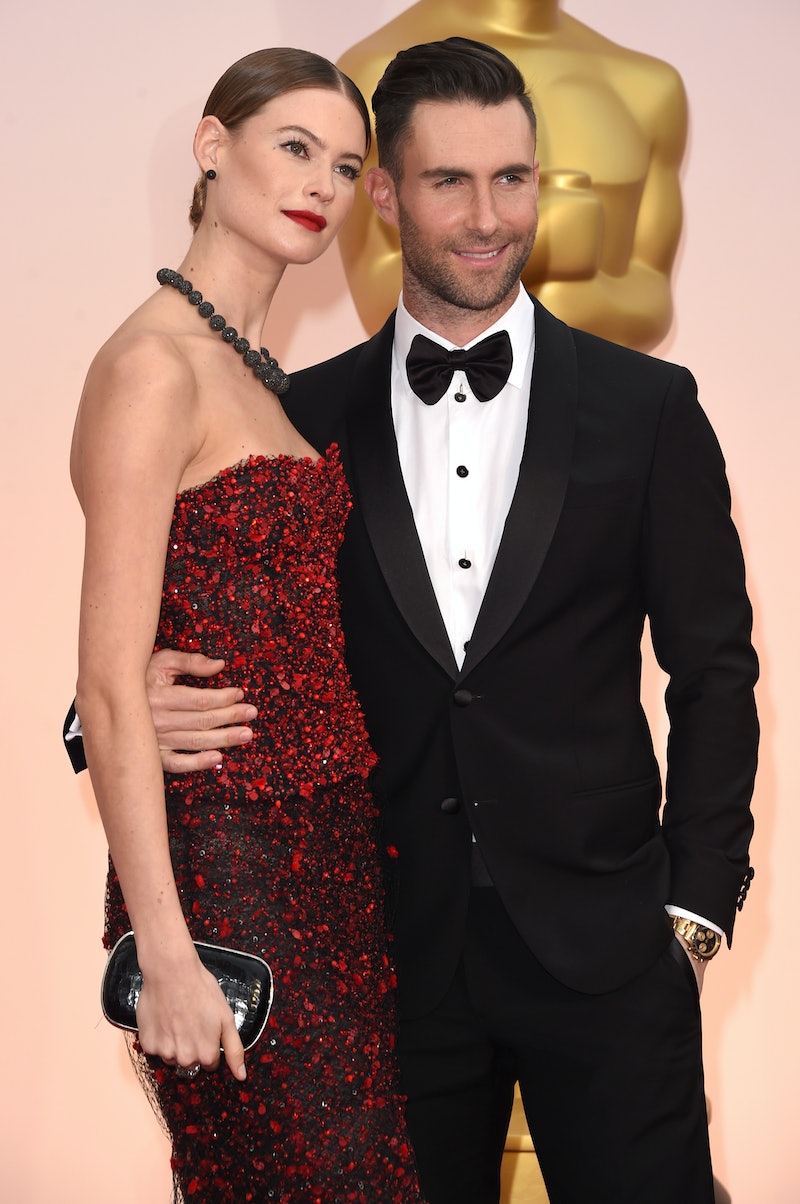 The New England Patriots and the Los Angeles Rams are about to face off at Super Bowl LIII, on Feb. 3. And during halftime, Maroon 5 will face off with Travis Scott. That's how that's working, right? Either way, Maroon 5 is performing at the halftime show, and frontman Adam Levine will likely have his wife Behati Prinsloo cheering him on. The couple have been together for quite sometime and Adam Levine and Behati Prinsloo's relationship timeline shows how much they've been through.

Levine and Prinsloo were both known for their own separate careers before they got together. Levine hit the big time when Maroon 5 blew up in the early 2000s with Songs About Jane, and Prinsloo has been an incredibly successful runway and Victoria's Secret model since 2006. In fact, it was their careers that brought them together. And not just in a stereotypical model and a musician way, either. She almost starred in a Maroon 5 music video before that other Maroon 5 video they did together. (We'll get to that.)

During the Super Bowl, we might get some shots of Prinsloo in the crowd... or private box, or wherever rich celebrities go. But for now, let's take a walk down memory lane and see how these two got to where they are now.

Prinsloo described meeting Levine through a mutual friend in an interview with Porter in January 2019. "Adam was looking for a girl for a music video that could do some action stuff, and our friend was like, 'You should meet Behati because she’s a total tomboy and down for anything,' so he emailed me asking if I could do it. I ended up not doing it, but we kept emailing each other. It was such a natural correspondence that we kind of fell in love over email." They met in person a month later, and she says "it was love at first sight."

Levine and Prinsloo had technically worked together before this. In 2011, when Levine was dating another Victoria's Secret model, Anne Vyalitsyna, he performed at the Victoria's Secret Fashion Show. Prinsloo just so happened to be walking in the show, too.

October 2012 — They Have Their Official Event Debut

As reported by Us Weekly, in October 2012, the couple attended their first event together: the GQ Gentlemen's Ball.

At some point, Prinsloo and Levine split up for a while. It seems that this was towards the start of 2013, as Us Weekly reported in May of that year that Levine was dating Nina Agdal "since early spring." Prinsloo confirmed a split in her recent Porter interview: "We broke up for two months, realized that it was the worst decision, then got back together, got engaged and got married. It was a wild ride!"

Only a couple of months after reports about the split came out, Levine and Prinsloo announced that they were engaged. His rep told People at the time, "Adam Levine and his girlfriend Behati Prinsloo are excited to announce they are engaged to be married. The couple recently reunited and Adam proposed this weekend in Los Angeles."

After a year-long engagement, the supermodel and singer got married in July 2014. 275 guests attended the event in Los Cabos, Mexico, as reported by People.

In September 2014, Maroon 5 released their video for "Animals", which stars Prinsloo as a woman being stalked by a terrifying butcher played by Levine. The very creepy and very NSFW video also includes shots of them making out naked while covered in blood.

September 2016 — They Welcome Their First Child

Prinsloo and Levine welcomed their first daughter, Dusty Rose, on September 21, 2016. They shared the news by both posting the same photo of their new baby on Instagram.

February 2018 — They Welcome Their Second Child

Their second daughter, Gio Grace, was born on February 15, 2018, as Prinsloo shared on Instagram.

Prinsloo and Levine might have gotten off to a bit of a shaky start, but in the six years since they got back together, they've experienced a lot of life together. A wedding, two kids, and one scary music video with a bunch of nudity and fake blood — not a lot of couples can boast that.