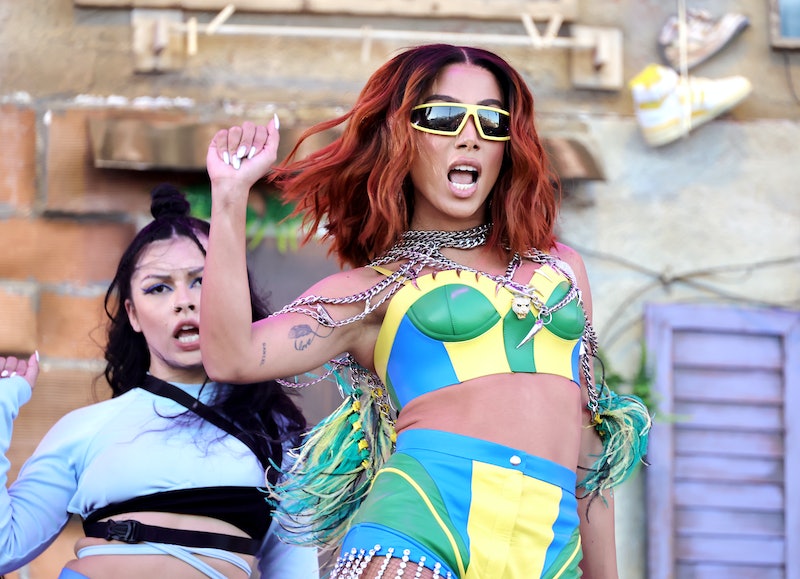 Coachella 2022 is underway, and Anitta made her debut on Day 1 with what may turn out to be the show of the festival. Making history as the first Brazilian to perform on the mainstage, she had bold outfits, big sets, and backup dancers galore. Oh, and just a few celebrity guests. Snoop Dogg, Saweetie, and Diplo were all part of the show, and the entire “bonkers” experience gave fans on Twitter so much to rave about afterward.

Fresh off of becoming the first Brazilian artist to have the No. 1 solo single on Spotify’s global charts with “Envolver,” Anitta had already made her homeland proud. As she told Rolling Stone just days before her Coachella debut, “the whole country is literally, like, stopped.” But on Friday, April 15, she made history again — and she did it with her love for Brazil on full display. Anitta paid homage in different ways, including by opening with a favela-inspired set, wearing the colors of her country’s flag, and having a baile funk-rock band to back her. It all added up to what some fans on Twitter called the best performance of the night, if not in recent Coachella memory, and led to “#Anichella” trending.

Another called it “the best performance [they’d] seen in a long time,” which was a sentiment that was echoed many, many times in tweets about Day 1 of the music festival.

Many fans let it be known that they considered Anitta up there with the headliners. One described her show as not “just a performance” but “an experience.” Others called for her to get the chance to be a headliner in the future.

A lot of people — even those who didn’t start the evening as her fans — were simply in awe. “Oh my god @Anitta ’s Coachella set was FANTASTIC - even if you don’t know her music it was absolutely incredible to watch,” wrote one Twitter user. Another simply celebrated “THAT queen,” and countless others gushed about what she delivered.

Some of the highest praise referenced another legendary Coachella performance: Beyoncé’s iconic 2018 show, aka Beychella. For fans to even mention Anitta’s debut in the same breath (or tweet) as that moment in music history is huge. One fan called her show “the best thing [they’d] seen since Beychella,” so she should rest assured that she made an impression.

Anitta will have the chance to top her first Coachella performance with her second, on Friday, April 22.