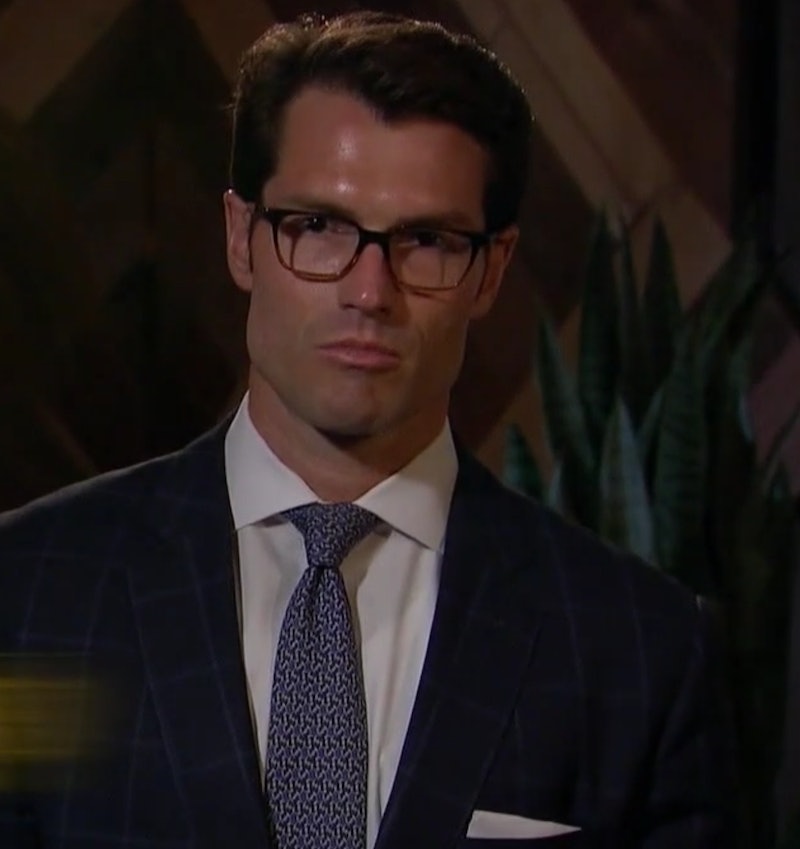 The Bachelorette might need to add "superhero" to its list of weird job titles, because Twitter thinks Clare's contestant Bennett is secretly Clark Kent. "Ok but why does Bennett look like Clark Kent?? Why isn’t Clare into him!?!" one fan tweeted. "Dale might be Superman, but Bennett is Clark Kent," wrote another, referencing Dale's extremely embarrassing party city ads.

This marks a full 180 from the first time Bennett arrived at La Quinta resort. He showed up in a Rolls-Royce wearing a (probably cashmere) white scarf, boasting constantly about his career in wealth management. Upon entering the cocktail party, he spoke incessantly about his Harvard education and ordered many olive martinis. So fans understandably hated him. (Everyone knows you're just supposed to say you "went to school in Boston"!!).

Since then, however, viewers have started to warm up to Bennett. At the end of the Week 2 episode, he showed that he could poke fun at himself, taking Eazy on a tour of "Chateau Bennet" (aka his ridiculously bougie hotel room) and offering him a sheet mask by the jacuzzi. At that point, fans began campaigning for their new "self-care king" to join Bachelor in Paradise.

It could be a while until that happens, considering we're still in the middle of a pandemic. But until then , we'll be patiently waiting for Bennett to rip open a button-up to reveal an emboldened "S" on his chest.

More like this
The 'Bachelor In Paradise' Schedule Shifts To 4 Hours Every Week After The Season 8 Premiere
By Brad Witter
You Can “Fall In Love” At The Resort Where Bachelor In Paradise Season 8 Was Filmed
By Brad Witter
‘The Ultimatum: Queer Love’ Is Officially On The Way
By Radhika Menon and Kadin Burnett
Bachelorette Gabby Kissed Her New Fiancé On 'Dancing With The Stars'
By Jake Viswanath
Get Even More From Bustle — Sign Up For The Newsletter